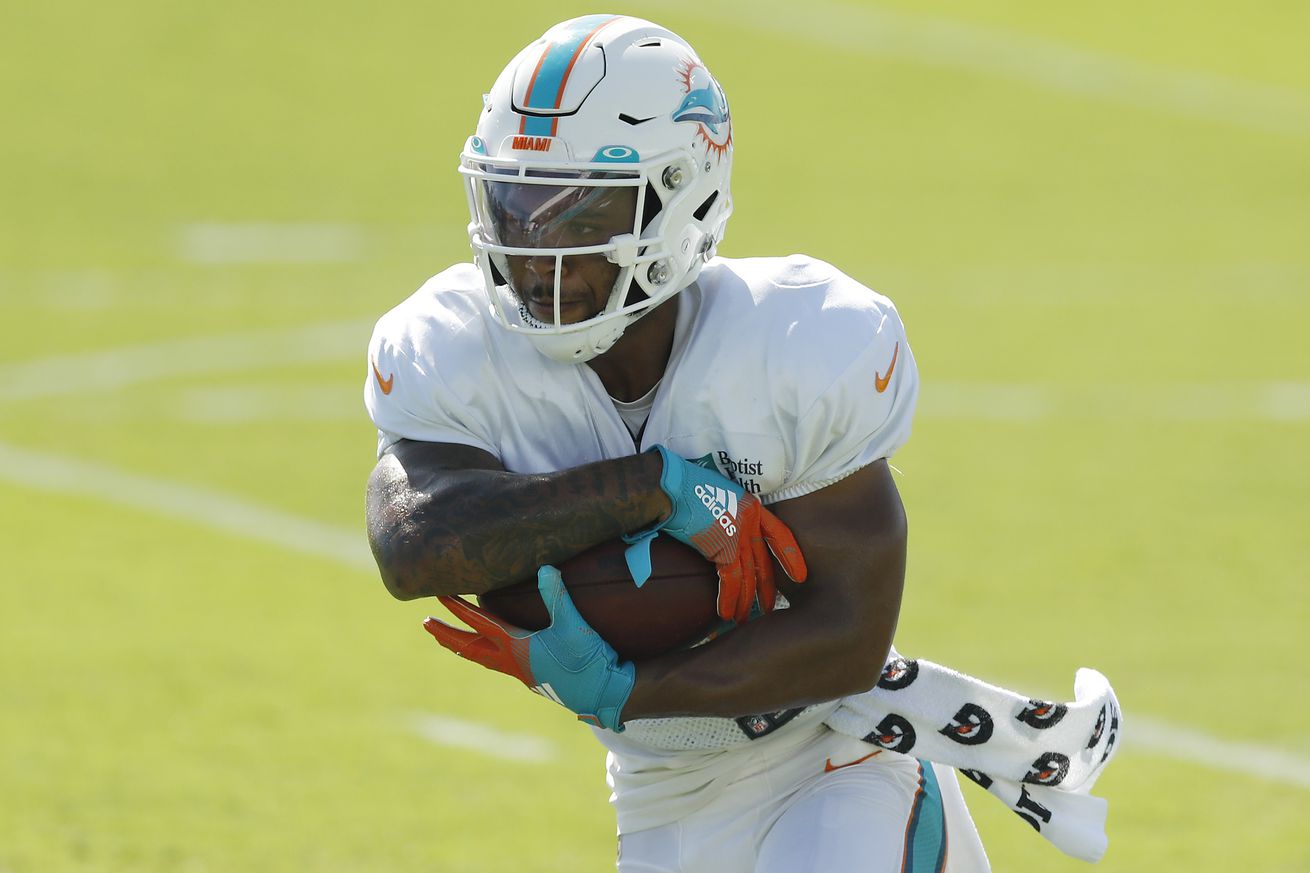 Heading into the 2020 NFL season, we knew there was no way the Dolphins rushing attack could be worse than a year ago.

After all, Miami’s offensive line ranked 32nd in 2019—and featured a rushing attack led by 37-year-old Ryan Fitzpatrick. Fitzpatrick would ultimately finish the season as Miami’s leader in both yards (243) and touchdowns (4) on the ground.

So, what did Miami do to help fix these woes?

In free agency, Miami spent significant funds on Ereck Flowers and, to a lesser extent, Ted Karras. And then in April, the Dolphins drafted three offensive linemen early with Austin Jackson, Solomon Kindley, and Robert Hunt.

But Chris Grier and Brian Flores weren’t done there.

They signed veteran RB Jordan Howard to a two-year deal and traded a fifth-round pick for Matt Breida.

However, it was Myles Gaskin—the former 2019 seventh-round pick— that had the most success out of Miami’s backfield in week one.

And maybe this is something we should’ve all seen coming.

7 receptions on 10 targets for 58 yards. pic.twitter.com/FokXYMnVFl

(Editor’s note: It was brought to my attention on Twitter that this is not something to be excited about. No, probably not. But it does show that his best football could be on the horizon. Translation: Don’t sleep on Myles Gaskin)

First, tip of the hat to Miami’s offensive line.

The young guys Austin Jackson and Solomon Kindley played well. And as a unit, they looked much better than a year prior.

But again, it was Myles Gaskin that took it upon himself to work hard this offseason.

Coach Brian Flores had nothing but nice things to say about the RB earlier this offseason, along with some visual aid.

“i think myles has done a vg job. he’s a kid who has really improved over the course of last season–from OTAs to minicamp to TC, you could see kind of the growth throughout the season. he’s playing well.”-flores

Gaskins didn’t put up fantasy football winning numbers vs. New England. But he did rush for 40 yards on 9 carries, averaging 4.4 YPC. Gaskin looked decisive in his decision-making and showcased his world-class speed when his number was called.

Dolphins QB Ryan Fitzpatrick may have struggled on Sunday, but he had nothing but good things to say about Gaskin’s week one performance.

“It was fun. Myles has had a great offseason and training camp. It was good to see him go out there and put it together in a game and do some good things for us. I think we have a lot of talent back there in the backfield, so those touches will get spread around. It’s a good problem for us to have and (Offensive Coordinator) Chan (Gailey) will do his best to figure out how to do it. It’s a good problem to have that many talented guys in the backfield for us.”

Here’s a look at Myles Gaskin’s performance vs New England.

“myles did a nice job. he broke some tackles. not only in the run game, but in the pass game he made some nice plays, so that was exciting to see today”-ryan fitzpatrick pic.twitter.com/c74d0PjAsc

We don’t know whether Myles Gaskin will be ‘the guy’ in the Dolphins’ running back room. But what we do know is if he can build upon his week one performance vs. Buffalo, it could be only a matter of time before he’s named RB1.

He may not have seen many opportunities in 2019, but he’s done everything he could this offseason to get better and forge a role with the Dolphins. And that’s all you can ask from a second-year player.

How do you feel about Myles Gaskin? Should he get more touches vs. Buffalo or would you rather see how Jordan Howard and Matt Breida fare?

Missed this week’s episode of Phinsider Radio? Click the play button below!