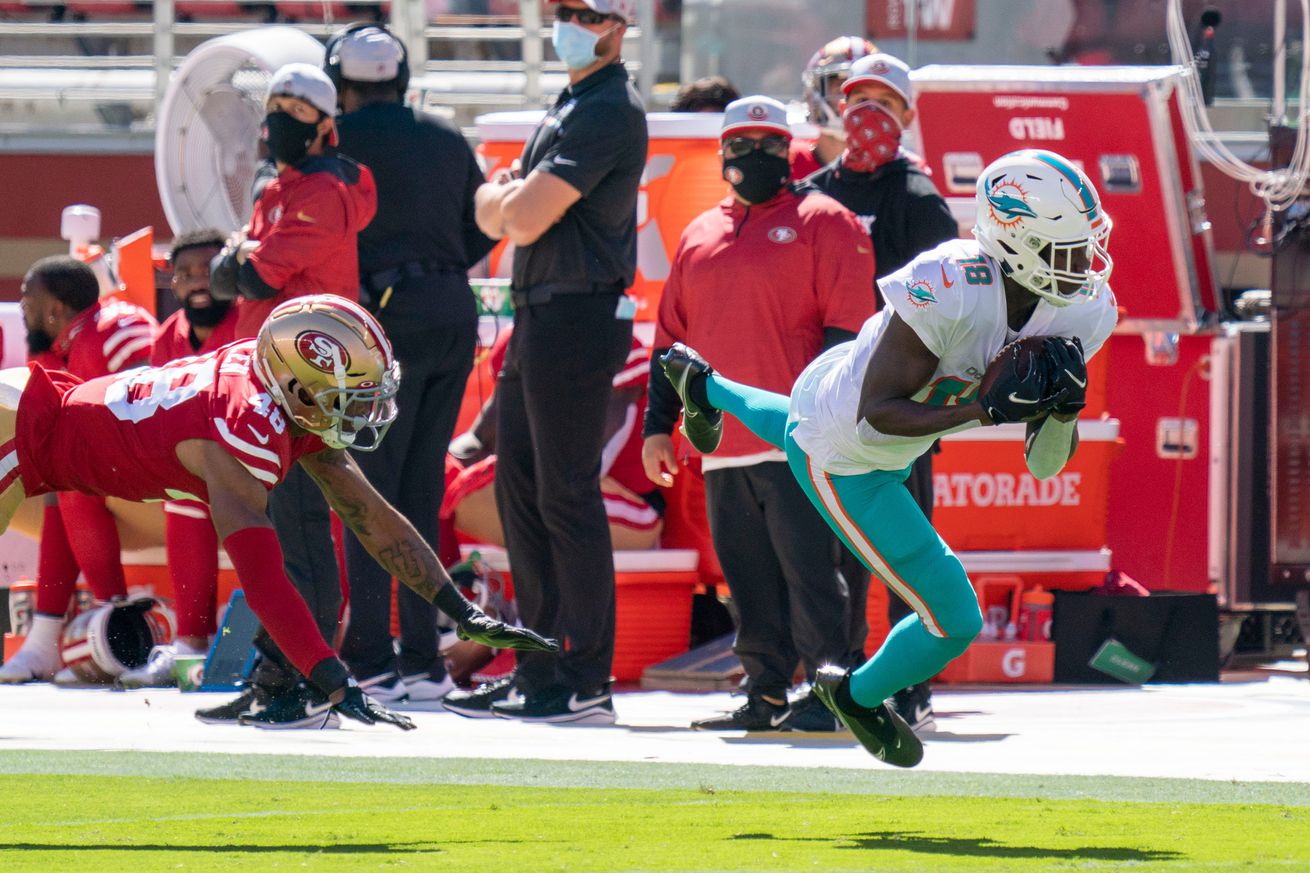 Here’s a 100% accurate scene of what it was like when the Dolphins finished thrashing the San Francisco 49ers.

Let it be said that Mondays are much better after a Dolphin’s win as compared to the typical severe loss. They’re even that much better when that win is a 43-17 shellacking of the defending NFC champions on the road.

However, the day’s description as a Miami Dolphin’s fan can’t start without discussing the chaotic morning of trying to figure out if and when the Dolphins were going to play next. There I am patiently waiting for my Moons over My Hammy from Denny’s, and then Schefter has to drop a mother of all bombs bomb, which was due to the Patriots(of course, it’s the Patriots) having more positive COVID tests. They can’t play the Broncos tonight, and it will be played this coming Sunday. Because of this, Miami’s game against Denver this coming Sunday would have to be postponed. Like everyone else at Denny’s, I plowed through my food, which was delicious, and entered the 1 PM games, not knowing what to do with my fantasy lineups.

Then, somewhere in the afternoon or evening, it comes to pass that the Dolphins will play next week, at home, against the Jets. I have to imagine that Neil deGrasse Tyson and a bunch of other super-geniuses are waiting on stand by to figure out how to do the NFL schedule each week a team screws it all up by not following the rules.

Here’s the updated Dolphin’s schedule. Please be advised that the world gets flipped upside down every day, so don’t go and tattoo this on your forehead.

The NFL has announced changes to our 2020 regular-season schedule. pic.twitter.com/OO7drGTYex

This schedule breaks decently for the Dolphins. I know I’m not the first to think about this or even write about it, but based on how the Dolphins played on Sunday and the easiness of the remaining schedule, the Dolphins, could go on a tear ala 2016. That’s cool.

Oh, and about the game yesterday, here’s what I saw.

The Dolphins defense set the tone by getting off the field in three plays. Nice. It’s always soothing to go on defense to start the game and force a three and out. It makes the next 7-8 minutes of real-time relaxing.

Miami goes on offense and right off the bat…

If Preston Williams can keep his feet during the turn, he scored. #FinsUp pic.twitter.com/381m2saCqo

After that catch, the Dolphins went on to score with a three-yard score to Adam Shaheen. Man alive, it feels lovely to open the game with a stop and then go right down the field and score on your first drive.

Here are all of the catches made by Preston Williams put together by @Houtz, who I think is a savant when it comes to cutting up videos.

.@miamidolphins WR @thresort caught 4/5 targets for 106 yards and a touchdown in sunday’s 43-17 win over san francisco.

here’s a look at every catch from the ‘s career day. #finsup pic.twitter.com/Qy0tLMEQru

Feels like I’ve been saying for weeks that Chan Gailey, and his very progressive offense, needed to look at the tape from last year’s Miami team. That tape shows that Ryan Fitzpatrick had a real good rapport with the receivers, wildly when he threw them 50/50 balls. Parker, Gesicki, and Preston Williams ate up defenses when he just threw it up when they were in one-on-one coverage. That hasn’t happened really at all so far this season. I don’t think the 49ers were the first team to single up any of Miami’s receivers this year, but it was the first time Miami utilized their skills guys’ height and let them go up and get it.

Williams ended up having his best day as a professional. He finished with 4 grabs for 106 and a score. Parker had a modest 2 catches for 50 yards and a TD, and Mike Gesicki got back to taking what’s his. This catch was a good time had by all.

Let’s hope that Chan Gailey is taking all his vitamins and everything he needs to remember what the game plan was on Sunday. Give your enormous receivers the chance to make plays.

Losing Austin Jackson for an unknown amount of time isn’t great. But, the offensive line did a fine job yesterday in keeping Ryan Fitzpatrick upright. Fitz had a clean pocket all day, only getting sacked twice. Jesse Davis did his thing at LT, and Robert Hunt, making his first start at RT and ever, was aggressive and played to the whistle. Check this out;

When he was drafted, I recall a video of Hunt doing his best Michael Ore from the Blindside and blocking a guy 20 yards back. He did this here, and it was a sight to see. Keep it up, big man.

Solomon Kindley is a beast for the Dolphins. We know this, and now Brian Baldinger knows it and is handing out nicknames. I think this means Kindley has made it.

The Dolphins running game had 94 yards, collectively. I think we all want that to be higher. What I want to happen is for Myles Gaskin and Matt Breida to have some body-swapping type situation to happen. No movies are coming to mind where that happens to explain further what I’m looking for, but you know what I mean. Gaskin is solid but Breida can do what he does and more. I don’t know why the coaching staff is making this more challenging than it needs to be. Oh and I can easily see Zach Crockett Jordan Howard being outta here in a few weeks.

Hand up, I’m wrong about my prediction that Tua would be starting next week against the Broncos. However, I feel I never got the chance to, truly, be wrong because the Dolphins aren’t playing Denver next week. Call this a null in void prediction.

The reason why Tua isn’t playing next week is because Ryan Fitzpatrick balled out all day. Fitzpatrick went 22/28 for 350 yards and 3 TDs. He threw the ball on time, under pressure, getting hit and he did it with style and accuracy. This was certainly a Fitzmagic game. It seemed like there wasn’t anything Fitz can do that could ever be considered a bad choice. Next week, he has the terrible Jets at home. Looks like it can be another Fitzmagic type of a day. Anything to get Fitz flaunting his well entuned fashion sense. I dig.

Mike Gesicki on Ryan Fitzpatrick: “He’s the greatest teammate I’ve ever played with… If I could play with him for the next 15 years, I’d do it.”

Feel like a Fitzmagic & Tua reality show is something this world really needs #MustSeeTV ✨ #TheAdventuresOfFitzAndTua pic.twitter.com/95qLuEq2qA

Tua time will come. But probably not for a few weeks if the Dolphins go on a slight winning streak.

Mark Schlereth is pretty close to unbearable. He talks way to much and it’s mostly drivel. At one point he said that a high ankle sprain can feel like a broken leg. To everyone that has ever broken a leg, I apologize for what Mark Schlereth said.

Of Ryan FItzpatrick’s 168 passing yards, he has featested on Brian Allen for 124 yards.

The Dolphin’s defense was fierce. Their front 7 controlled the line of scrimmage(yeah I know Mostert had 90 yards rushing) and were in the quarterback’s face, all of them, all day.

Jerome Baker got there in a FLASH ✨ @Lastname_Baker @MiamiDolphins pic.twitter.com/o82Z3wpVIr

Over the last few years Emmanuel Ogbah low-key has had one of the best cross-chop techniques in the NFL. pic.twitter.com/O4okx0XtIN

You get a TE 1v1 as an edge rusher, you gotta get those wins.

That’s all the sacks that Miami had. I felt it was important for you to see them all.

What I liked the most was the timing that the blitzes had. Baker, Van Ginkel and a few other plays that were just pressures were timed up perfectly. When Miami can time it up right, they can get a lot done. I know I know, that’s A+ analysis. But it’s still true.

Van Ginkel, Sieler and Wilkins are the guys in the front 7 that stood out to me. Wilkins stuffed some early running plays, Sieler filled in tremendously for Lawson, and Van Ginkel has an “it factor” to him where just in on big plays. Actually, Sieler has that as well.

The backend of the defense had themselves a day as well. San Fran only had 128 yards passing and there was loads of garbage time that you would have thought they would have gained more. The return of Byron Jones was exactly what this defense needed. Who knew being a top 5 paid CB in the league could play good football?

Have you seen a worse final two minutes for an offense that what the 49ers did to end the first half? The INTs by McCain and Howard were the easiest they’ll ever have. Jimmy G wanted out of the game but I think he could of just said he was still hurt.

Props to Eric Rowe. He’s being dubbed the tight end eraser. I think that name can be improved on but that’s what we’ll go with for now. Kittle had 4 catches for 44 yards largely due to Rowe being all over him.

Here’s a compellation video of the Dolphin’s defense.

Another Mr. Perfect like performance from Jason Sanders. The guy has made 14 straight this year.

Sweet fake FG. It was the right time to do it and the momentum gained probably took all the life out of the 49ers.

I understand that the 49ers are nowhere near where they were from a year ago. They have a ton of big time players on defense that are out or elsewhere. Jimmy G not being at 100% was also a factor. Whatever. The Dolphins did exactly what a good team does to a wounded team and that’s finish them. They finished them off early. They put the game out of reach by the second quarter. That never happens with this team.

I said a few weeks ago that Miami could lose to Seattle, which I said was defining game, beat San Fran and go on a run. I still feel that way. The schedule loosens up going forward and Miami, at the moment, have a lot of confidence. Obviously, it will do them well to keep that going into next week against the Jets where Miami is a 8 point favorite. Miami should b able to handle that expectation. Feel good this week.

By the Way- My bad for not getting this out on Monday. Life got in the way. You understand.