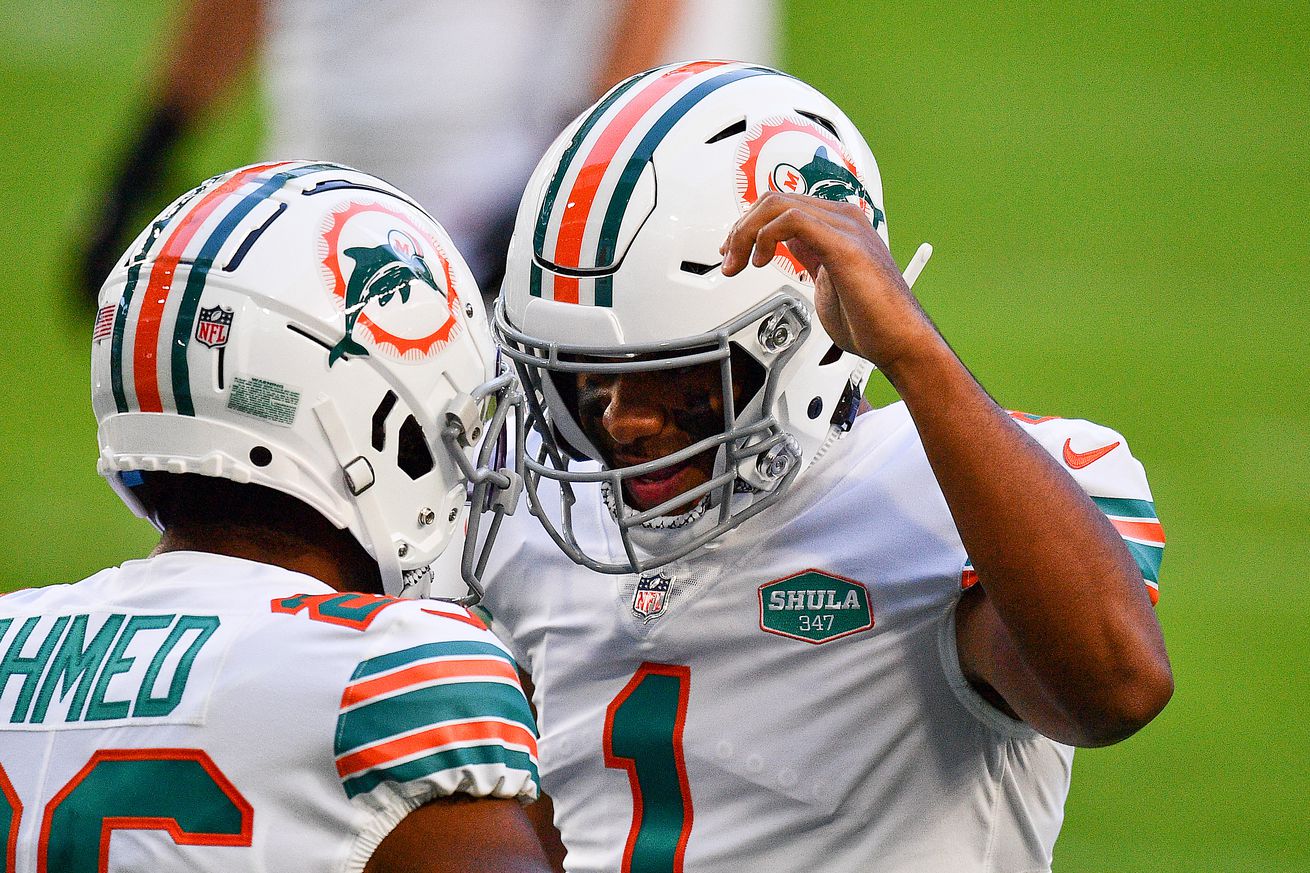 It was a battle of the rookie quarterbacks with Tua Tagovailoa coming away with the team victory. The Dolphins are on a 5 game win streak and Tua has won his first three games since taking over the starting job at quarterback. We also saw another rookie have a big game as Salvon Ahmed handled the lead back duties while also scoring his first rushing touchdown. The Dolphins will be traveling to Denver next Sunday to take on the Broncos and look to add another win to their record.

Tua Tagovailoa’s efficiency keeps Dolphins on winning track – Miami Dolphins- ESPN
Miami wins its fifth game in a row, and their third with Tagovailoa, who is playing mistake-free and has the Dolphins in the thick of the playoff race.

Dolphins win fifth consecutive, beating Chargers 29-21 – ProFootballTalk
The Dolphins started 1-3. They now are 6-3 — their best start since 2001 — after winning their fifth consecutive game, the last three of those started by rookie quarterback Tua Tagovailoa.

Miami Dolphins News 11/14/20: Previewing Sunday’s Game Against The Chargers – The Phinsider
Welcome to the Splash Zone, the quickest way to get your day started off right. We bring you a rundown of Miami Dolphins news from the last 24 hours.

Dolphins DE Emmanuel Ogbah has been everything the team has hoped for – The Phinsider
In 2019, the Miami Dolphins defense was among the worst in the NFL at getting pressure on the quarterback. It was bad and played a large role in Miami’s poor defensive play down the stretch.

Week 10 NFL betting lines and picks – The Phinsider
We’re back at it again after a 3-1 week last week. The Texans -7 AND the under 50 hit (so that would’ve been a parlay hit, for those playing at home), as did the Raiders eeking out a win at…

NFL Week 10 schedule: Dolphins fan rooting guide – The Phinsider
The Miami Dolphins host the Los Angeles Chargers later today. Miami is on a hot streak, having won their last four games and setting themselves up for a playoff run as the NFL moves to the second…

Chargers vs. Dolphins preview: Talking Justin Herbert, LA’s red zone struggles, and more with Bolts from the Blue – The Phinsider
We are only a few hours away from the Miami Dolphins kicking off against the Los Angeles Chargers. The game, which will feature two rookie first-round quarterbacks, kicks off at 4:05pm ET on CBS. I…

Chargers vs. Dolphins inactive players list: Jordan Howard, Matt Breida both inactive for Miami – The Phinsider
The Miami Dolphins will be without their two free agent acquisition running backs on Sunday as they host the Los Angeles Chargers in a Week 10 contest. Jordan Howard, originally listed as Miami’s…