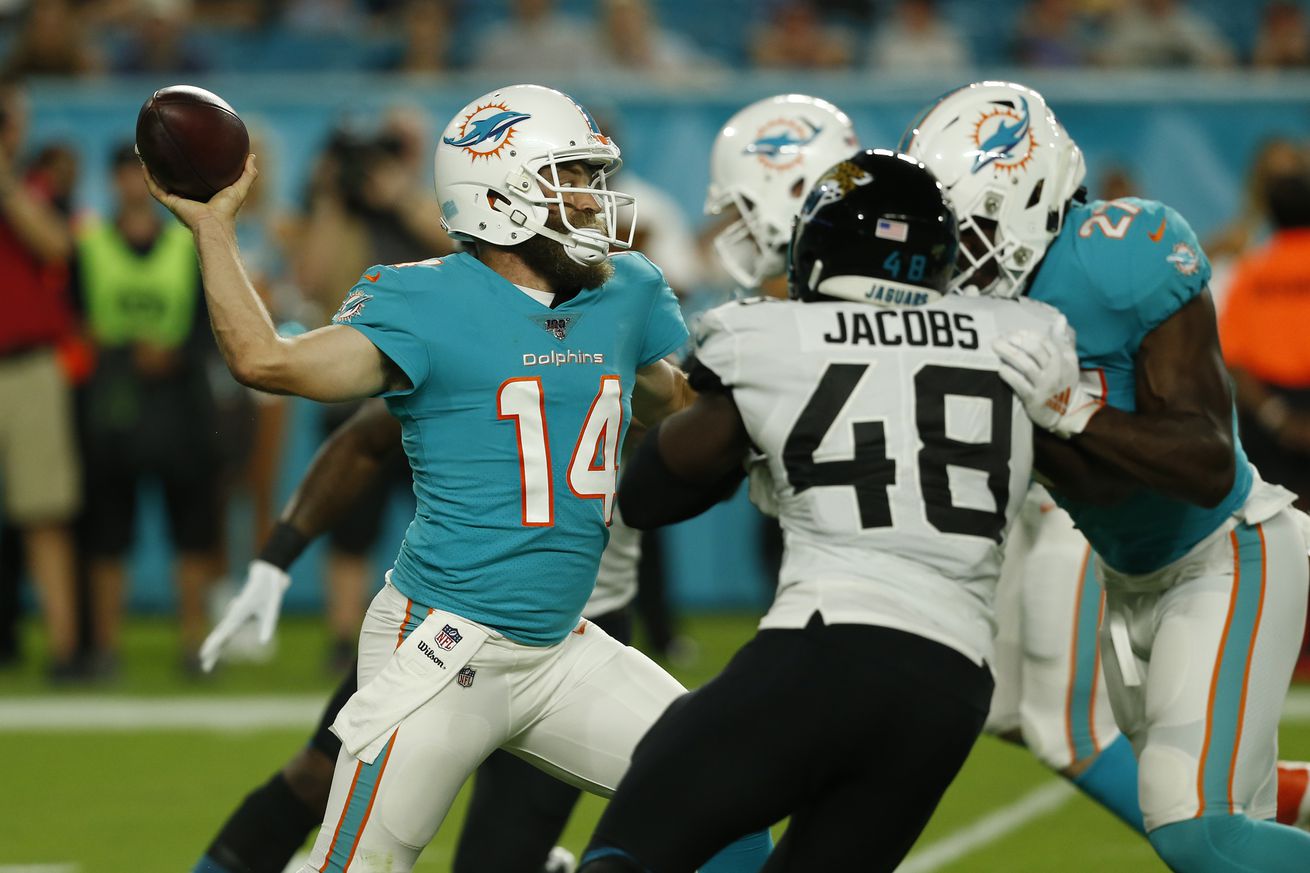 Tonight’s Thursday Night Football game between your Miami Dolphins and the Jacksonville Jaguars will serve as our one and only prime time game this season so lets hope the Dolphins decide to make it a good one for us fans. The in state matchup has garnered more attention over the facial hair of the two starting quarterbacks than anything else this week it seems. Yes, our very own Fitzpatrick has a magnificent beard by any standards, there is no denying this. What I am not sure about is why Gardner Minshew is getting so much pub over his facial hair that, at least here in Texas, seems as common as a Dallas Cowboy’s sticker on the back of a pickup truck (just a little peek inside of the nightmare that is being a Dolphins/Hurricanes fan living in Texas).

Speaking of Gardner Minshew, he has spent the first two games of the season making a strong argument to be the long term answer at quarterback for the Jaguars. Minshew has already thrown for six touchdowns on the year (3 in each of the first two games) on the way to upsetting the Indianapolis Colts in the Jags week one contest and nearly upsetting the Tennessee Titans this past Sunday. He came away from the game against the Colts with a stellar 142.2 QB rating after completing 19 out of 20 of his pass attempts. Sunday he attempted his best imitation of Brett Favre by throwing the ball 45 times for 339 yards (his career high). Minshew also has a knack for scrambling out of trouble. We have seen some of the better scrambling quarterbacks in this league give the Dolphins defense fits over the years. Lets hope tonight is not another one of those games.

Despite the Phins loss this past Sunday, in a game that the Dolphins could have clearly won had the secondary not looked completely lost in the second half after losing Byron Jones in the first half, Fitzpatrick had a decent game. He finished the game with 328 yards passing and two touchdowns while not throwing any picks. This coming after his three pick game against the Patriots, although two of those three picks were not solely on Fitz. Fitzpatrick will need another solid outing it seems if they wish to knock off the Jags after Jacksonville’s defense managed to hold the reigning NFL rushing champ, Derrick Henry, to 84 yards on 25 attempts Sunday. Even so, I expect to see the Dolphins continue to try and improve on the ground tonight after the first two games has reminded too many of us fans of last season when the leading rusher on the year was Fitzpatrick with all of 243 yards.

In addition to the Dolphins needing Fitzpatrick to have a good to great game tonight the secondary is going to have to get their glaring problems from last Sunday addressed before kickoff this evening. The Phins will once again be without Byron Jones for the game tonight, only making the problems they had last week stand out even more this week given how well Minshew has played up until now. Miami can not afford another showing like in the Bills game where Stefon Diggs put up 153 yards receiving on only 8 receptions as part of quarterback Josh Allen’s 415 yards passing and 4 touchdown day. On the other side of the ball the Dolphins will hopefully continue to see the success that tightend Mike Gesicki had last week with his career best 130 yards on 8 receptions, including one touchdown. Another positive for the Phins offense is that DeVante Parker will be starting after his availability was questionable earlier in the week.

Please use this live game thread to discuss this evenings Thursday Night Football game between your Miami Dolphins and the Jacksonville Jaguars. As a reminder, continue to follow all site rules during any live game thread, especially the ones that do not allow ANY personal attacks or ANY mention of anything of a political or religious nature. Also remember that requesting, sharing or discussing of any illegal game streams on this thread or any other thread on the Phinsider or any of SBNations other sites is strictly prohibited and can result in a warning or a ban from the site and the platform.