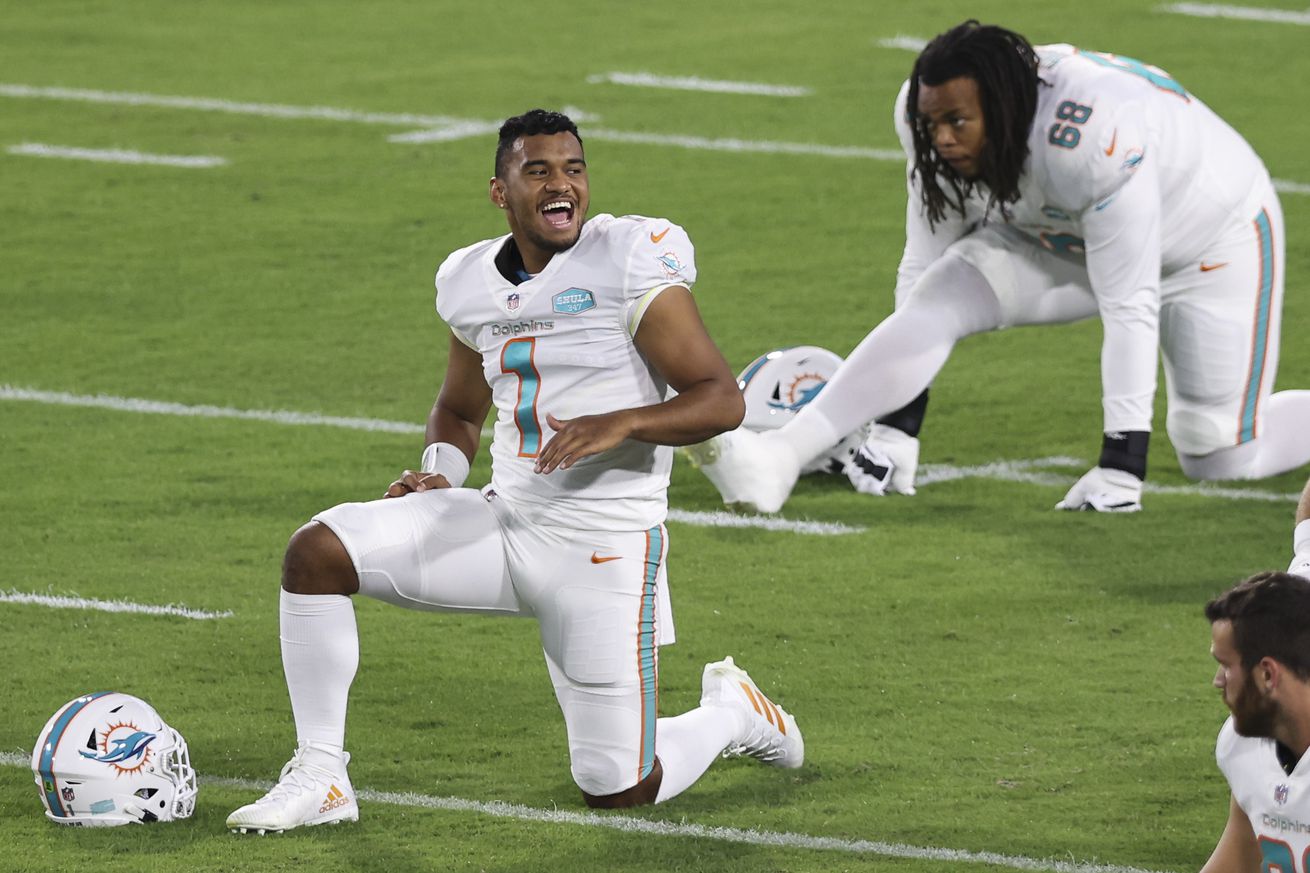 That is the question

I’ve managed to avoid talking about Tua almost entirely. It feels like a full decade went by where I couldn’t open my browser without being force fed twenty articles about a guy who is yet to play a snap.

But now: maybe he should play a snap? Or a lot of snaps? Or no snaps. Let’s cut him. Who’s to say?

But we can at least baselessly speculate and rabble rabble harumph as fans are wont to do.

The Case for Playing Tua

A quarter way (gross) through the season, the Dolphins are 1-3. That is bad. Mathematically, that’s almost the worst they could be. I checked.

Ryan Fitzpatrick isn’t the sole cause for the poor record, but he’s played like he has his whole career: hot and cold. Fitzmagic and Fitztragic. Chiefs and Jets. Anyone and Jets. If Tua is worthy of the 5th overall pick we spent on him, shouldn’t he be better than ‘sometimes Jets’?

The offensive line has performed better than expected. One of the primary reasons for leaving Tua on the sidelines is fear that our sentient road cones will get him David Carr’d back there. But they’ve been pretty good. I don’t have the PFF ratings, but my eyeballs tell me that Fitz hasn’t lost a limb yet and that’s marked improvement from every past season.

He’s had 10 months to heal and he’s listed as the backup, so he must be healthy and ready to go. We can’t leave him in bubble wrap his whole career. The best way to learn is to play, not by holding a clipboard.

Look at Tua’s contemporaries. Joe Burrow is playing well and picked up his first career win this week. Justin Herbert (picked immediately after Tua) looks like the real deal for the Chargers. This is Drew Brees and Matt Ryan all over again.

Author’s Note: I personally can’t wait for Anthony Lynn to go back to Tyrod Taylor once he’s healthy, but that’s just my schadenfreude talking.

So why is Tua the only top 10 QB not playing? That makes him a bust. It’s been 4 games and he hasn’t fixed the franchise, so Grier wasted another top pick and needs to be fired along with Flores. Sell the team, hire Jim Harbaugh, bring back Tannehill, put the helmet on the dolphin.

The Case Against Playing Tua

Maybe he’s not ready. Maybe the staff wants him to learn as much as possible mentally behind a (much) more seasoned vet a la Aaron Rodgers, Pat Mahomes, etc. Maybe doctors want him to ease back into it more than regular season NFL football would allow.

Maybe we should realize that even if any or all of those things are true, he’s not a bust. It’s Week 5 of his rookie year and he hasn’t played a single down. That’s a sample size of 0.

bUt iF He WaS gooD he’D bE playing

See above. I really want to see him play too, but I can be patient. I bet Aaron Rodgers would have been pretty good his first four weeks as a rookie, but we’ll never know because he sat. Not every situation is created equally.

Joe Burrow should be good. Dude was taken 1st overall and his competition is a backup in Dallas. He’s playing because if he wasn’t, one of us would be. Tyrod Taylor got stabbed in the lung by a ‘doctor’. That’s why Justin Herbert is playing. That said, he’s playing well and, if they’re smart, he’ll never stop playing. But even if Taylor didn’t get injured, Herbert’s hurdle to playing time is a guy who threw 6 passes in 2019. And played 4 games in 2018. I know Fitz isn’t a world beater, but he’s better than Tyrod Taylor.

I’m not saying Tua’s the second coming of Marino. He could be. He could also be another wasted pick. But calling him a bust at this point is a waste of everyone’s time. We’ll get to see him play and hopefully he’ll be everything we need at QB. But for right now, he’s just a rookie who hasn’t played a down. Give him some time.

Please, like I know what the Dolphins will do.

If these Dolphins are the same Dolphins I’ve seen my whole life, I’m looking for the headline that Sage Rosenfels is starting this week.