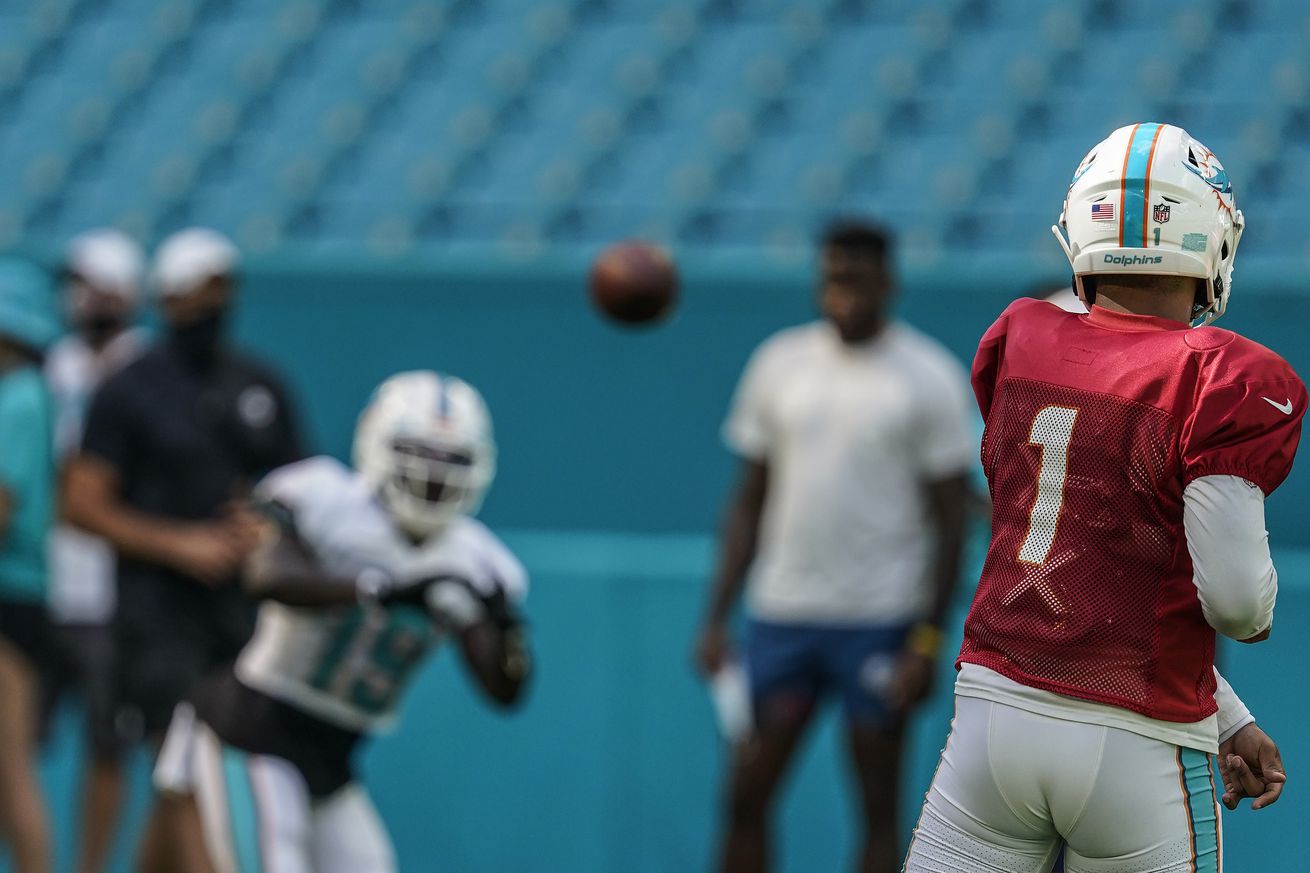 The Miami Dolphins held a scrimmage on Saturday, their first game-like work of the summer. In a year with no preseason games, srimmages are going to be critical in the team’s preparation for a season that starts in two weeks. After the team’s first scrimmage, where he took most of the first-team snaps, rookie quarterback Tua Tagovailoa reflected on the practice.

“I think there was some good today,” Miami’s first of three first-round picks in 2020 said. “There was also some not so good. But I think it was a learning curve for me and a lot of the rookies. There’s some things that we need to clean up offensively on my end, and things in general with communication; and then for me, not turning the ball over in situations. So being better with situational awareness, down and distance, and then communication, and that’s why we got film, too, to be able to go over that. So after this interview, I’ll probably go and look at the film and get ready for our meeting tonight with what our coaches have to say.”

Tua, according to the South Florida Sun Sentinel’s Safid Dean, was around 13-for-23 for 119 yards with an interception during the scrimmage. He picked up eight yards on a run. He was thrust into the first-team role when presumed starting quarterback Ryan Fitzpatrick left the practice following the death of his mother.

The offense under Tagovailoa was only able to convert two field goals on the day. Josh Rosen, competing for the primary backup position with Tagovailoa behind Fitzpatrick, was 11-for-24 for 143 yards with a touchdown pass. Tagovailoa was leading the offense on a potential game-winning drive near the end of practice when head coach Brian Flores swapped in the second-team offense.

“We pulled the whole offense and the defense,” Flores said when asked after practice about the decision to pull Tagovailoa for that drive. “Yeah, we pulled both teams. So we only have two quarterbacks, so he was in on that group, so we pulled him. We pulled the entire offense. (Josh) Rosen, you know, yeah, so we put Rosen back in.”

“I was hoping to be able to finish that drive,” Tagovailoa said of the switch in teams. “I don’t know what happened; but hey, that’s how the game goes. You do all you can until something happens, and like I said, you can only do as much as you can.”

Continuing to look at his overall performance on the day, Tagovailoa explained, “I would say first off, my overall thoughts on my play wasn’t to where I want it to be. I don’t think anyone today is where they want to be; but to me, it’s really not taking it a series at a time. It’s more so a play; what can I do to put our offense in the best position on this play. And like I said, there were some good, there was some bad, and it’s just an opportunity to continue to learn, continue to grow. Communication with the guys is going to be key coming to the sideline and then in practices that we are going to have.”

Continuing to grow and communicating with his teammates and his coaches will be the key to Tagovailoa’s development. Fitzpatrick will resume his role as the team’s starter whenever he feels he is ready to return to the team, but Tagovailoa will continue to fight to prove he is ready if Fitzpatrick is not back for Week 1.