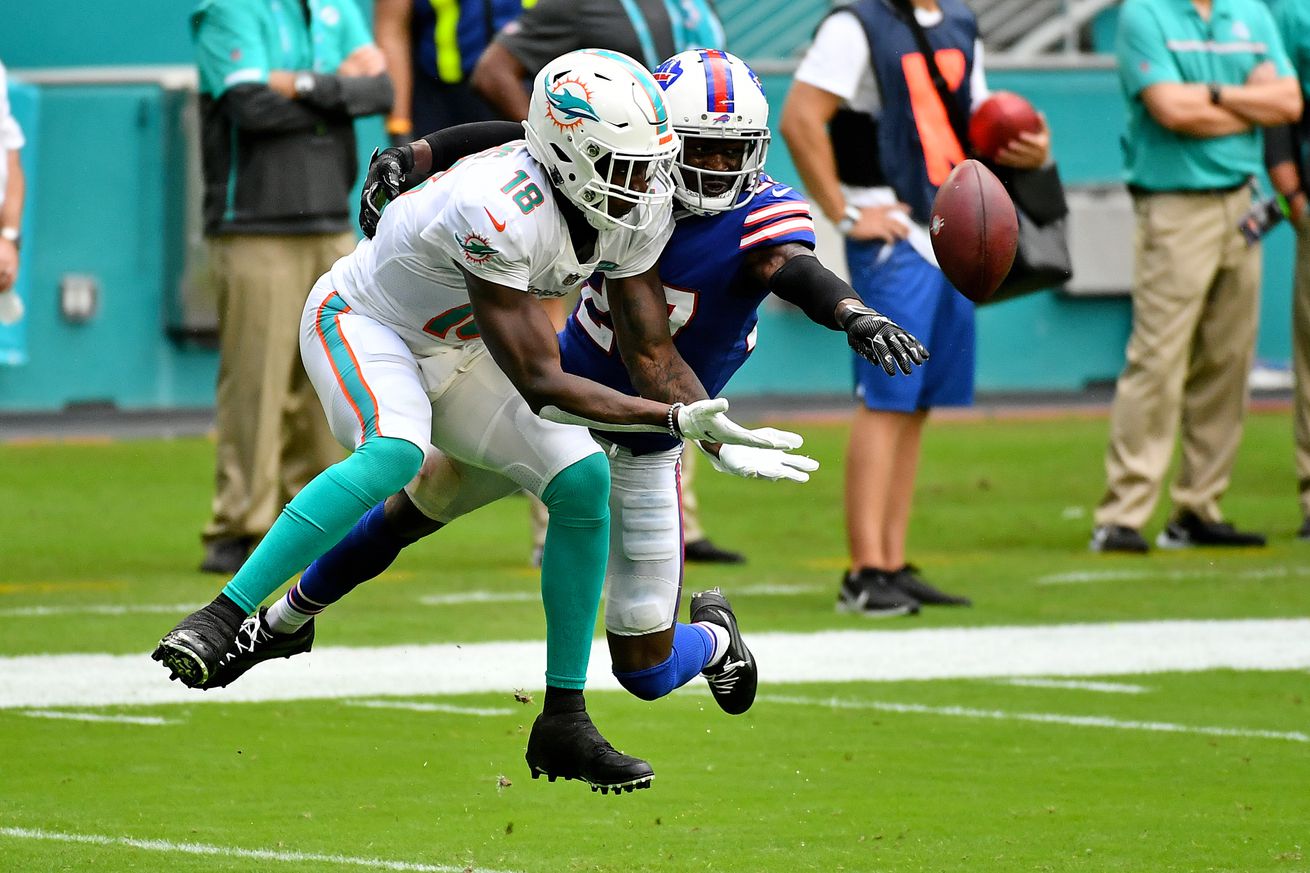 Miami has played two regular-season games, so we are beginning to understand what talent they have on this roster. All players can improve, but most do not make a jump from awful to all-pro in a week. Using Pro Football Focus, we can look at how we can add offense production by subtraction.

The Miami Dolphins have played two regular-season games, so we are beginning to understand what talent they have on this roster. All players can improve, but most do not make a jump from awful to all-pro in a week. Using Pro Football Focus, we can look at how we can add offense production by subtraction.

One offensive area where the Dolphins need to improve is something they spent draft capital and free-agent money to correct, the running game. All Miami Dolphins players have a combined 186 yards on the ground in two games on 44 attempts with a 4.2 yards-per-attempt average. There is nothing special about those numbers considering that they focused on improving the running game after a 2019 campaign where quarterback Ryan Fitzpatrick led all Miami players in rushing yards. The Dolphins upgraded their line with known commodities in center Ted Karras and guard Ereck Flowers. They also drafted massive maulers during the 2020 NFL Draft including tackle Robert Hunt and guard Solomon Kindley. Both were touted as powerful man movers. During Week 1, most of the starting five offensive linemen graded out as average or just above average in pass protection but struggled in run blocking. The struggles for run blocking continued against a stout Buffalo Bills defensive front in Week 2. Every one of the starting five graded out below 60 according to Pro Football Focus. With limited offseason and no preseason games, the best way to improve this unit is by giving them more time together.

Miami’s running backs have started to separate themselves on the field. Myles Gaskin has 16 rushing attempts, gaining 86 yards, with an average 5.4 yards per carrying over the first two games. Matt Bredia has 12 rushing attempts, gaining 59 yards, with a 4.9 yards-per-carry average over the first two games. Leading into the 2020 regular season, the common speculation held Jordan Howard as the opening day starter. Two weeks into the season, he has a limited 13 carries for only 11 yards, giving him a 0.8 yards-per-carry average. It appears he will be taking fewer snaps moving forward, unless the team turns to him in short-yardage situations. The awful blocking up front with a young offensive line should not be surprising, but all three backs are running behind the same five linemen, so the best performer, Gaskin, should be given more carries.

Both rookie starters struggled in the passing game; Austin Jackson and Solomon Kindley graded out 33.5 and 30.2 respectively for their Week 2 pas-blocking performan against the Bills. As a whole, the offensive line allowed one sack, five hits, and 11 hurries for 17 total pressures. Quarterback Ryan Fitzpatrick, according to PFF, is accountable for two-sacks, one hit, and one hurry for four total pressures due to holding onto the ball too long. To expect this line to perform at a Pro Bowl level would be naïve, especially without any preseason games to give them time to gel, but there is no need to panic over the pass protection just yet.

Two players stood out after re-watching the Buffalo game; Mike Gesicki is knocking on the Pro Bowl’s door, playing more as a slot receiver than an in-line tight end. He was targeted ten times, catching eight passes for a Dolphins single-game record for tight ends with 130 receiving yards. His strong play allowed Miami to crawl their way back to a close game. Also, Isaiah Ford looked good catching seven of his eight targets for 76 yards. DeVante Parker looked to be fighting through his leg injury from last week, but still hauled in five of his eight targets for 53 yards. Preston Williams may still not be 100% after knee surgery last season, so allowing Ford to play opposite Parker should be considered by the Miami coaching staff.

The Dolphins should take a wait and see approach to their young offensive line. If they can make people afraid of the run game, the balance will allow for their passing game to improve. Giving Myles Gaskin, Matt Brieda, and Isaiah Ford more opportunities and limiting the roles of Jordan Howard and Preston Williams should do enough to change this offense’s dynamics. Miami played two 2019 playoff teams to start the season with a very young roster, wins will come, have patience, and Phins Up.