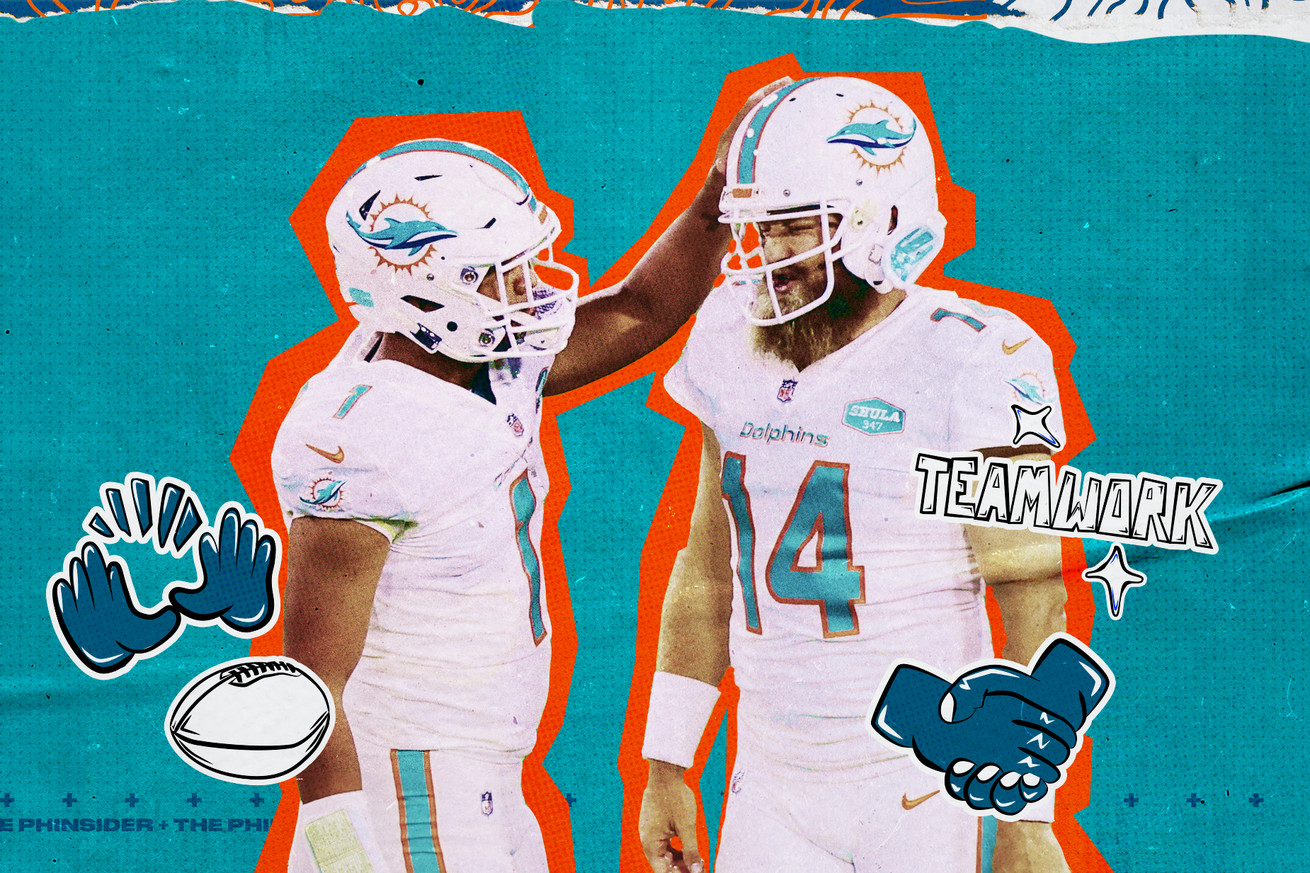 The bond these two share is strong and special.

The 2020 NFL season is a unique one for many reasons. From the lack of preseason to empty stadiums, there are so many things that are different about this season. When it comes to the Miami Dolphins, there is another odd thing happening this year: hope. The Dolphins have long been a franchise rooted in mediocrity. Even when they seemed to take a step forward, the Dolphins would find themselves falling right back to a middle-of-the-pack, on the outside looking in on the playoffs.

This year, things are different because the team used the fifth overall selection in the 2020 NFL Draft on quarterback Tua Tagovailoa. The team then moved to start Tagovailoa in Week 8, using the bye week to transition from veteran Ryan Fitzpatrick to the rookie. It was a move that led Fitzpatrick to explain, “I was shocked by it. It definitely caught me off guard and it was a hard thing for me to hear yesterday. Just kind of digesting the news, my heart just hurt all day. It was heartbreaking for me.”

Miami was 3-3 on the season, having won two straight games by a combined 67-17 score, under Fitzpatrick. The move was a surprise, and there was speculation that the decision could tear Miami’s locker room apart as players side with the quarterback who was winning games over the move to an unproven rookie. Analysts seemed to say, if Tagovailoa could not prove he was ready to control an NFL offense, the Dolphins locker room would split, with coach Brian Flores losing the team.

When meeting with the media for the first time as the Dolphins’ starting quarterback, Tagovailoa reflected on Fitzpatrick and how the news of being elevated to starter meant his friend had to head to the bench.

“I was very excited,” Tagovailoa explained. “That’s news that I think anyone would love to hear, being named the starter at any position. But at the same time, I also felt for Fitz as well. Me and Fitz had a conversation about all of this. Like I’ve continued to say, although it kind of hurts me in a way to see Fitz hurt, I’m just very, very lucky to have someone like Fitz in my corner, regardless of the situation we’re in right now.”

The love and respect between Fitzpatrick and Tua have been seen from the moment Tagovailoa’s name was announced in the virtual draft this year. Back in August, when the team reported to training camp and the media had a chance to speak with Fitzpatrick for the first time since the Draft, the veteran explained, “I don’t know how much time it’ll be before Tua (Tagovailoa) is in the lineup. I know that I am the placeholder and we’ve already had that conversation. I told him I’m going to do the best I can to lead this team and to win football games when I’m out there and whenever it is that Tua gets his chance, whether it’s early or late or whenever it is, I’m going to be his biggest cheerleader and that’s what I said earlier; but I think I have a unique perspective just from the career that I’ve had and I was excited that they drafted him and since meeting him in person finally the other day, I’m really excited. I think we’ve really hit it off and even though I’m an old geezer to him, we’ve meshed personality-wise and I’m excited to work with him.”

And work with Tagovailoa, Fitzpatrick has. Every game Miami has played this year, after every offensive series, Fitzpatrick and Tagovailoa have been on the sidelines, going over the drive, with Fitzpatrick breaking down what he saw and the decision he did or would have made.

When Tagovailoa entered the Dolphins’ Week 6 game against the New York Jets for the final two minutes, it was Fitzpatrick who was leading the cheers for the rookie’s NFL debut.

.@Tua Tagovailoa enters the game for the @MiamiDolphins! #FinsUp

Coming into the season as a veteran starter in a position that only allows one player to play, and knowing the team just selected your replacement in the first round of the NFL Draft cannot be an easy situation. You are being asked to mentor the player the team wants to take your job. You know it is only a matter of when, not if, you are benched. Yet, the professionalism of Fitzpatrick never let that become an issue.

Coming into a season as a first-round pick and ready to prove you are the next great NFL quarterback, but having to sit on the bench behind an incumbent starter cannot be an easy position, either. You are being asked to check your ego at the door, recognize you are not yet ready to start in the NFL and use the time to learn from the veteran. You know you will get your chance, but you have to be patient. Tagovailoa’s professionalism — even as a brand new professional — never let that become an issue.