The Dolphins have extensive resources devoted to the cornerback position, having added impact free agent Byron Jones and used a first-round pick on Noah Igbinoghene. The team will be able to pair those two with its top holdover corner throughout the season. 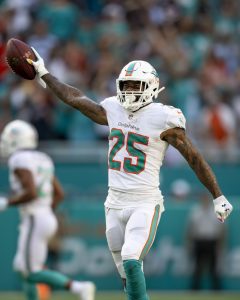 Xavien Howard, who saw a domestic battery charge dropped this offseason, will not be suspended, Hal Habib of the Palm Beach Post reports. The five-year veteran defender was arrested in December for an alleged incident involving his fiancee.

In Howard and Jones, the Dolphins have two of the three highest-paid corners in the league. The former has spent his entire career in Miami. Howard has not played since last October. The Dolphins shelved him on IR in October after he sustained a knee injury. Howard, however, did not suffer a ligament tear.

Howard was a Pro Bowler in 2018, having led the NFL with seven interceptions. Months later, the Dolphins made him the NFL’s highest-paid cornerback with a five-year, $76.5MM extension.