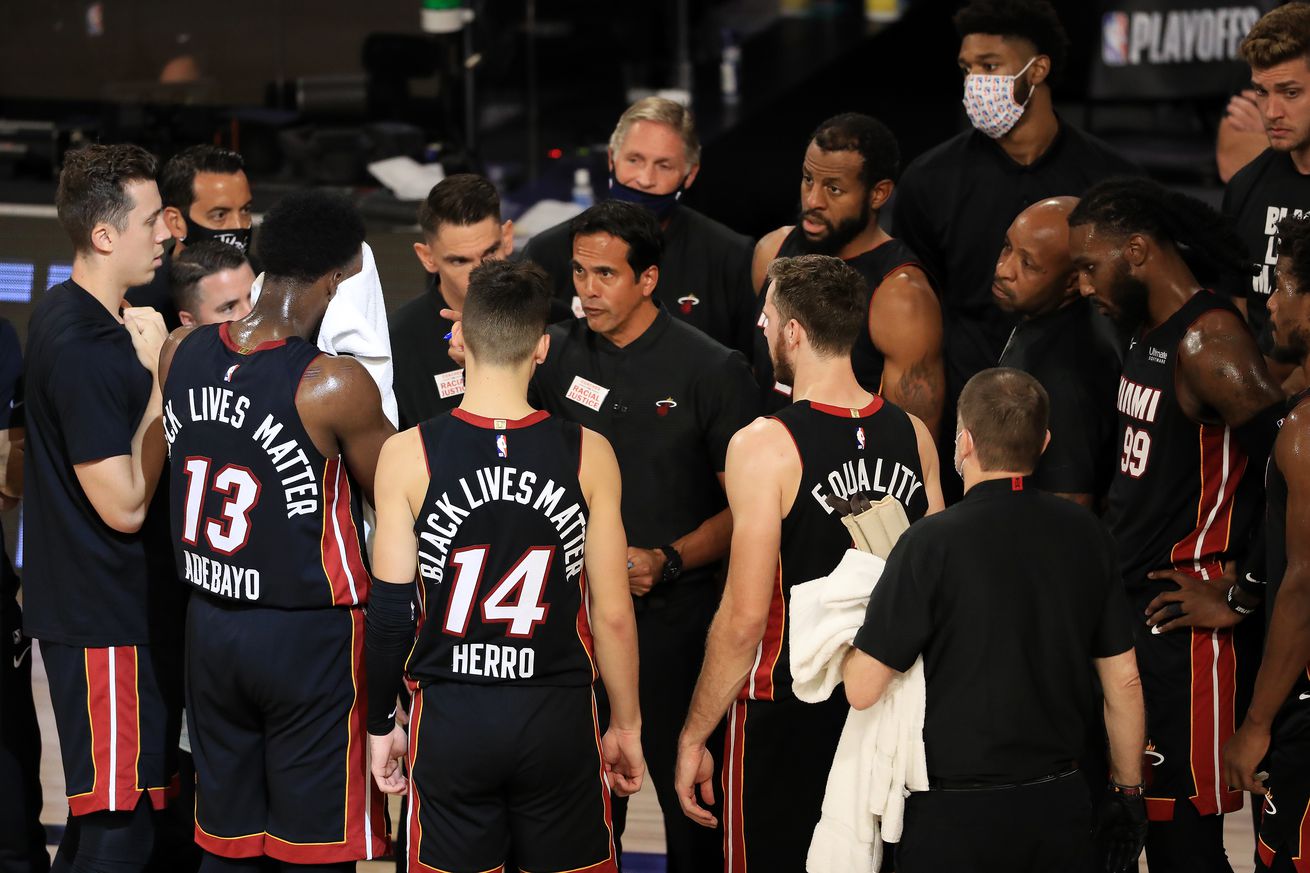 The Miami Heat are advancing to the Eastern Conference Finals. Here’s some take aways from their 5-game series with the Bucks.

The Miami Heat beat the Milwaukee Bucks in 5 games to advance to the Eastern Conference Finals. Here’s 5 take-aways from the series we think is becoming obvious.

#1 — The Heat’s motion offense is going to be a problem for anyone they play
Although Miami isn’t some offensive juggernaut every night, their motion offense is unlike most teams in the NBA. The Heat constantly found open looks from deep and they did through motion, penetration and kicking as well as the extra pass.

They like to primarily run though Bam Adebayo through the high post. And when they begin moving around without the ball, they make any defense have to work for everything. And when one person turns their head of loses their defensive assignment for a moment, someone is open. No matter who Miami plays, they are going to make that team work hard on defense. And it’s not because they are superior in talent, but rather that they play together.

#2 — Spoelstra’s ability to game-plan is elite
From the moment this series started, the Heat were locked in on their ability to limit Giannis Antentounmpo. Giannis had to work to beat them with his length and one of a kind ability to play north-south with few steps.

For Games 1 and 2, the Heat were able to really frustrate Giannis and it was clear that Spo’s ability to game-plan against opponenets is elite. In fact, it was Game 4 that they lost when Giannis left early and Khris Middleton went off that the Bucks won. And although Game 5 was close, a day of preparation for this new-look Bucks was all he needed.

Spo will have to work his magic again if Miami wants to beat the Boston Celtics (likely opponent) who have some players the Heat will have to figure out how to guard. to guard

#3 — Tyler Herro is a closer
He closed against Indiana, and he did the same against Milwaukee. In fact, he played most clutch minutes, with the exception of a few defense-offense substitutions. But here’s where it gets really interesting—I’m waiting for the Heat to put the ball in his hands intentionally when it counts.

He’s got it. At 20, maybe he won’t succeed, but he won’t back down. He took and hit some big shots already in this series, and Herro has infiltrated the starting group for closing minutes.

#4 — Jimmy Butler brings everything together for the Heat
You saw that with a 40-point Game 1. You saw that when he outscored the Bucks 17-13 in the 4th quarter of Game 3. And when Game 5 was within reach for the Bucks, Butler simply found his way to the foul line when necessary.

Jimmy doesn’t have to be the scorer every night, he knows that. But he is the one who has the ability to calm everyone down. And when nothing is working, he can go 1 on 1 and get to the paint. Miami plays well without him at times, but he is the one who brings everything together when it matters most. ters most

#5 — Bam still has room to grow
Although Bam has begun to have great numbers and has been really good for both these series, he still has considerable room to grow. Sure, the Heat moved him from a Power Forward to a Center inside the Bubble. All season, he started alongside Meyers Leonard, and now he anchors the defense as the lone big man.

But one area Bam has consistently struggled with is his ability to score over players with length and height on him. Myles Turner made it hard, and even Brook Lopez (also a 2nd team All-Defense alongside Bam), made it hard for him. Bam had a hard time scoring over the top of Lopez.

And Lopez sagged off Bam shrinking the floor — and although Bam would take some shots, it was mostly reluctant or situational. Once Bam makes defenders honor his 15-18 foot shot, he will be such a nightmare to defend. Then he will be able to use his quickness as a big to create an advantage against this length.

One thing to keep in mind — Daniel Theis will likely be his next matchup and Bam absolutely has to take advantage of him.

COMMENT BELOW: What do you think?
Do you have any other take-aways from this series that are things to consider moving forward?