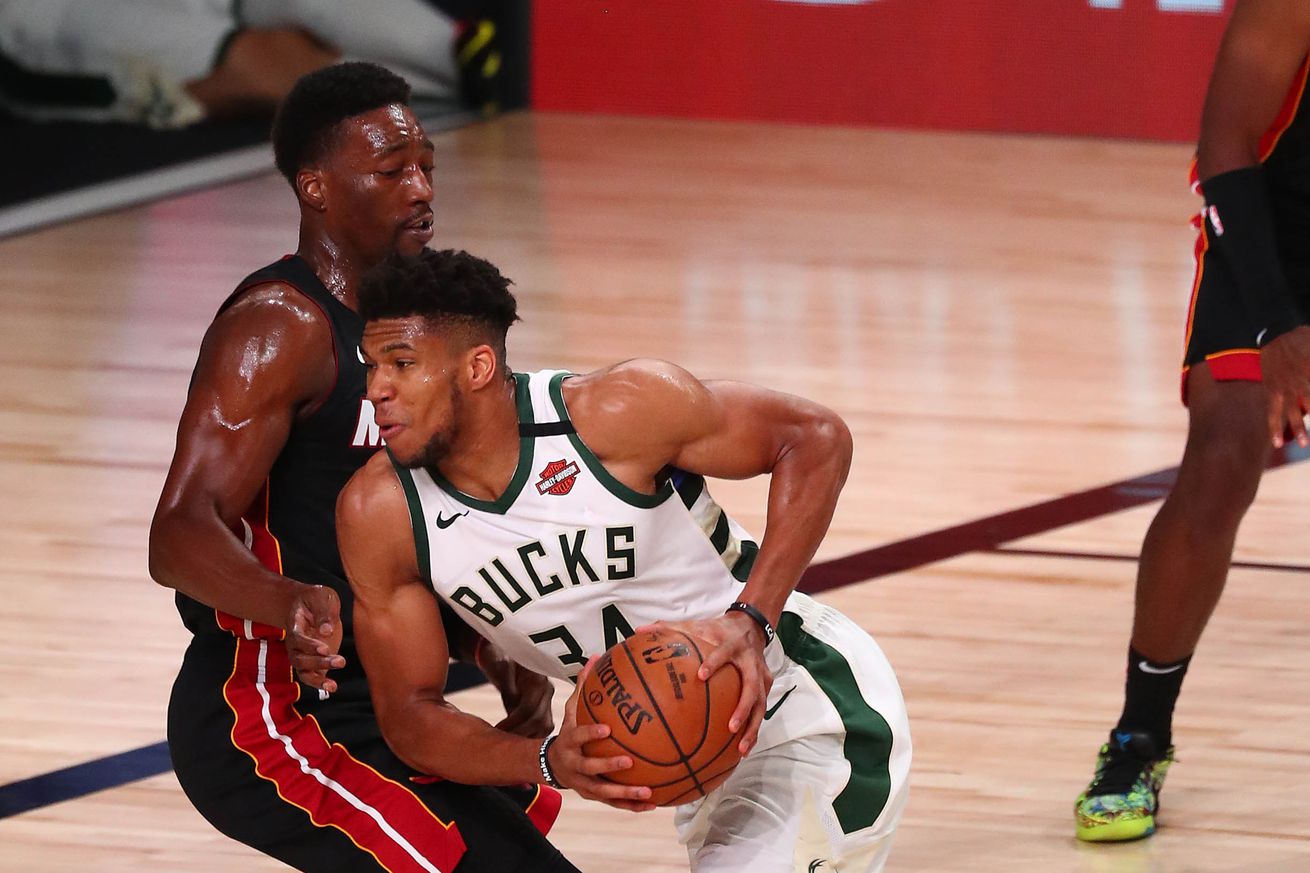 The Miami Heat will play the NBA-best Milwaukee Bucks in the Eastern Conference Semi-Finals. Here’s all you need to know.

The Miami Heat are ready to see what they are made of when they play the NBA-best Milwaukee Bucks. Led by 2019-20 NBA Defensive Player of the Year (and likely MVP), Giannis Antetokounmpo, the Bucks have the best record in the NBA.

Miami finished the sweep against the Indiana Pacers last Monday, while the Buck closed out the Orlando Magic on Saturday in 5 games. This series should be very competitive series. We want to talk you through it, so here is everything you need to know.

Key Matchup
I think we can all agree the most important matchup here is going to be Bam Adebayo against Giannis Antetokounmpo. There are ways to defend Giannis…the Raptors gave a glimpse of that last year by building a wall against him. The Heat will certainly try some different and similar things against the MVP, but there also needs to be someone who takes on the individual challenge.

That will be Bam Adebayo. Bam has the tools and the quickness to make Giannis work hard for what he gets. In the seeding game against the Bucks, Bam struggled to stay with Giannis. Although he was still working his way back, Giannis got to the rim easily against the Heat.

Putting pressure on Giannis defensively will be important as well. The biggest thing I am hoping to see is for Bam to do better on his series of fakes and takes against Giannis. He struggled at time to score over the length of Myles Turner. Giannis has length and is a better defender.

How the Heat dominate
The Heat will dominate this series in two ways. First, Jimmy Butler has to be able to penetrate the paint. He doesn’t have to consistently score in there, but he has to penetrate and collapse the defense. The Bucks are the best in the league at defending the rim. They have size and length and they collapse in the paint. So if Jimmy can get in there and collapse, he creates room for Duncan Robinson and Tyler Herro, Jae Crowder, Goran Dragic — and everyone else to have better looks from the perimeter. Of course, they have to make their shots, but the Heat have the tools to make the Bucks sweat.

The second way the Heat can dominate this series is by not allowing Kris Middleton to get rolling. Middleton is a quiet All-Star. Giannis Antetokounmpo is going to score and rebound and make an impact defensively. No matter what you do, he is too good to make him a non-factor. Middleton is different. He can shoot and score. And if the Heat, specifically Jimmy Butler, are able to make life miserable for him, the Bucks are so much more vulnerable.

How the Bucks dominate
The Bucks will dominate the Heat if Miami doesn’t ever counter with size. Milwaukee will play big at times with both Giannis and the Lopez brothers. The Heat tend to play small. There’s a limit to the effectiveness of Kelly Olynyk as your main big off the bench. Will Derrick Jones Jr. be able to utilize his length to be a factor? I think there is going to have to be room for Meyers Leonard to have a role in this series. If the Heat refuse to counter with height then the Bucks can dominate.

The X-Factor
Tyler Herro will be the X-Factor for this series. He played so well against the Indiana Pacers averaging over 16 PPG in those four games. But he will have a better defense covering him this series. He’s deeper in the playoffs. If he can perform, then the Heat have a lethal weapon off the bench that the Bucks don’t really have.

But if he shrinks, the offensive output for Miami will take a hit. Herro and how he plays in the second unit, and even the crunch time will have a significant impact on how well the Heat do in this series.

*ESPN Panel picks: They split their decision with 8 of the 15 experts picking the Bucks over the Heat.

We hope you have enjoyed reading this preview of the Heat and Bucks series. Stay tuned with us for all the previews and recaps of each game.