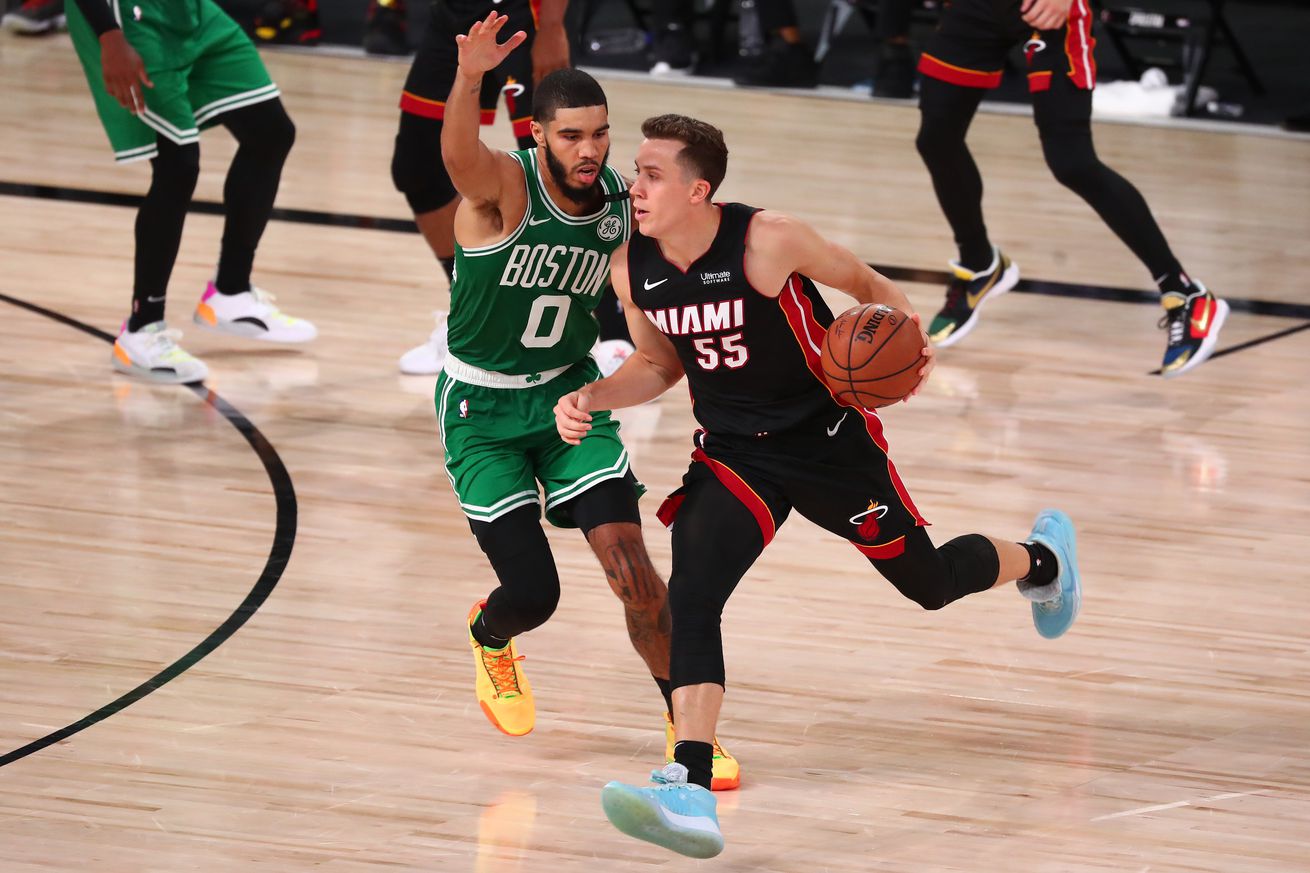 Despite a strong fourth quarter push, the Heat couldn’t close the gap and would drop game 3 to the Boston Celtics.

The Celtics were first on the board with Marcus Smart getting to the line, but Bam returned fire right away. Boston was ridiculous from the field again (66%) with Jaylen Brown and others hitting contested looks.

The Heat struggled to guard the paint with many of the Celtics’ points coming from inside (they shot 47% on rim shots in the first half), Boston was also a lot better in keeping control of the ball only turning the ball over 1 time in the first quarter.

Despite Boston’s solid shooting percentage, the Heat would go into the second quarter only down 9.

Tyler Herro got the offense going for the Heat in the second quarter, hitting a two and three on back-to-back possessions. DJJ also got involved with a three of his own. On the other end Boston continued to feast in the key and even got it going from beyond the arc.

On offense it really was Herro keeping Miami within striking distance as he hit two back to back threes. It’s so hard to believe he’s a rookie. Those threes (and a tech on Tatum) sparked a 7-0 run for the Heat. That however wouldn’t last with the Heat putting together some sloppy possessions and Boston gaining an edge on the other end.

Besides Herro, and Bam Miami’s offense was stagnant with Jimmy struggling to draw fouls and the Heat just making bad passes. They managed to pick things up towards the end of the quarter and close the gap slightly with Jimmy getting on the board.

The Celtics would score on three straight breakaways to go up by 10 and completely nullify Miami’s effort. The Heat completely imploded to end the half. Not something we’re used to seeing from this Heat team.

Jimmy was more aggressive to start this half, driving to the rim and getting absolutely no calls from the ref. On the other end, Jaylen Brown and others got to the rim with ease as Miami seemed distracted by the amount of fouls being called on them.

The Celtics wouldn’t slow down with Williams, Tatums and others continuing to run up the score (they’d go up 18).

Bam did his absolute best to will Miami back into the ball game, he was the only source of Heat offense. Spo changed the rotation to go small towards the end of the quarter, bringing in Kendrick Nunn and Derrick Jones Jr. This would get the Heat going as they went on a 11-1, with Dragic putting numbers on the board and Herro doing the same.

The Heat would again nullify their efforts slightly with some sloppy possessions, and poor decisions as Nunn turned an easy dunk into a three point play for Tatum.

The Heat were down 15 headed into the fourth.

Gordon Hayward hit a three to start the fourth getting the Celtics back up 18. Bam would return fire, but a Kemba three shortly after would extend the lead again.

It seemed as if it was the Boston Celtics vs Bam Adebayo at times.

The Heat had no answers on offense besides Bam, attempting to force feed their shooters. They’d miss 15 straight. Jimmy attempted to get things going, forcing himself to the rim and finally drawing fouls. Around the 4 minute mark the Heat would finally get things going a bit, cutting the lead to 8 thanks to some great play by Duncan Robinson and Jae Crowder.

Duncan would also play some great defense drawing a flagrant foul off Jaylen Brown to get to the line and get the ball back. He’d miss one, but Bame would score right away to make it a five point game. Unfortunately Marcus Smart would get to the line multiple times and missed Heat threes would end this one just short of a Heat comeback.

Too many sloppy mistakes, poor paint defense and a severe lack of offense would cost the Heat this game.