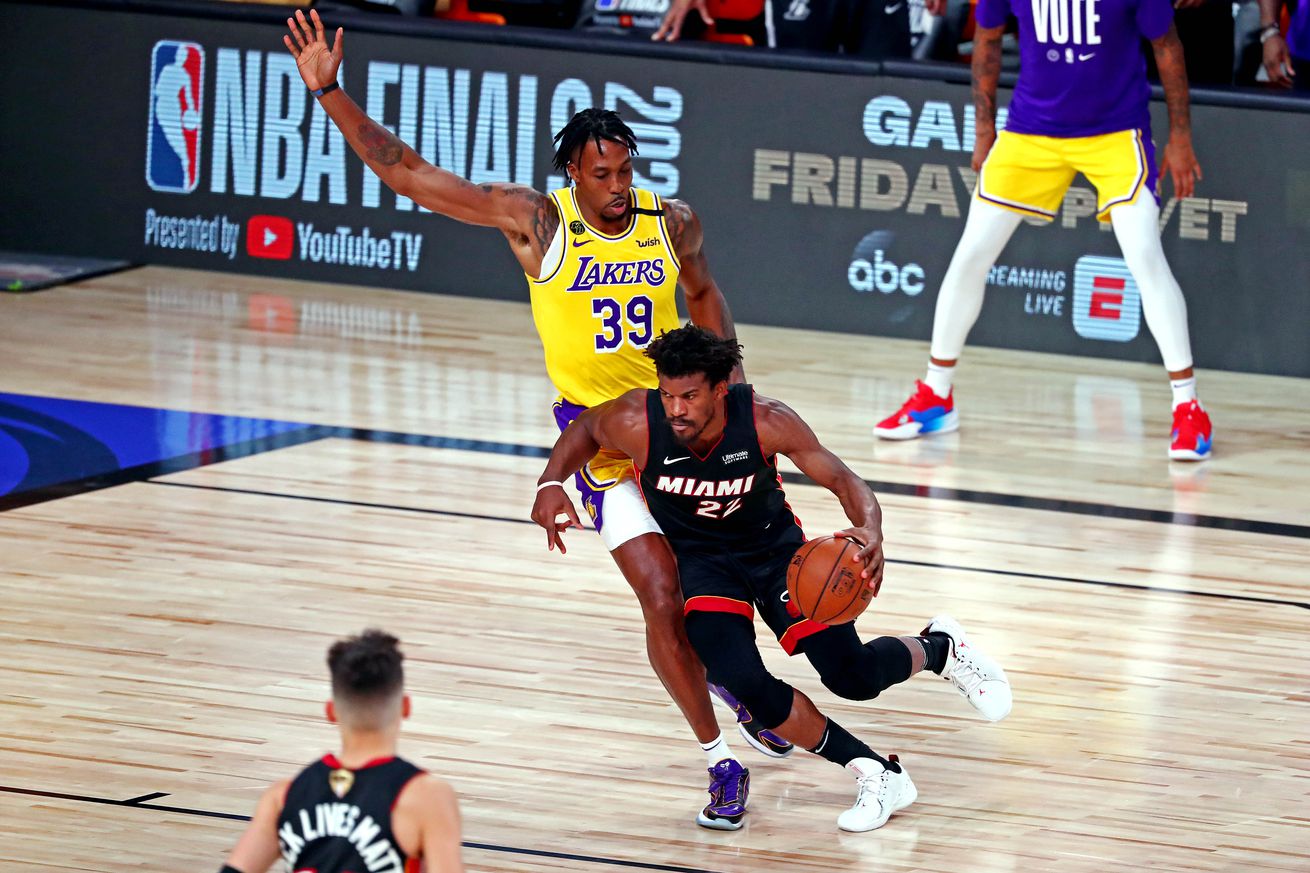 Despite a strong start the Heat would struggle defensively, and lose Bam Adebayo and Goran Dragic to injury as they fell apart in Game 1.

The Heat were hot to start with Jae Crowder hitting the first three of the Finals which was huge considering his slump in the ECF (he’d continue to hit his shots throughout the quarter). Jimmy Butler hit a three on the next offensive possession, and would follow that up again with a two.

Jimmy was aggressive to start he was 4-4 to start. As was Bam Adebayo who utilized his speed to get to the rim and score at will. The Heat were also really good at grabbing their own rebounds for second chance points. This allowed the Heat to take a 13 point lead.

On defense the Heat did an acceptable job on LeBron and AD who really were the only Lakers producing offense. Towards the end of the quarter Caldwell-Pope would explode to get the Lakers within striking distance.

The Heat got a bit sloppy towards the end of the quarter committing bad turnovers that would allow the Lakers to tie the ball game, and eventually take the lead. Spo inserted reserves who haven;

Despite a strong start the Heat surrendered a 13 point lead very quickly.

Goran Dragic got things started for the Heat on a go ahead layup to start the 2nd.

Jimmy continued his hot start, shooting very well from the mid-range and Tyler Herro would also get going. The rookie did not flinch, as he guarded LeBron for periods and hit threes like they were nothing. No lights seem too bright for Herro on offense.

On the other end it was Rondo doing work from three (yes, you read that right. He has somehow shot 48% from beyond the arc in the bubble) that would cause the Heat issues. Additionally Bron would continue his exceptional play making to get Caruso and Green going. This would spark an 8-0 run for LA. Markieff Morris would also cause a lot of issues for Miami extending that run. The Lakers’ shooting was crazy efficient (they shot 56% from the field) not unlike the Celtics at times last series.

Jimmy would sprain his ankle, but finish the half.

With Miami struggling to score the Lakers would continue to run up their lead and take a 17 point lead into halftime.

Jimmy Butler would get things started with a basket and an and one to start the third quarter, but things quickly shifted back into the Lakers’ favour. The Lakers would continue their hot shooting and build on their lead with Anthony Davis ravaging the paint for easy buckets and rag-dolling Heat defenders. At times, the Heat just looked too small.

An early announcement would reveal that Dragic injured his left foot and would be doubtful to return (he didn’t come back). A monumental loss for the Heat.

The Heat’s offense was stagnant with nobody being able to take over. Herro was double teamed, Bam slowed down and without Goran Dragic around to be the conductor things fell apart. They’d score only 17 points in the quarter, the lowest of the game at that point.

Bam injured his hand and had to exit the game, just to add on an already horrible injury night. It’s never a good sign when your three best scorers get injured in the same game.

On defense the Heat were no better, giving up 26 points.

Kendrick Nunn did his absolute best to create offense for the Heat creating an 8-0 run out of nowhere. He finally looked like he was back in rhythm scoring 18 points and grabbing 5 rebounds after a very long slump. He even had a few highlight reel plays.

Despite the little push, the Lakers weren’t done with LeBron James continuing to do damage in spectacular fashion.

The Heat reserves would dig in and fight with Solomon Hill, and Herro getting on the board and attempting to trim the lead, but it was too little too late.

This was not how the Heat, or Heat fans saw this one going. A truly terrible loss. Some might say “Well, at least it can’t get any worse.” but depending on the Goran and Bam news, it definitely can. Game 2 is on Friday.