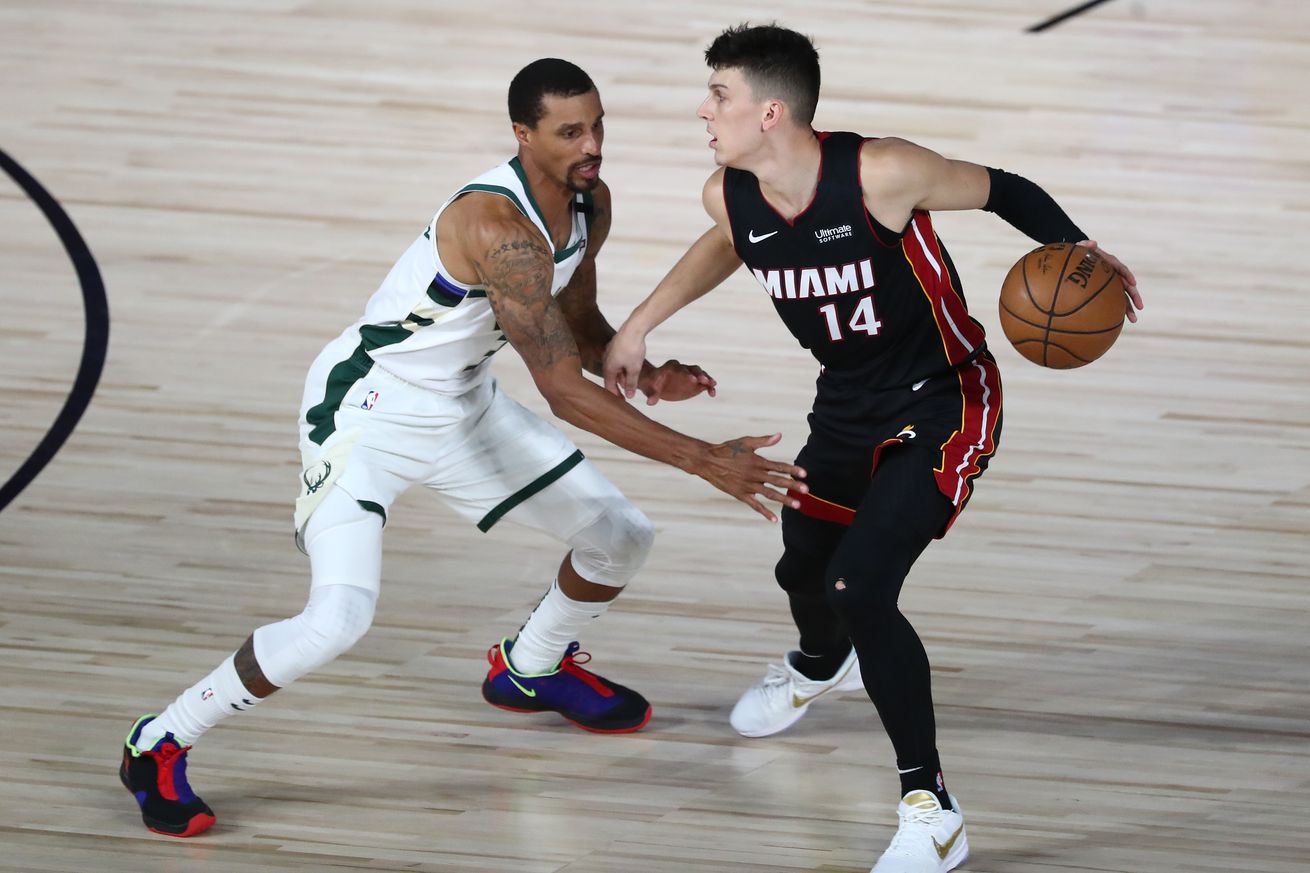 Despite multiple strong pushes from the Bucks, Miami would outlast Milwaukee to head to the Eastern Conference Finals for the first time since 2014.

Jae Crowder got things started off for Miami with a bank shot three, but Milwaukee battled back early to take the lead with Dante DiVincenzo hot to start. The Heat looked incredibly sloppy, turning the ball over often and making too many passes. Jimmy alone had four turnovers.

Miami’s defense was also porous as Bledsoe, and Wesley Matthews easily got in the key for buckets.

On offense the Heat just couldn’t get anything going as they shot 37% from the field and forced a lot of looks. As Miami faltered, Middleton, Korver and others feasted.

Still even despite the poor shooting Miami wasn’t out of things. They’d go into the second quarter down only nine.

Dragic worked to correct the course with a big three, Herro would follow him up with one of his own. Even Kendrick Nunn got involved to get the heat within three. The Heat would go on an 11-2 run.

The Heat reserves were also exceptional on defense providing a ton of pressure on the Bucks’ shooters. Andre Iguodala was particularly impressive on Middleton.

Kendrick Nunn showed flashes of why he finished 2nd in ROY voting, keeping the Heat offense going long enough for Jimmy to help the Heat take the lead. The Heat really got rolling outscoring Milwaukee 26-9.

The Bucks would come back thanks to Wesley Matthews and Brook Lopez, but some great buckets from Jimmy, Bam and Dragic would keep them just out of reach. Miami took a six point lead into halftime.

Crowder again would hit a three to kick off Miami’s offense. On the other end DiVincenzo remained a thorn in Miami’s side, absolutely lighting things up from beyond the arc. On defense Divincenzo was also a menace as he pressured Duncan Robinson constantly. He’d pick up his third foul, but stay in and continue to wreak havoc.

Miami’s offense was once again stagnant, allowing the Bucks to sneak back within one. With the Bucks pressuring the Heat made a lot of sloppy passes and unnecessary errors.

Bam and Jimmy looked panicked, afraid to drive and overpassing. It was very strange. With so many blown possessions, it’s almost surprising that the Heat maintained the lead. Thankfully, Miami’s reserves once again picked up the slack with Olynyk and Dragic coming in to pick things up.

Olynyk was impressive, going into his bag of tricks and stepping on the breaks often as defenders flew by like something out of Top Gun. The Heat defense was also strong holding the Bucks offense scoreless for nearly 6 minutes.

The Bucks broke that drought to go on an 8-0 run to get within five. Tyler Herro hit a big three to put the Heat up eight heading into the fourth quarter.

Brook Lopez started the fourth quarter with a slam, but Kelly Olynyk would return fire on the other end.

The Heat defense was good, but they were once again stagnant on offense, scoring periodically, but making way too many turnovers. Tyler Herro got the Heat back in rhythm with some beautiful passes and fearless plays. It’s incredible to see Herro step up the way he has in this series.

Middleton once again stepped up for the Bucks getting them within four, but Jimmy would draw a big foul at the other end to slow the pace. It seemed as if every time Jimmy got the ball on offense, he’d draw a foul with the Bucks hip checking him hockey-style.

On the other end Lopez did his best to keep the Bucks around, getting to the line himself. He’d go 1 for 2.

Dragic hit a huge shot to put the Heat up seven with just over a minute left, but a Herro foul put things in doubt. Luckily, the Bucks weren’t able to convert so Jimmy would draw more fouls on the other end and deliver at the free throw line.

Officiating was all over the place to end the game, with Andre fouling DiVincenzo on a three with 12.7 seconds to go. With 2.2 seconds to go Bam Adebayo would hit two free throws to send the Heat to their first Eastern Conference Finals appearance since 2014.

It wasn’t pretty, but they got it done.