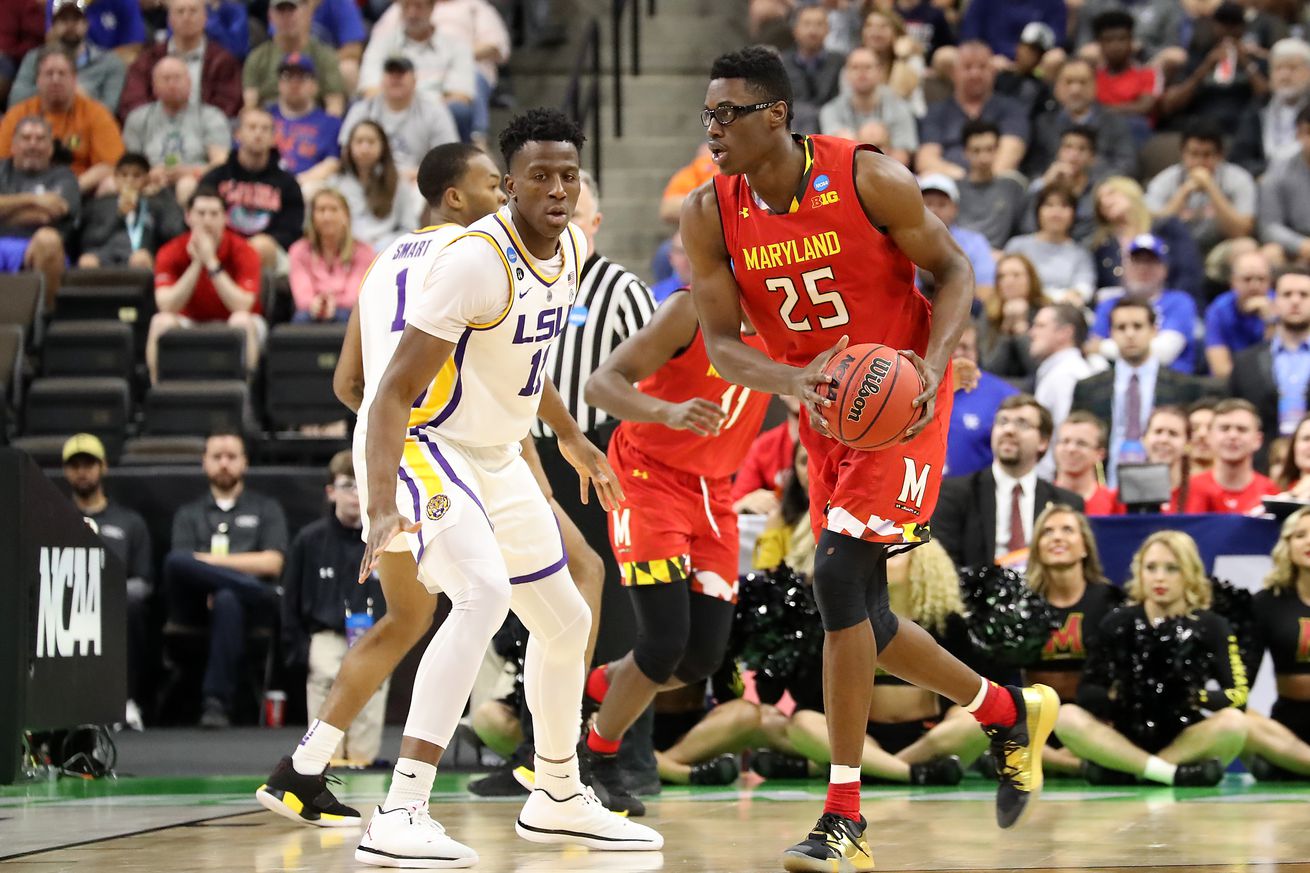 Hot Hot Hoops participated in the SB Nation site-wide NBA Mock Draft this past week and had the Miami Heat select Jalen Smith from Maryland with their 20th pick.

When the Miami Heat got on the clock, it was down to a few choices, Jalen Smith, Jaden McDaniels or Desmond Bane. With the Heat invested in shooters like Tyler Herro and Duncan Robinson…it became clear that maybe selecting a fit would be the best option.

Jalen Smith is not the most awe-inspiring prospect. But he has a solid skill set that would fit in with what the Heat are doing right now. He is a stretch big who can hit threes and he can also rebound well, especially on the offensive glass.

Where he struggled is defensive rotation and switches as well as decision making. Fortunately, if the Heat were to select Smith, he would probably be filling some type of role left behind by Meyers Leonard if he doesn’t return.

Most draft boards have Jalen Smith coming off the board in the teens between 15-19. Some board have him going later in the first round.

At Maryland, he averaged 15.5 PPG and 10.5 RPG in his sophomore season. He also shot nearly 37% from deep and connected on 75% of his free throws — which goes to show you he has a touch to his shot.

Could Jalen Smith be a complimentary piece either next to or perhaps behind Bam Adebayo. Miami really lacked the size of front in the NBA Finals and maybe the 6’10” center with a 7’2” wingspan could help with that.

Here’s a Draft Profile from NBADraft.net for Jalen Smith.

Strengths: A long, versatile power forward with solid all around skill set … Possesses a 7’2 wingspan and 6’10 height … Shows the ability to contribute in a variety of ways, and on both ends of the floor … Showed intriguing development from his freshman to sophomore seasons … Has developed into a quality outside shooter, showing the range to knock down the three ball at a solid clip, making one per game at 36.8% … Also improved as a FT shooter, raising his average from 65 to 75% in his sophomore year … His ability to shoot on top of the length and athleticism makes him an intriguing option in today’s shot-centric league … A quality defender … Shows a solid ability to block shots utilizing long arms, leaping ability and excellent instincts to read and react opponents around the paint … Smith is a cerebral player, and shows good decision making ability … Productive college player, who played with consistency and energy … Has very good size and length at 6’10 with a 7’1.5 wingspan … Runs the floor hard, and does a solid job of finishing on the break … Shows some solid post skills with the ability to hit baby hooks as well as create baskets with polished interior moves … Considered a great kid, very hard working and intelligent …

Weaknesses: While he is bouncy, he is not the most fluid of athletes … Hips appear stiff and doesn’t show great flexibility … His post moves can look somewhat robotic at times … Worked hard in the off-season to add strength and bulk, but his legs still appear very thin, and somewhat underdeveloped … Whether his lack of leg mass / body symmetry creates an injury concern is something that team doctors would need to address … Jump shot is effective but takes a little while to get off. Can improve upon making his shot more concise and have less range of motion over time … May take some time to extend his shot to become an effective NBA three point shooter but the hope is obviously … Lacks great ball handling ability to create offense for himself off the dribble … Movements appear stiff and robotic at times, doesn’t always make things look sexy, but he’s obviously very effective in his role …

Overall: Despite being just 225 lbs, today’s game seems to have gone away from strength with spacing and skill being of more importance in big men … Smith is considered by most scouts as a likely first rounder … Was able to add 15 lbs of muscle to his frame showing better ability to handle contact in the post in his sophomore season …

Notes: Nicknamed “stix” due to his svelte frame, particularly during high school … Came into college as the 16th rated recruit by 247sports and 10th overall by ESPN … Some considered him a likely one and done lottery pick entering Maryland … And he was arguably one of the top freshman to return to college for his sophomore season …