The Heat will re-sign third-year free agent swingman Max Strus on a two-year contract worth $3.5MM, his agent Mark Bartelstein informs Adrian Wojnarowski of ESPN (via Twitter). This sum is in line with the amount of a veteran’s minimum deal for Strus. 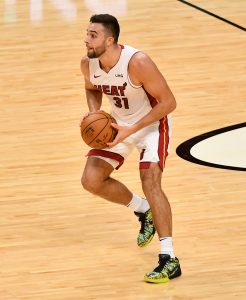 After going undrafted in 2019 out of DePaul, the Hickory Hills, Illinois native joined his home state Bulls on a two-way contract for the 2019/20 season. Strus suited up for 13 games with Chicago’s NBAGL affiliate, the Windy City Bulls, and had a two-game cameo with Chicago, before suffering a season-ending left ACL tear.

Strus then inked a non-guaranteed Exhibit 10 camp deal with the Heat ahead of the 2020/21 season, and later was brought on as a two-way player for the rest of the year. The Heat extended a $50K qualifying offer to the 6’5″ wing this summer, making him a restricted free agent under team control.