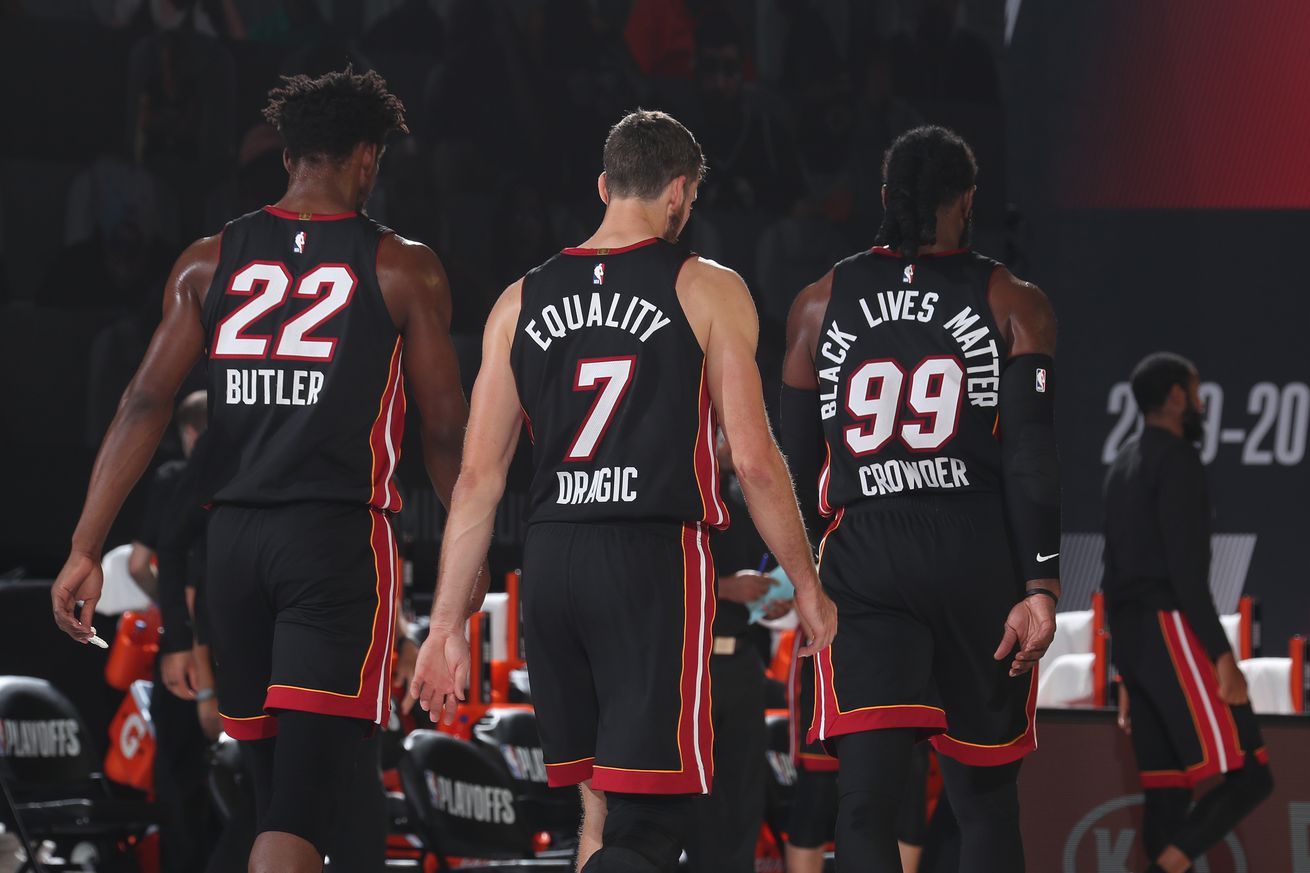 Right after the Miami Heat finished the 2018-19 season without a playoff berth, Pat Riley said, “Whether you believe me or not, I think we’re right at the launching pad right now.” He dismissed the idea of tanking and added, “There are no obstacles” — a strange comment considering the Heat had Hassan Whiteside, Dion Waiters and James Johnson under contract.

Riley: Don’t make any conclusions about next year that we’re stuck and there are certain contracts we can’t get out of. That would be foolish.

Fast forward a year-and-a-half, and the Miami Heat are in the conference finals — a place the Philadelphia 76ers haven’t reached since 2001. How did Riley pull it off?

No one could’ve predicted how much value the Heat would get from these two undrafted players. Duncan Robinson finished the season with the third-highest on/off net rating — just behind Chris Paul and Giannis Antetokounmpo and ahead of Kawhi Leonard, Jayson Tatum and LeBron James.

He broke the Heat’s single-season 3-point record back in March, before the NBA season shut down. The Bam Adebayo/Robinson dribble hand-off became the stuff of legend; the Heat scored 114.8 points per 100 possessions when the two shared the court.

And although Kendrick Nunn has gone from a starter to a borderline rotation player in the playoffs, his play allowed the Heat to conserve Goran Dragic’s minutes as a sixth man during the regular season. And Nunn showed in Game 5 against the Milwaukee Bucks that he can still offer some offense. In any case, having him and Tyler Herro as Miami’s young guards on cheap contracts is much better than overpaying Dion Waiters and Tyler Johnson.

For these choices, a lot of credit should go to Adam Simon, who is the VP of Basketball Operations and Assistant General Manager, and Chet Kammerer, a longtime scout and current Senior Adviser. They spend the long hours figuring out who the Heat can pick off the scrap heap.

In a 2018 pre-draft workout, Kammerer saw Robinson put together a superb shooting performance. He then called Heat General Manager Andy Elisburg and told him to sign Robinson. That story has now become Heat lore.

Good stuff from Brian Windhorst on how the Heat “discovered” Duncan Robinson.

Speaking of Herro, that’s a draft pick that garnered a lot of criticism. (Many also questioned the Heat’s pick of Adebayo in 2017.) But the 20-year-old rookie has grown up in front of our eyes in the NBA Bubble. Herro has made clutch plays in both playoff series, including Tuesday night’s closeout game against the top-seeded Bucks.

Tyler Herro’s teammates have been telling you all season long about him.

Now on this postseason stage @raf_tyler is giving the world no choice but to believe everything everyone has said. https://t.co/Wl09ktfUv2

And the Heat deserve credit for picking Herro. Some wondered whether he’d have the length to play well in the NBA, but Miami loved his work ethic and offensive skills. At the time of the NBA Draft, many thought that both Adebayo and Herro were reaches. Now, they are looked as steals.

In the evening of June 30, 2019, ESPN’s Adrian Wojnarowski reported that the Miami Heat were finalizing a sign-and-trade for Jimmy Butler. Josh Richardson would go to the Sixers, but the Heat needed to send out more players to make the incoming and outgoing salaries match.

The deal will include Josh Richardson to the 76ers, league sources tell ESPN. https://t.co/nWFrg00mtm

At first, Miami tried to trade Goran Dragic to the Dallas Mavericks as part of the sign-and-trade, but Dallas wanted the younger Derrick Jones Jr. The Heat weren’t willing to trade Jones, so Riley needed to find another trade partner. The next day, he agreed to trade Hassan Whiteside to the Portland Trail-Blazers, keeping both Dragic and Jones.

In his role as general manager, Elisburg knows the NBA salary cap better than anyone. He helped Miami pull off their 2010 free agency coup and again found a way to land Butler with no cap space.

It’s difficult to overstate how crucial (and lucky) this sign-and-trade trade turned out for Miami. Butler and Dragic have formed a close friendship. According to FiveThirtyEight’s RAPTOR metric, Dragic has been the Heat’s best player in the playoffs. And trading Whiteside gave Adebayo the room to grow into an All-Star and All-Defensive player.

The Miami Heat surprised many people early in the season, but they still had some struggles on the defensive end of the floor. Aside from Butler and Adebayo, the Heat had no two-way players. Miami’s perimeter players — Dragic, Herro, Nunn, Robinson — were getting exploited defensively. Justise Winslow was injured. The Heat used more zone defense than any other team to cover up their flaws.

Then on the trade deadline, Riley traded Winslow, James Johnson and Dion Waiters for Andre Iguodala, Jae Crowder and Solomon Hill. The move turned three players who were out of the rotation for two players who could contribute immediately.

Crowder has been better than anyone expected, morphing into a knock-down 3-point shooter and offering tough defense on anyone from Victor Oladipo to Giannis Antetokounmpo. And though Iguodala took some time to round into shape offensively, he’s become a key part of the Heat in this playoff run. The trade undoubtedly improved the Heat’s defensive problems.

Pretty cool how that all worked out, huh?