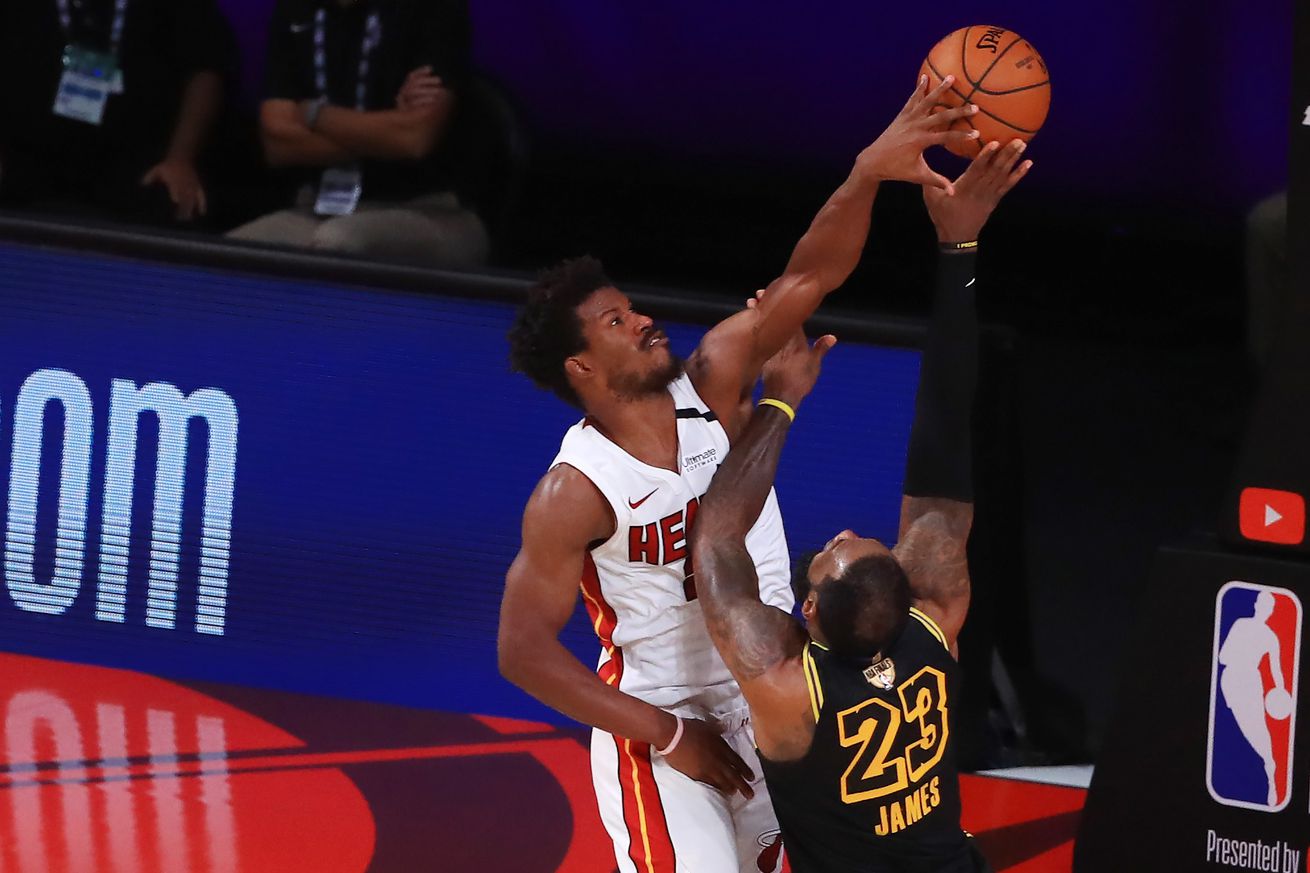 Butler finished with 35 points, 12 rebounds and 11 assists to to force Game 6 on Sunday.

In a tight fourth quarter, Jimmy Butler made a pull-up jumper with 1:51 left to put Miami up 103-101. But LeBron James came down the other end and made an and-one layup, giving the Los Angeles Lakers the lead back. Butler answered with a turnaround fadeaway. On the other end, James grabbed his own rebound and made a put-back layup to pull LA up 106-105.

It was an epic duel that had all the makings of an instant classic. And there was still more to go.

Butler made four free throws in the final minute of the game, and the Heat held a 109-108 lead with 16.8 seconds left. Frank Vogel called his final timeout. On the Lakers’ ensuing possession, James kicked the ball out to an open Danny Green. He missed, and Markieff Morris threw the ball out-of-bounds on an attempted entry pass to Anthony Davis.

Tyler Herro made two free throws on the other end, and James missed a desperation heave at the buzzer. The Miami Heat’s season lived on.

Butler played all but 48 seconds in Miami’s first elimination game of the season. And he had an amazing game, scoring 35 points on 11-of-19 shooting from the field and a perfect 12-for-12 from the foul line. Butler also grabbed 12 rebounds and dished out 11 assists, marking his second triple-double of the NBA Finals. And the Heat’s max player had five steals. It was another herculean performance.

James, for his part, went for 40 points on 6-of-9 shooting from beyond the arc, 13 rebounds and seven assists.

Miami needed their 3-point shooting to come through to force a Game 6, and Duncan Robinson was huge. Robinson was 7-of-13 from beyond the arc to finish with 26 points. One of his 3s came with 3:16 remaining in the game and put the Heat up 101-99.

Duncan Robinson with a BIG TIME 3

The former Division III player also drew an offensive foul on James in the fourth quarter. Vogel challenged the call, but it was unsuccessful. And Robinson had a put-back. Stuff you didn’t expect to see happen in a potential championship-clinching game.

Laying it all on the line pic.twitter.com/ncJ1RaLXs4

Unfortunately for the Heat, Bam Adebayo did not look better Friday night than he did in Game 3. Adebayo missed several shots at the rim that he usually makes, including a blown dunk early in the fourth quarter. He finished with 13 points on 5-of-12 shooting from the field. Hopefully he can return to his Eastern Conference Final-level play in Game 6.

With his season on the line, Erik Spoelstra opted to go just seven deep, using Kendrick Nunn and Andre Iguodala off the bench. Nunn had his scoring moments in the first half and finished with 14 points on 6-of-11 shooting and three assists. And though he didn’t score, Iguodala made several key defensive plays.

Andre Iguodala’s hands are lightning quick on defense. What a play here to swat the ball away from Kyle Kuzma, then deliver the ball to Tyler Herro for the 3. So good pic.twitter.com/fpCxIAdFFP