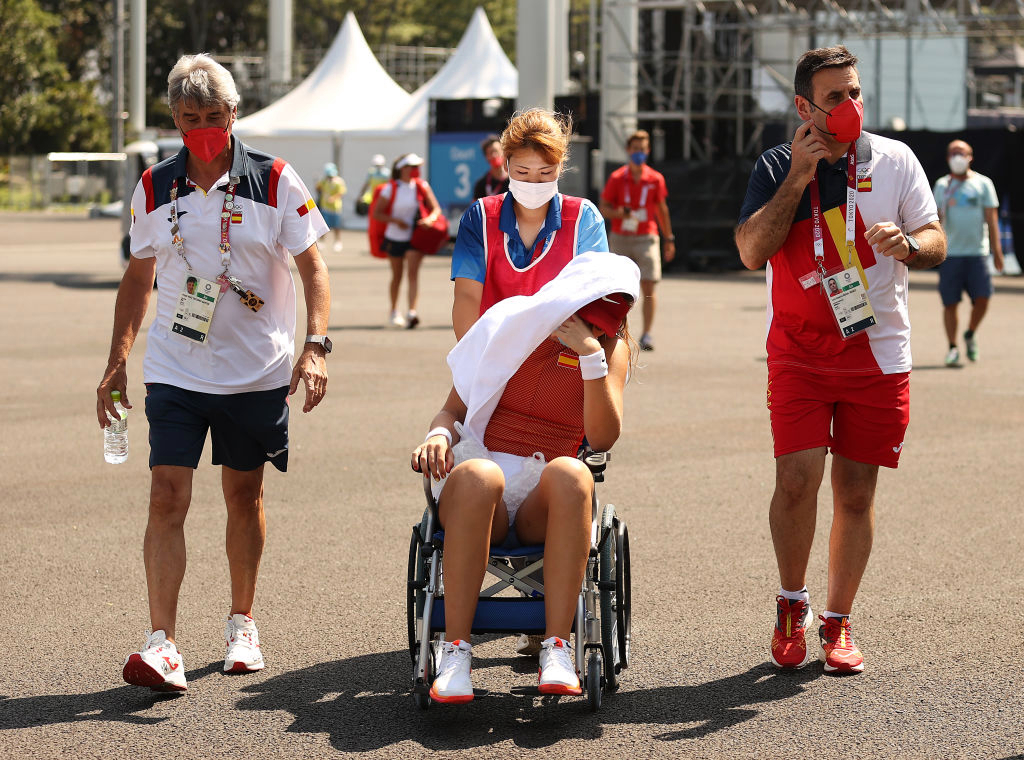 Badosa left the field in a wheelchair. (Photo by David Ramos / Getty Images)

Spain’s tennis player Paula Badosa was forced to withdraw from the Olympic women’s singles quarterfinals against Czech Marquette Vondrosova on Wednesday due to Westrock.

Before the start of the second set, Badosa lost the first set 6-3 before requiring medical time on Court 4.

After a long focus, the Spaniards were unable to proceed and before leaving the court in a wheelchair, he announced his withdrawal from the match.

In a comment posted on the Tokyo 2020 site, Badosa said, “As you all have seen I have suffered a heat stroke and I do not feel qualified to continue competing in the tournament.”

“With the pressure of competition, how special these days are, these are the things that happen in the game, and today I had to cross that landscape.

“It is a shame to end my participation in this way. From the first day conditions demanded, we tried to make it as good as possible, but today the physical work is not opposed to the need,” Badosa added.

Marquette Vondrosova, who previously defeated Naomi Osaka, advanced to the women’s semifinals, where she will face Ukraine’s Elena Svitolina.

The Spaniards were due to face the Polish pair Iga Sviatek and Lucas Kubot in the first round on Wednesday.

In the draw, Padosa and Kareno Pusta were replaced by Frenchman Fiona Ferro and Pierre-Hughes Herbert, who lost 6-3, 7-6 to the Polish duo.

“I leave with a sense of pride for having provided everything for my country, for representing it as professionally as I could,” Badosa said.

“I’m going to focus on healing, work to be good, give myself. The chance to return to an event like this,” he added.

He retired following public criticism of the Tokyo 2020 tournament schedule by both Novak Djokovic and Daniel Medvedev.

Both players said it would be best to start the match in the evening as conditions have calmed down.

In his singles match against Fabio Fognini, Medvedev told the referee: “I am a fighter, I will finish the match, but I can die. If I die, will the IDF be responsible?”