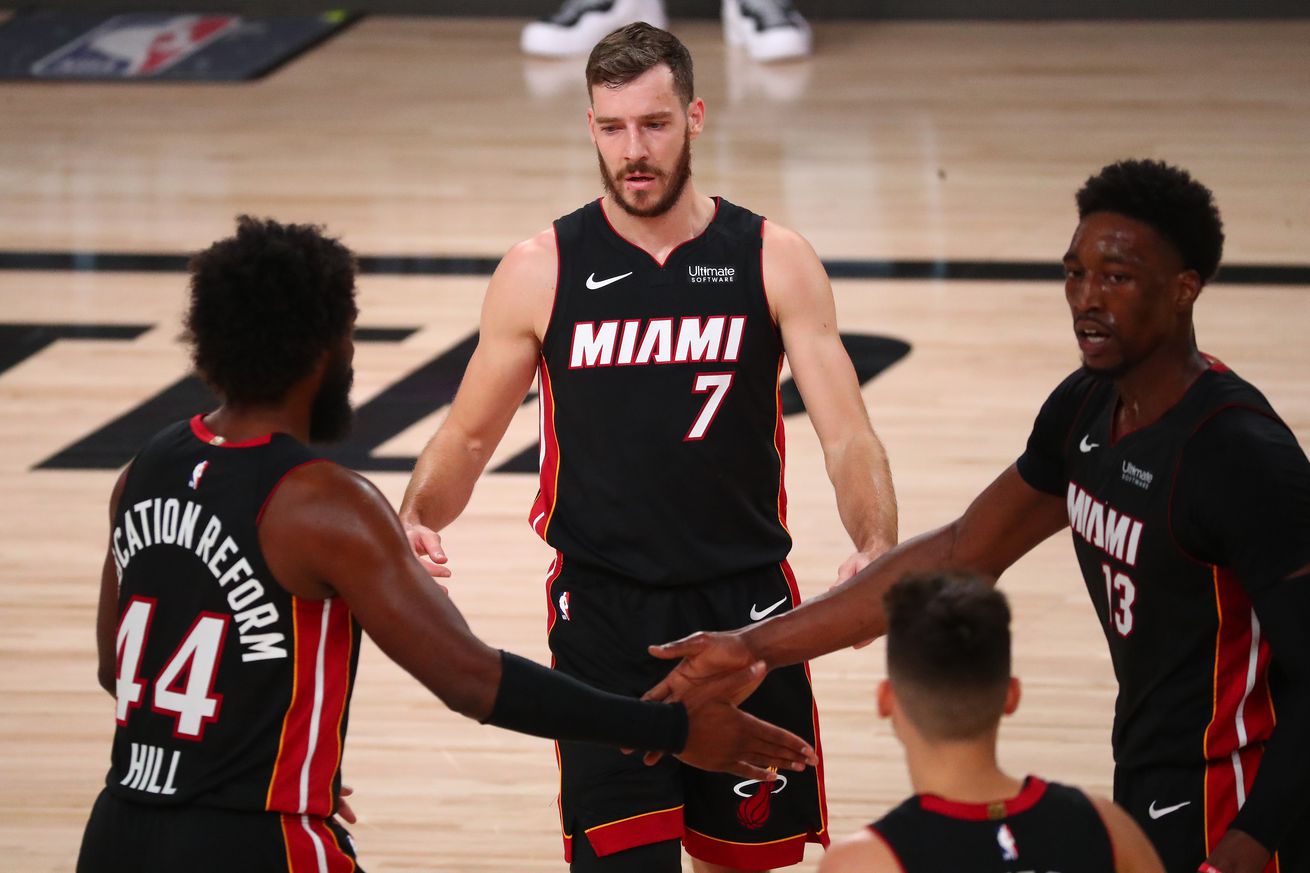 The Heat have multiple specialists in more ways than one.

The Miami Heat have the best record in the 2020 NBA Playoffs thus far. Let that fact sink in. Now can Erik Spoelstra reach into his bag of tricks and pull out another surprise to stop a desperate Boston Celtics team on the brink of elimination?

“His [Hill] ability to switch and keep his man in front of him on dribble penetration gives the defense a dynamic that it lacks with Allen and Turner…Hill gives the Pacers more defensive options to cover that action than Allen or Turner, mainly the ability to switch onto the ball handler.”

As a setup to those sentences the author had this to say earlier on.

“It is interesting that Frank Vogel seemingly discovered this successful lineup by accident. After the All-Star break, as Myles Turner became seen as a threat to opposing defenses, opponents increasingly employed a spread look to neutralize — and at times overwhelm — the Pacers’ big lineups. Turner often looked lost, unable to come out of the paint to chase smaller players and fouling a lot even when he was able to stick with his man.”

“It’s unclear if Hill can guard real power forwards. Light-in-the-butt stretch guys and backups? He’s got those down, and he can switch easily between them and almost any wing player. He toggled from Patrick Patterson to DeMar DeRozan in the first round, and guarded everyone from Draymond Green to Russell Westbrook in the regular season. He’s solid against perimeter players, strong and generally in tune both on and off the ball.”

“There hasn’t been a marquee 20-point performance or a 5-assist night to talk about. Because this is Solomon Hill, and he doesn’t do those things. He is just a high-level on-ball defender who understands spacing, timing, and movement well while always competing hard and rarely making the type of positional and “I didn’t know the scheme” mistakes that drive coaches like Frank Vogel crazy and young players like Glenn Robinson III and Myles Turner and Joe Young make all the time.”

The non-athletic Hill seems like a defensive specialist who performs best when facing teams who lean heavily on switches to succeed. In other words teams like the Celtics who use their length and athleticism to win games.

In the 2016 playoffs versus the Toronto Raptors Hill came off the bench all seven games scoring only 54 points total, but had a slash line of .452/.579/.938. To sum up Hill can help the Heat in a specific, limited way.

“He was dropped from consideration for minutes the 1st half of the season because the Pacers wanted to play faster, hop on the “space and pace” trend a little bit, and Hill simply couldn’t score.”

“His ability to switch 1-4 and stop penetration helped stymie the effectiveness of opposing small ball lineups, and his increased offensive efficiency allowed him to stay on the floor.”

In a series of moves and counter-moves Spoelstra has his bag of-tricks to use as needed. The Celtics know it’s win or go home time for them. There’s no lack of motivation on their part. With 3-1 game advantages seemingly not entirely safe this post-season, Spoelstra may have to use the element of surprise to fend off a talented Boston team. The zone can only do so much.