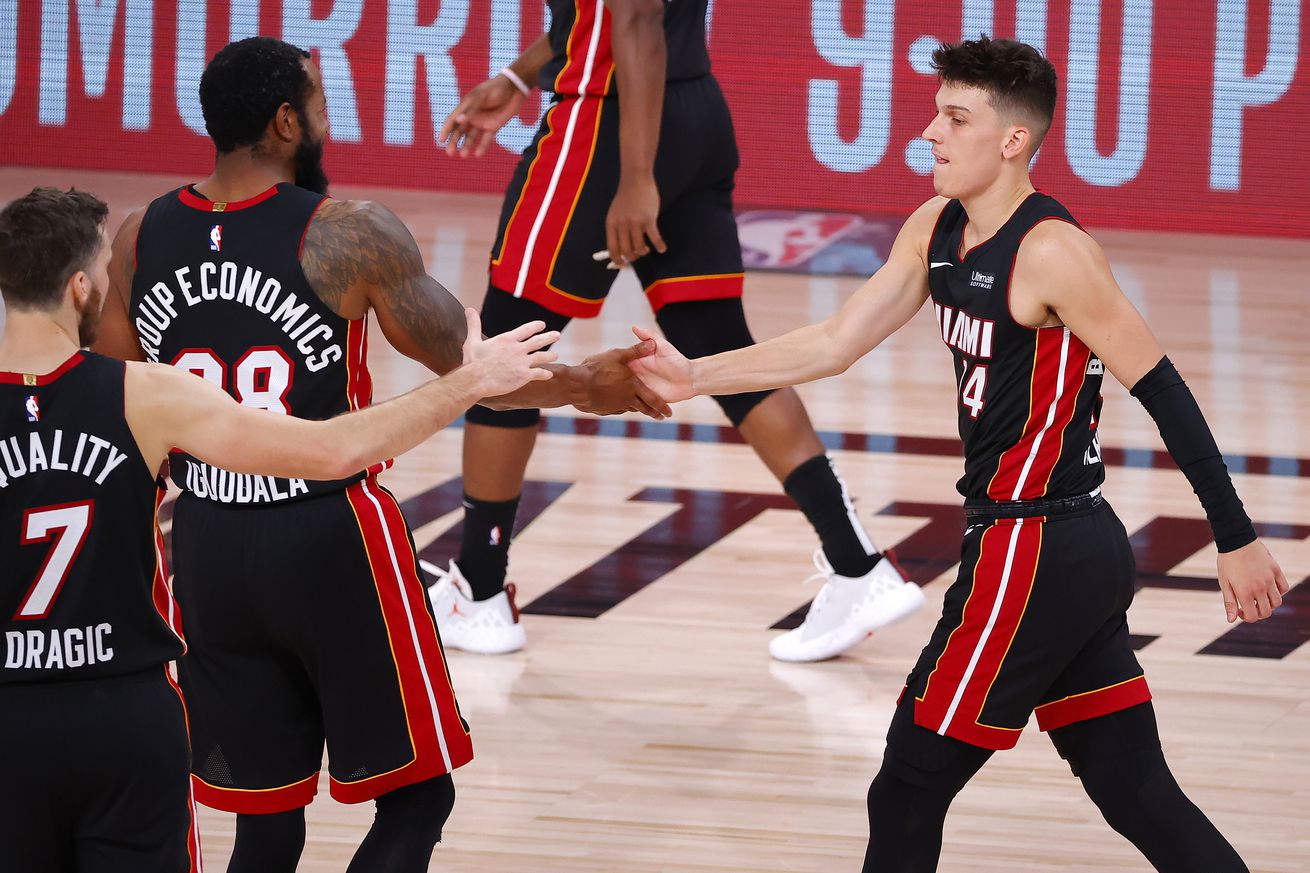 Miami is one win away from returning to the NBA Finals!

It wasn’t pretty and there was plenty of drama until the final seconds, just like every game in this evenly-matched series, but the Miami Heat emerged victorious with the incredible 112-109 win against the Boston Celtics to get within one game of reaching the NBA Finals.

As always it was a total team effort to withstand Boston’s relentless attack down the stretch, but it was Tyler Herro with a mind-blowing, historic game off the bench to score 37 points on 14-21 shooting, 5-10 from 3-point territory, with six rebounds, three assists and just one turnover.

This performance is going down in the HEAT playoff books.

He scored 17 points on 6-9 shooting in the fourth quarter alone, and become just the fourth rookie in NBA history to score 30+ points in a playoff game.

Tyler Herro dropping all these buckets at 20 years old pic.twitter.com/S17Jxfu7TG

The 37 points were not only a career-high, it was a playoff rookie record for a Heat player — beating out none other than Heat legend Dwyane Wade. It was also a franchise record for a rookie reserve in a regular season or playoff game.

It was a great record while it lasted https://t.co/U8Gp7g6SXl

Miami needed every single point from Herro, especially in the second half when the offense sputtered, and he was absolutely magnificent in crunch time — playing with supreme confidence and maturity as not only just a big-time scorer but a playmaker.

Coach Erik Spoelstra made the gutsy decision to cast aside his bench and only played Herro and Andre Iguodala (along with Solomon Hill — making his Heat postseason debut with four minutes) in addition to the starters. That left Derrick Jones Jr., Kelly Olynyk and Kendrick Nunn on the sidelines while Jae Crowder (1-9, 1-7 from deep) and Duncan Robinson (0-5 FG, 0-4 from deep) struggled mightily with just three points each.

Both teams struggled to shake off any residual rust from the long wait between Games 3 and 4, and the Heat’s 3-point shooting was abysmal at just 10-37 for 27%. Herro was responsible for half of them, his five a playoff-high, but the team was able to avoid a slow start in the first half and stay in the game in part to just eight turnovers (though a pair of them late in the game almost gave the Celtics a chance to steal the game).

Goran Dragic bounced back from a lackluster Game 3 with a huge performance, adding not just his 22 points but several timely plays in the final quarter to help give them their first substantial run of the game. Miami’s All-Star pair of Jimmy Butler and Bam Adebayo also had big games when the Heat needed them the most. They had to step up and they followed through with Bam notching 20 points, four assists, and 12 rebounds and Butler delivering with 24 points, nine rebounds, three assists, a block, a steal and just one turnover. Though the team struggled from deep, they went 24-27 from the free throw line including clutch makes from Herro and Butler to protect the lead.

Miami improves to an NBA-best 11-2 playoff record and are one win one away from reaching the NBA Finals for the sixth time in their proud and rich history, all since 2006.

Tyler Herro wants to do it for Jimmy pic.twitter.com/iwHd9sFi5b