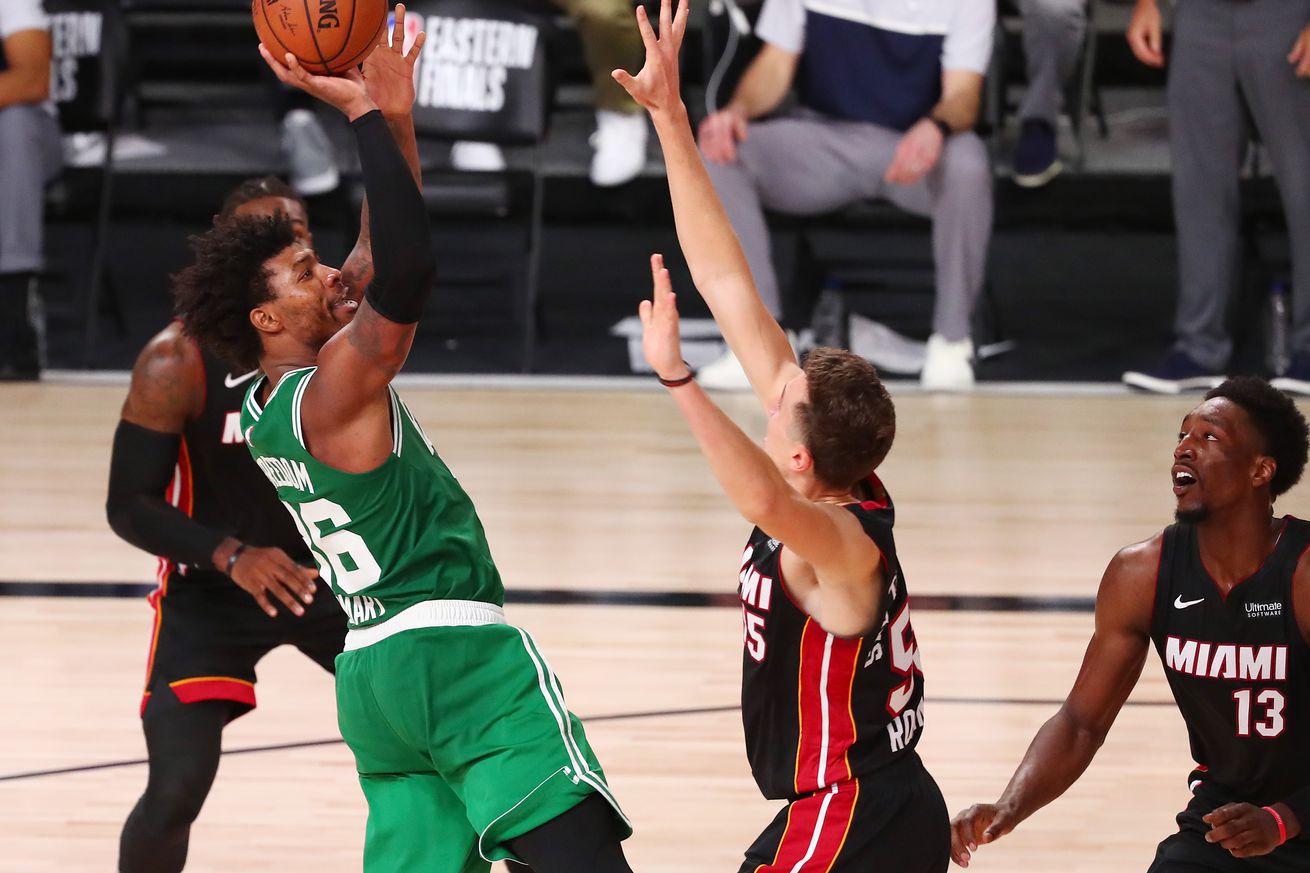 The return of Gordon Hayward gives the Celtics elite talent level up to a point.

The Miami Heat lost game three against a motivated Boston Celtics when Duncan Robinson sometimes became a de facto center in the zone defense. With Jimmy Butler and Jae Crowder at the top of the zone, whenever Bam Adebayo went out to the 3-point line to cover Daniel Theis that left Goran Dragic and Robinson as rim protectors. Didn’t work. In addition Robinson guarding the rim also lead to foul problems for him.

Game three marked the return of Gordon Hayward and appearance of the Celtics’ “Best Five,” which consists of Marcus Smart, Jayson Tatum, Jaylen Bown, Kemba Walker and Hayward. Who would play center when they are on the court together?

None of them match the bulk and strength of the Golden State Warriors’ 230 lb Draymond Green with his AST/TO of 5.0/2.1. However the Celtics’ version of Patrick Beverley, Marcus Smart, believes the quintet’s prowess on perimeter defense can handle heavier NBA players in the restricted area.

“But on the offensive end, our firepower is remarkable in the fact that you lock in on one or two guys, you’ve still got those other three guys, the guys that can hurt you.”

We saw what happens when a 210 lb Tatum tries to dunk on a 255 lb Adebayo. Earlier a 230 lb Butler pushed aside the 210 lb Tatum for a crucial and-one basket at the rim. The trio of Adebayo, Butler and 235 lb Crowder are all heavier than any player on the “Best Five.”

No doubt the Celtics have a ton of talent athletically and handling the ball on the court. At one point or other Boston had double-digit leads over Miami in all three games. Yet even with Theis in the lineup the starters top out at 6’8”, which is almost in Houston Rockets territory.

The Celtics caught a break in the first round when the Philadelphia 76ers didn’t have 6’10” and 240 lb Ben Simmons challenging their perimeter players. The Toronto Raptors took Boston to seven games. We’ll see what Miami learns from the loss in game three. The Heat still have to win two more games against the Celtics to finish what they started.