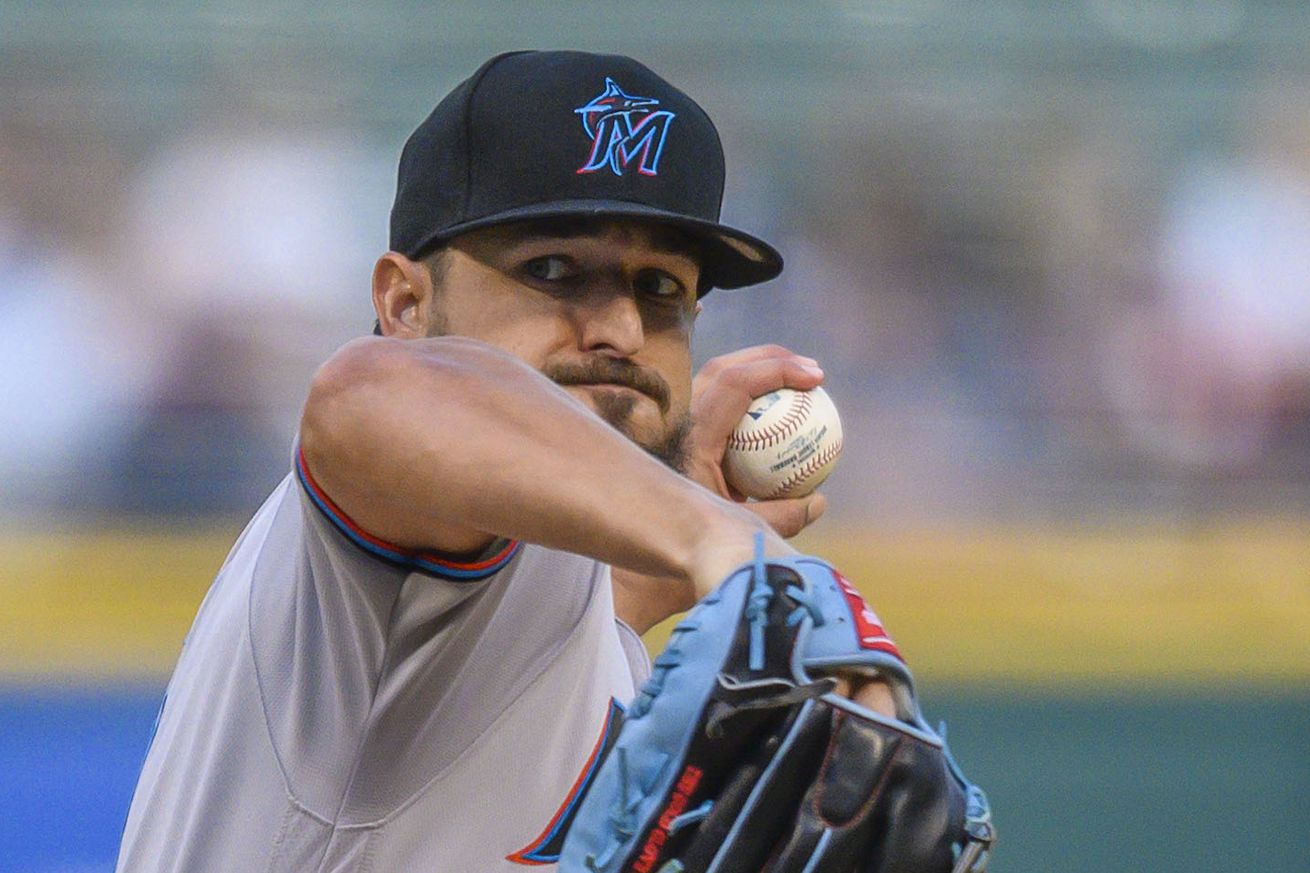 Can Dr. K regain his early 2019 velocity and find a way to generate more grounders?

Where Did He Come From? On November 20, 2017, the Marlins acquired left-hander Caleb Smith and first baseman/outfielder Garrett Cooper in a trade that sent right-hander Mike King and international bonus slot money to the Yankees.

Entering Spring Training, the Marlins attempted to temper expectations. Smith had undergone lat surgery the previous July. With crafty veterans like Dan Straily and Wei-Yin Chen around, there was no pressure to get him ready for the Opening Day rotation.

Then, Smith got the green light to pitch to live batters. There were whispers about how impressive his stuff and command were on the backfields in Jupiter. He progressed to Grapefruit League appearances, plowing through the Cardinals lineup on Mar. 13 and the Nationals on Mar. 18. He completed the spring with an absurd 19-to-1 strikeout-to-walk ratio, allowing only one home run in 13 1⁄3 innings.

Smith could not be denied a starting spot—the Marlins cut Straily and relegated Chen to mop-up duty.

The Huntsville, Texas native justified their faith in him by carrying the momentum over to the real games. Through the first quarter of the season, Smith was the undisputed MVP, Cy Young and most improved player on an otherwise pathetic club. He was, incredibly, racking up whiffs at a José Fernández-like rate. We even made a special t-shirt! (Yes, you can still order one here if you so desire.)

Face of the Franchise right there. Caleb Smith joins A.J. Burnett as only Marlins with 8+ strikeouts in 5 straight starts.

KKKKKKKKaleb is the first Marlin ever to do 5 straight in the same season. pic.twitter.com/EK3sihEhjU

The keys to Dr. K’s success were trusting his high-spin fastball up in the strike zone, locating his slider to both sides of the plate and keeping right-handed batters off balance with a nasty changeup.

All of Smith’s offerings had extraordinary swing-and-miss potential…at least they did in April and May.

And then, the turning point: hip inflammation. Smith attempted to pitch through the discomfort, but it sapped his velocity and command.

The Marlins finally diagnosed the issue following his rough outing in Milwaukee on Jun. 6, when the NL All-Star candidate was uncharacteristically clubbed by lefties.

Smith only rested briefly before building up his arm again. He returned to the major league rotation one month later, this time sharing the limelight with intriguing rookies Sandy Alcantara, Zac Gallen and Jordan Yamamoto.

From that point forward, Smith was plagued by gopheritis. He surrendered 20 home runs from July through the end of the 2019 regular season, the highest total in the National League. His fastball velocity never quite rebounded to its spring levels, nor did his strikeout rate.

As mentioned above, the changeup was an important weapon for Smith to overcome the platoon disadvantage.

Caleb’s changeup: We’re going dOWN, DOWN

So why did he stop throwing it?! Smith would typically use 15 changeups or more during his most dominant starts; after the All-Star break, he had a handful of starts in the single digits.

Including his minor league rehab work, Smith totaled 162 2⁄3 innings pitched (a new single-season career high). Strange as it was to see him make his pitch selection so predictable, and tempting as it is to dive deeper for more answers, I believe simple fatigue could go a long way towards explaining what went wrong.

After many years together, Caleb and Tori Smith officially got married in January.

They are parents to a three-year-old son, Ryker.

The “Dr. K” nickname is totally unoriginal, but Smith says he likes it anyway. Feel free to refer to him that way if you cross paths.

Each offseason, Smith escapes the chaos of our crazy society by going on a hunting trip with friends. You can follow along at @CalebASmith12 on Instagram and Twitter.

Further distancing himself from that left lat surgery should be a big benefit for the 28-year-old. Also, the 2019 workload sets him up to be a fixture in the rotation for a completely full season. Zero restrictions whatsoever.

During Smith’s two latest Spring Training starts, according to Statcast, his fastball velocity was sitting 89-91 miles per hour with the occasional 92; keep in mind, he was consistently at 91-94 mph a year ago. Something to monitor over his final Grapefruit League tune-ups.

Until Smith can find a way to generate more ground balls, his ceiling will be somewhat limited. Last season, 73.9% of his balls in play allowed were either fly balls or line drives. Per FanGraphs, that is the third-highest percentage ever recorded—data is available since 2002—for any season with at least 150 innings pitched, trailing only the 2006 and 2014 versions of Chris Young. He’s inviting extra-base hits, especially with the fences being brought in again at Marlins Park.

There isn’t much evidence to this point that the Marlins have seriously considered trading Smith. That could change during the summer if he remains healthy and the next wave of highly touted pitching prospects demonstrate that they’re ready to fill his shoes.