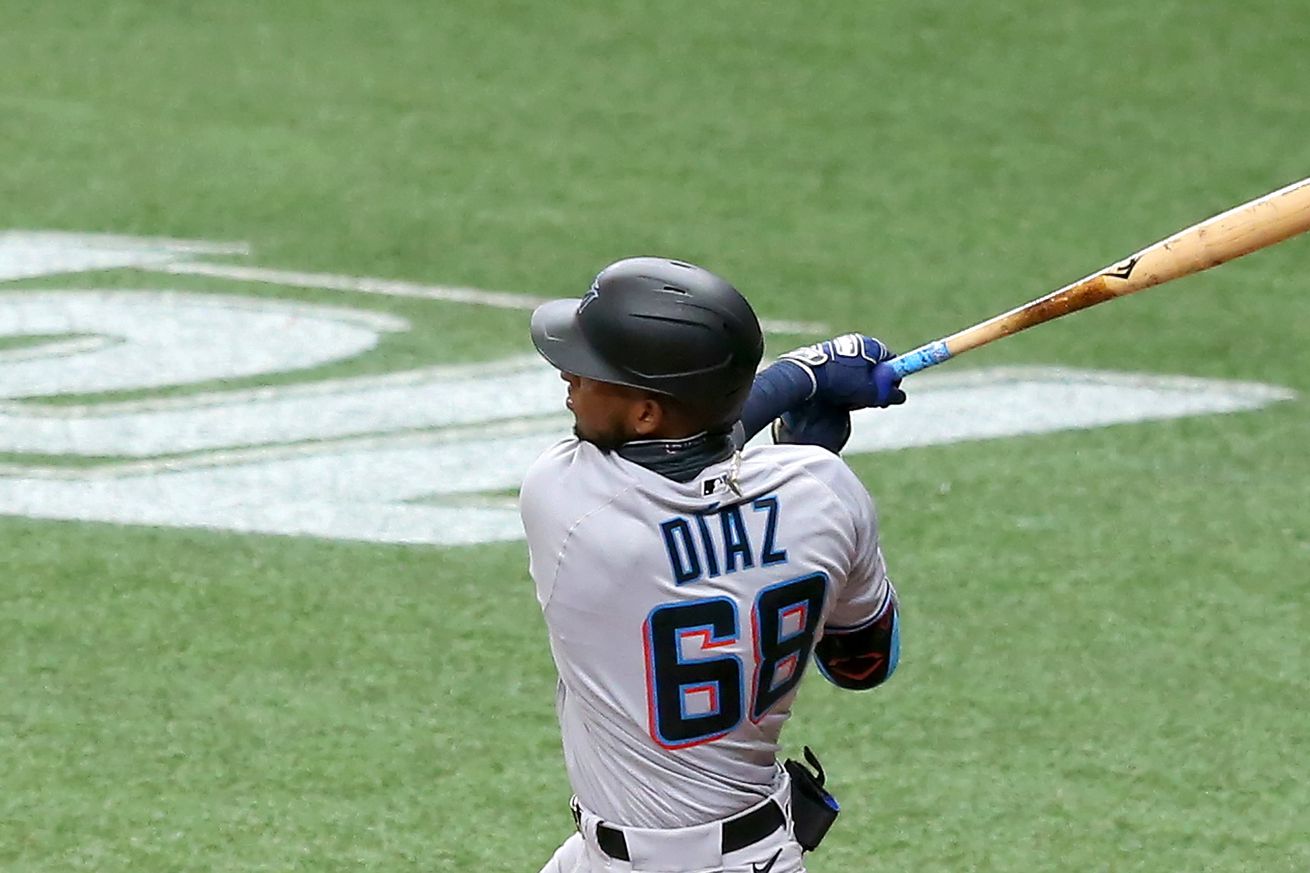 Díaz was all-glove, no-bat during his brief stints on the Marlins active roster.

One of my favorite Marlins prospects entering 2020, first baseman Lewin Díaz earned an exciting call-up this past season, but wasn’t able to show us the best version of himself. Are there any meaningful takeaways to be had from such a tiny sample?

Newly added to the Marlins 40-man roster during the 2019-20 offseason, Díaz participated in major league spring training. He was responsible for what proved to be the game-winning single in their Feb. 22 Grapefruit League opener. Overall, the 23-year-old posted a .269/.269/.462 slash line in 15 preseason games (26 plate appearances).

The Marlins optioned Díaz to Triple-A on Mar. 10, so that’s where he would have been playing at the start of the Minor League Baseball season if the pandemic hadn’t disrupted everybody’s plans.

Díaz spent the next three-and-a-half months training in his native Dominican Republic. He must’ve found the right regimen—early on in summer camp, he made a powerful impression on club officials, according to Craig Mish.

With MiLB canceled, the addition of a universal designated hitter and the expansion of the Opening Day active roster size from 26 spots to 30, Díaz was legitimately in the mix to be included. He traveled with the team to Atlanta for the Jul. 21-22 exhibition games and played both days.

Ultimately, the Marlins opted to send Díaz back to their alternate training site in Jupiter. The decision-makers were confident in a Jesús Aguilar/Garrett Cooper first base tandem. Lewin would’ve been just a glorified late-inning defensive sub, and it did not make much sense to stunt his development in such a restrictive role (or start the clock on his MLB service time).

Three-plus weeks later, Díaz got his opportunity. On Aug. 15, with Cooper still sidelined by COVID-19, Corey Dickerson went on the bereavement list following the passing of his grandfather. The Marlins recalled their young slugger in a corresponding move. He debuted as a pinch-hitter that night, singling to left field in his first career at-bat.

Dickerson’s Aug. 18 return squeezed Díaz off the active roster initially, but he came up for a second stint the following week as Aguilar was nursing a mild back injury. His most impactful moment at the plate happened on Aug. 31, a game-tying double against reigning NL Cy Young award winner Jacob deGrom (the Marlins would wind up winning).

Unfortunately, Díaz’s overall production in 14 games was insufficient (11 wRC+). He had one of MLB’s highest infield fly ball rates and a mediocre 29.3% strikeout rate, and didn’t blast any home runs to compensate for those wasted plate appearances. Against left-handed pitching, he went 0-for-12 with 6 K.

On the bright side, his fielding was perfect. In less than 100 defensive chances, Díaz demonstrated the skill set and the consistency to be one of the league’s best first basemen.

Last winter, Lewin Díaz won Rookie of the Year honors in the Dominican Winter League (LIDOM). I will be fascinated to see what he does for an encore as the 2020-21 season gets underway.

Díaz’s Estrellas Orientales are scheduled to play 14 games between now and the Dec. 2 MLB non-tender deadline. Regardless of his LIDOM performance, the Marlins will seriously consider letting Jesús Aguilar go—rather than commit to giving him a substantial pay raise in arbitration—but Díaz can make that decision easier by flaunting his smooth power stroke against such high-level competition.

Health permitting, Díaz will be a big league regular at some point during the 2021 campaign. That opportunity could arrive as soon as Opening Day if National League teams are once again allowed to use the DH.