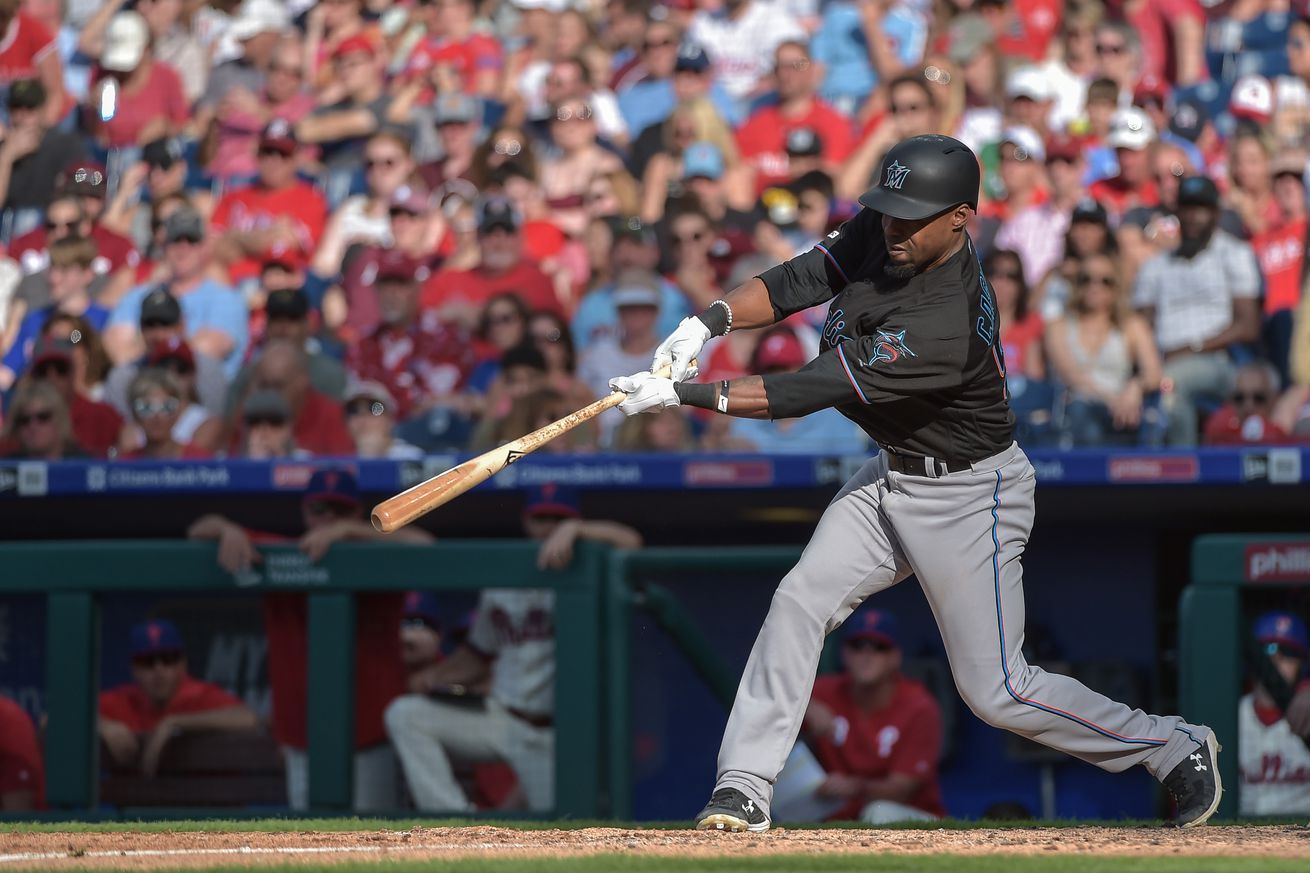 Here’s the first installment of our 165-part series on the all-time Marlins roster.

The Marlins have seen 630 players take the field for at least one plate appearance or batter faced through their 28-season major league history.

Without further adieu, here’s your first installment. All players included in this article are part of the first tier: less than 20 PA/BF, and below replacement level.

Oswaldo Arcia had a very short stint with the Miami Marlins, shorter even than the very well publicized acquisition and jettisoning of future Hall of Famer Mike Piazza. A native of Anaco, Venezuela, Arcia initially signed on through international free agency with the Minnesota Twins way back in 2007 at the age of 16.

The Marlins claimed Arcia, and used him as a pinch hitter on August 23 and 24 against the Kansas City Royals. He went 0-for-2 with a strikeout, and was subsequently waived by the Marlins four days after they claimed him.

Kevin Mattison was a native of Fort Lauderdale, born in 1985 and chosen by the Marlins in the 28th round of the 2008 draft. Through four seasons of minor league ball prior to his major league debut, he stole a total of 142 bases and grew a hell of a mustache.

A pinch hitter and left fielder, Mattison was called up to the Marlins and made his major league debut in May of 2010. On May 12 he went 0-for-1 as a pinch hitter in a 9-3 loss to the New York Mets. Later in the month, He came into a game against the San Francisco Giants in the seventh inning as a pinch hitter and ended up going 0-for-3 with a pair of whiffs. He followed that with another fruitless plate appearance on the following day, and was subsequently sent back to the minors.

After another season in the minors with the Marlins, Mattison was a rule 5 pick by the Milwaukee Brewers, but he never appeared at their top level. He later played some minor league ball with the Washington Nationals.

Yorman Bazardo of Maracay, Venezuela, signed with the Marlins through free agency in 2000 just days after his 16th birthday. Five seasons later, he made his major league debut with the Florida Marlins.

That was on May 26, 2005, in relief of Marlins starter Frank Castillo who had allowed five earned runs in 4 1⁄3 innings against the New York Mets. Bazardo fared even worse, surrendering five runs in only 1 2⁄3 frames. He struck out two, walked two, and gave up five hits. It was the only time he appeared for the franchise at the major league level.

Bazardo later went on to make subsequent major league appearances with the Houston Astros and the Detroit Tigers, pitching another 58 2⁄3 innings at the top level.

Born without a right hand, lefty pitcher Chad Bentz was a native of Juneau, Alaska. He was taken in the seventh round of the 2001 draft by the Montreal Expos. He spent some time in their system, until they were the Washington Nationals, then got released after the 2004 season.

The Marlins signed Bentz through free agency six days later. He made four appearances on the mound for the Marlins in June of 2005. In his first two, he got one out in each on a total of five pitches. So far so good, but not for long.

In his third appearance, on June 14 against the Chicago Cubs, Bentz came into the game trailing 9-0 in the eighth inning. He then gave up, in sequence, a Todd Walker single, a Todd Hollandsworth single, a three-run jack by Michael Barrett, and another single to Sergio Mitre. He then retired Enrique Wilson on a fly ball, but followed with a Jerry Hairston triple and a Derrek Lee double.

Seven days later, Bentz allowed two runs in an inning of relief against the Atlanta Braves and that was that. He later played in the systems of the Cincinnati Reds and the Chicago White Sox, but never again graduated to baseball’s top level.

Oshawa, Canada native Nigel Wilson signed on with the Toronto Blue Jays in 1987, at the age of 17. After five seasons in their minor league system, the Florida Marlins chose him with the second pick in the 1992 expansion draft.

Wilson didn’t make his major league debut until late in Florida’s inaugural campaign, on September 8. He started on that day and the next two, going 0-for-12 with seven strikeouts.

After that inauspicious debut, Wilson was limited to four pinch-hitting appearances and struck out four more times. It was the last time the Marlins gave him playing time, but he did take four errorless chances in 23 outfield innings of work.

Soon after getting Mouton, the Marlins started using him as a pinch hitter and late-inning defensive replacement for his first 17 Marlins appearances. He was 0-for-12 with four strikeouts during that time. He finally got his first hit for Florida when they decided to start him on May 15 against the San Francisco Giants. Batting eighth, he went one-for-four with an RBI-single. The Marlins released him a week later.

Over the next two years, Mouton played in the minors with the Detroit Tigers, the Expos, the New York Mets, the Philadelphia Phillies, and the Cleveland Indians.

Wilkin Castillo, a catcher, was 11-for-35 in 22 games for the Cincinnati Reds in 2008 and 2009. He then spent the next 10 seasons in the minor leagues, with the Reds, the Braves, the Colorado Rockies, the Pittsburgh Pirates, the Blue Jays, and the New York Yankees. At the age of 35, he returned to the majors with the Marlins.

The swing that gave the Marlins the lead. It had been ten years and 2 days since Wilkin Castillo had last played in a big league game. Just awesome. pic.twitter.com/HkEUgSnhaK

On June 22, 2019, in his first MLB game in over 10 years, Castillo drove in the winning run with a two-RBI-double in the top of the seventh inning of a 5-3 victory against the Phillies. He ended up going one-for-seven in two games for the Marlins. He spent the rest of the season in their minor league system, and rejoined the team for depth after the COVID-19 outbreak earlier this year.

That does it for the first installment of this planned 165-part series. Check back here at the same time tomorrow for a look at seven more Marlins.