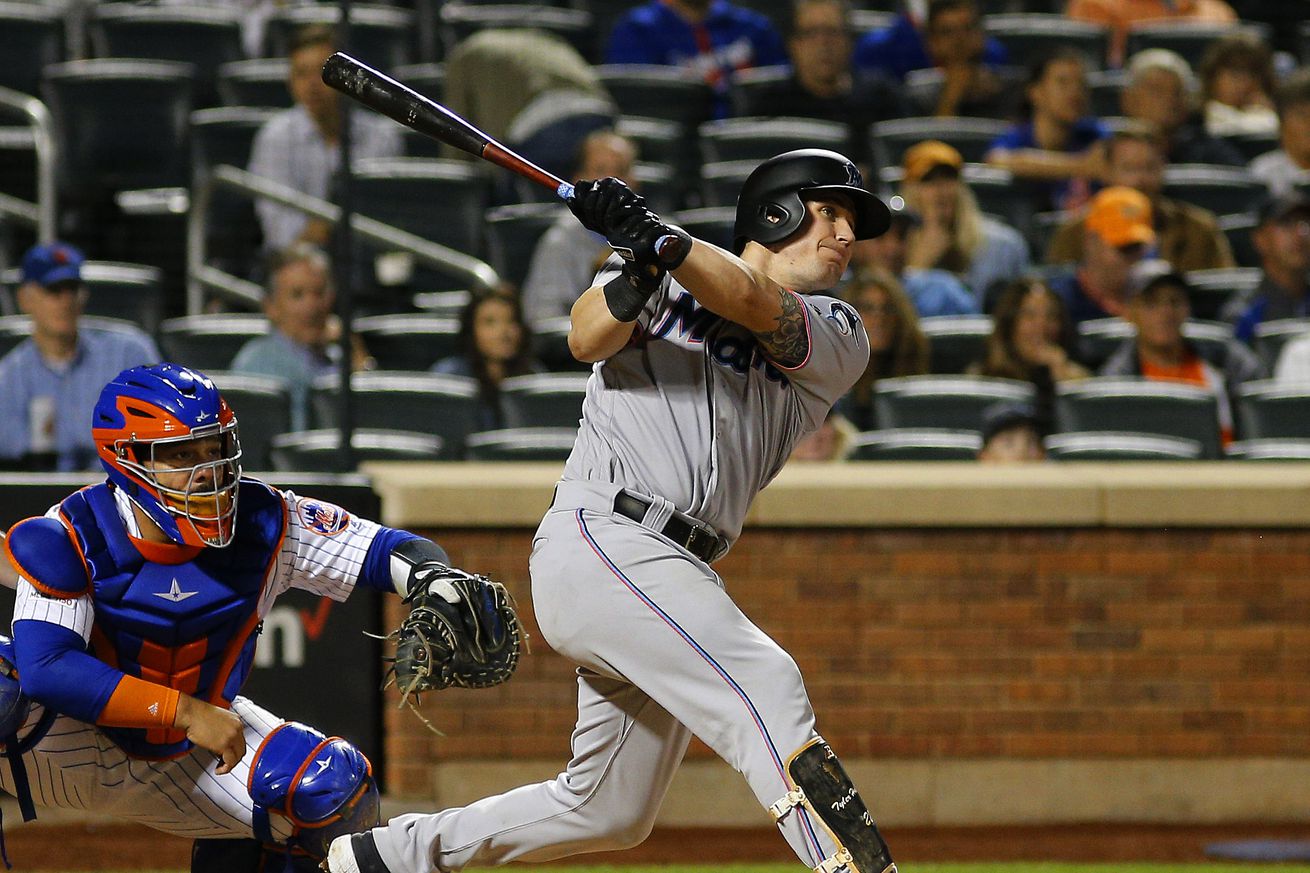 Here’s the latest installment of the all-time Marlins roster series featuring former players Tyler Heineman and Dallas McPherson, among others.

The Florida and Miami Marlins have been around for 28 seasons now, and have seen 630 players take the field in a regular season game.

The following seven players feature three from the second tier of the countdown and four more from the third tier. That is—three players with neutral brWAR and four with positive brWAR, all with under 20 plate appearances or batters faced.

Michael Neu was a 29th round choice of the Cincinnati Reds in 1999 out of the University of Miami. A five-foot-10 switch-hitting right-handed pitcher, Neu hails out of Napa, California. In 2002, the Oakland A’s chose him off the Reds roster in the year-ending rule 5 draft.

Neu played most of the 2004 campaign with the Triple-A Albuquerque Isotopes, where he was 1-2 with one save, a 6.34 ERA and 28 K’s in 38 1⁄3 innings. The Marlins called him up to work out of the bullpen in June. On the 11th, he entered against the Tigers trailing 6-0 with nobody out in the fourth inning. He faced 18 batters that day, allowing two runs on five hits and a pair of walks, striking out two batters as the Marlins ended up losing by an 8-4 final.

Chris Reed is a native of London, England, and the first round draft pick of the Los Angeles Dodgers in 2011 out of Stanford University. A left-handed pitcher, Reed spent four seasons in the Dodgers minor league system and part of a fifth when they traded him to the Marlins for Grant Dayton in mid-2015.

Reed pitched in 14 games for the New Orleans Zephyrs at the Triple-A level for the Marlins in 2015, going 1-0 with a 3.92 ERA and 23 whiffs in 20 2⁄3 innings. Miami called him up to the majors as August started, and he got into two major league contests for them.

Reed faced 18 batters over four innings of work, striking out only one batter while surrendering a pair of runs on six hits and a walk. Of his 51 major league offerings (to date), he put 32 of them over the plate.

Reed missed the entire 2017 campaign for Tommy John Surgery after pitching all of 2016 in the Marlins minors. His comeback in 2018 would see him pitch seven minor league innings before getting released outright on July 4.

Right-handed pitcher Steve Ames is a native of Vancouver, Washington. In 2009, the Los Angeles Dodgers made him their 17th round choice. Four seasons of minor league work later, the Dodgers traded Ames with Angel Sanchez and Josh Wall to the Marlins for Ricky Nolasco and cash in June, 2013.

After joining the Marlins organization, Ames pitched in nine contests at the Triple-A level with the New Orleans Zephyrs to a 3.75 ERA. At the end of July, the Marlins called him up to work out of the bullpen. In four appearances, he struck out four over four innings, allowing two runs on six hits and two walks. 52-of-76 pitches he put in the zone, good for 68 percent strike rate. His 2.000 WHIP, although over a small sample size, proved untenable for the Marlins.

Sent down to rejoin the Zephyrs, Ames pitched for the Marlins in the high-minors through the 2014 season, but he didn’t rejoin the major league staff. Miami released him just as the 2015 season was getting underway.

Corner infielder Dallas McPherson was a second round choice of the Anaheim Angels in 2001. A Greensboro, North Carolina native, he got to the big leagues with them in 2004. In parts of three major league seasons, he hit .247/.294/.461 with 18 round-trippers and 45 RBI. The Angels granted him free agency after he spent 2007 on the disabled list due to a surgical procedure fusing two of his vertebrae.

The Marlins signed McPherson in January 2008. He would play in 127 games at Triple-A for Florida with the Albuquerque Isotopes, where he slashed out a .275/.379/.618 line with 42 homers and 98 RBI. Called up to the Marlins in September, he played in 11 games down the stretch, going two-for-11 with a pair of doubles. He struck out five times, but also drew four walks for a solid .400 OBP.

Florida released McPherson just prior to the start of the 2009 campaign. He played minor league ball for the next few years before resurfacing with the Chicago White Sox in 2011, where he was two-for-15.

Cabecera, Panama native Manuel Barrios was a right-handed pitching prospect when he signed his initial professional contract at the age of 18 with the Houston Astros in 1993. He made it to the majors with them four years later, pitching in two games and giving up four runs in three innings.

After the close of the 1997 season, Houston traded Barrios, Oscar Henriquez, and Mark Johnson to the Marlins for Moises Alou. 1998 would see him strike out 22 in 24 1⁄3 innings for the Charlotte Knights at the Triple-A level for the Marlins. In May, he got his chance to pitch for Florida out of the bullpen. He pitched 2 2⁄3 innings, walking two, allowing four hits, and striking out only one. He put 29-of-46 pitches over the plate, good for a 63 percent strike rate.

Barrios didn’t pitch for the Marlins very long, due to them flipping him with Charles Johnson, Gary Sheffield, Jim Eisenreich, and Bobby Bonilla to the Los Angeles Dodgers for Mike Piazza and Todd Zeile on May 14. Barrios only pitched one more inning in the majors, walking two for L.A. on July 3.

Catcher Tyler Heineman was drafted by the Astros in 2012. A switch-hitting native of Pacific Palisades, California, he played most of five seasons in their minor league system. Later, he bounced around with the Milwaukee Brewers and the Arizona Diamondbacks. The Marlins purchased his contract from Arizona on June 5, 2019.

After joining the Marlins, they sent Heineman to the New Orleans Baby Cakes, where he slashed a solid .341/.397/.622 line in 48 contests. In September, when called up to Miami, he went three-for-11 in five games. On September 26, with the Marlins trailing, 2-0 in the eighth inning against the New York Mets, he hit a two run homer to tie it up. Curtis Granderson and Austin Dean later hit solo shots to claim a Marlins victory. Heineman also handled 27 defensive chances without an error over 23 1⁄3 innings, and gunned down one-of-two base stealers.

Heineman signed with the San Francisco Giants in January, and went eight-for-42 in 15 games.

Miami native Bill Hurst was a six-foot-seven right-handed pitcher. In 1989, the St. Louis Cardinals took him with their 20th round choice out of Central Florida Community College. He was released by them after four minor league seasons.

In 1996 for the Portland Sea Dogs at Double-A, Hurst saved 30 games and struck out 46 in 49 frames, reducing his walk rate by issuing 31 free passes. He was 2-3 with a 2.20 ERA. In September, the Marlins called him up to the majors. He faced a total of 10 batters and threw 55 percent of his 38 pitches for strikes. He walked one, struck out one, threw a wild pitch, gave up three hits, and totaled two innings of work.

After spending 1997 back in the minors for Florida, Hurst joined the Detroit Tigers in their system in 1998. He didn’t find his way back to the majors.