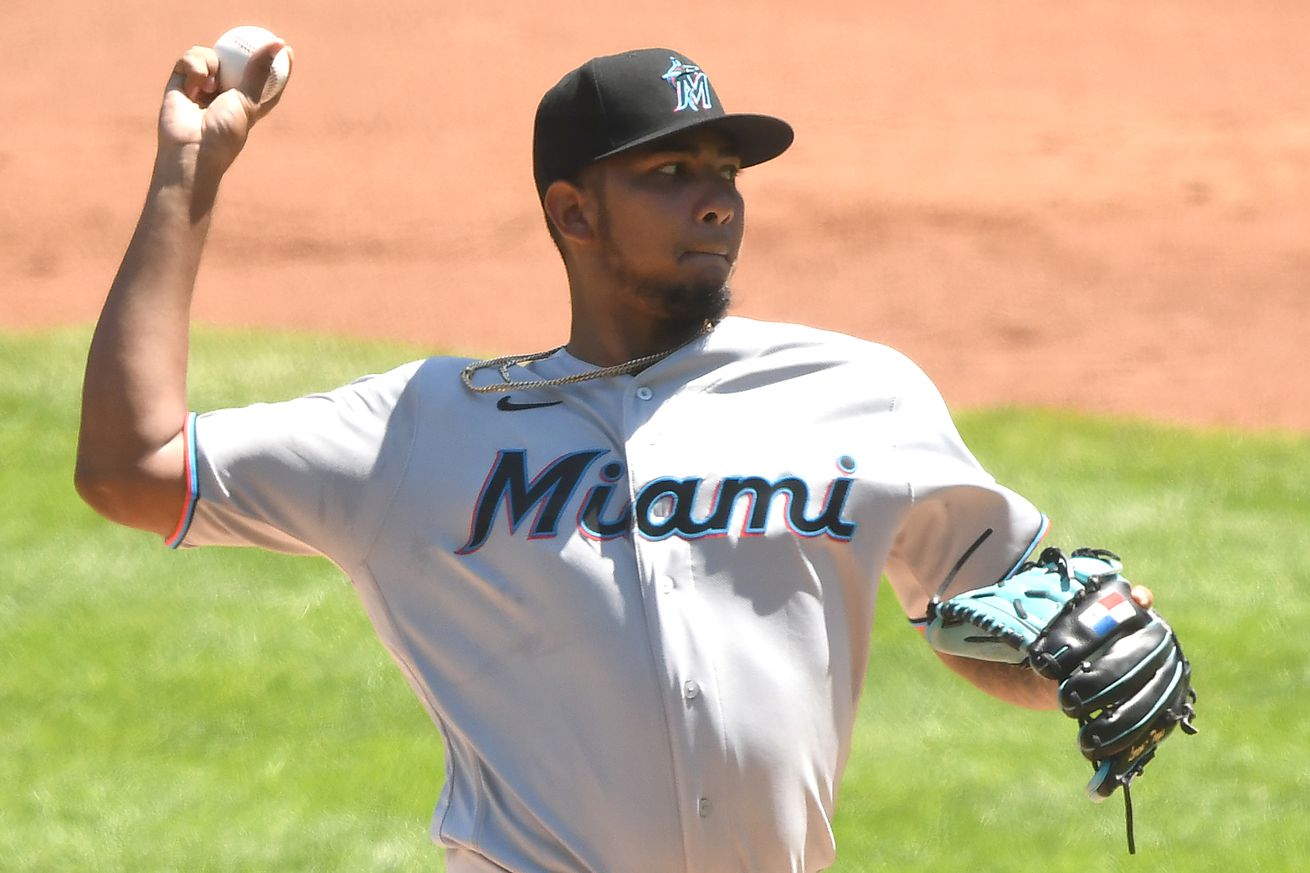 Round 24 of our All-Time Marlins Countdown features Humberto Mejia, amongst others.

The Florida and Miami Marlins have seen 630 players take the field for the team through their first 28 seasons of play. Today we feature six more on the road to number one.

Today’s feature has another six players on the road to number one on March 31. These six players were slightly below replacement level and had between 20 and 74 plate appearances while with the team.

Humberto Mejia is a six-foot-four right-handed pitcher from Panama City, Panama. In 2013, the Marlins signed Mejia to a minor league deal as a 16-year-old prospect.

Mejia first appeared in the Marlins system in 2015 when he put up a 3-3 record and a 1.69 ERA through 13 starts for the Rookie-Level DSL Marlins. He only surrendered one home run in 74 2⁄3 innings at that level.

Mejia continued on through the Marlins system up through 2019, taking 2017 off for undisclosed reasons. The unique challenges faced by Miami in 2020 necessitated his promotion to the majors at the age of 23. On August 7, he made his first career start at the level, striking out six New York Mets in only 2 1⁄3 innings. He allowed two hits, including a solo homer, and walked two for no-decision as the Marlins won, 4-3.

Mejia started twice more, totaling 10 innings through his first major league exposure. He struck out 11 in the end but gave up three home runs. He walked six and gave up 13 hits for eight runs (six earned). On August 31, the Marlins traded him to the Arizona Diamondbacks with Caleb Smith for Starling Marte.

Paul Clemens is a six-foot-four starting right-handed pitcher from Columbia, South Carolina. Twice drafted, he was most recently selected in the 2008 draft in the seventh round by the Atlanta Braves out of Louisville College.

Clemens worked his way up through the Braves system until mid-2011, when they traded him to the Houston Astros with three other players for Michael Bourn. It was Houston for whom he made his first major league appearances, playing in 48 games starting in 2013. He came out of the bullpen 43 of those times, and registered a 5.51 ERA in 98 innings of work. He struck out 65 and posted a 1.520 WHIP.

Clemens signed on with the Philadelphia Phillies and the Kansas City Royals for the 2015 season, but didn’t get back to the majors just yet. Following that season, he signed through free agency with the Marlins. For them, he started a pair of games in June and gave Miami 10 innings. He struck out six and walked eight while allowing five home runs and 11 hits in total for a 1.90 WHIP and a 6.30 ERA. Despite that, his Marlins career ended with a 1-0 record. The San Diego Padres claimed him off waivers on June 28.

Miguel Batista is a six-foot-one right-handed pitcher from Santo Domingo, Dominican Republic. In 1988, the Montreal Expos signed him through their international free agent program when he was still 17-years-old. Honestly though, almost every free agent signing for the Expos or Toronto Blue Jays is an international signing, am I right? But I digress.

Batista played in the Expos system until the 1991 season, when they lost him via rule 5 draft to the Pittsburgh Pirates. After allowing seven baserunners in two innings for the Bucs, they returned him to the ‘spos. Montreal released him after the 1994 campaign without him having made a major league appearance for them. The Marlins signed him three weeks later.

For the entire 1995 season, and most of 1996 as well, Batista played for the Marlins Triple-A affiliate, the Charlotte Knights. On August 8, he joined Florida and played in nine games for them. In 11 1⁄3 frames, he allowed nine hits for eight runs (seven earned) while walking seven and striking out six. During that time, he got 55 percent of his 147 offerings over the plate.

The Chicago Cubs claimed Batista off waivers after the 1996 season. He went on to play 16 more major league seasons, playing with the Diamondbacks, the Washington Nationals, the Seattle Mariners, the New York Mets, the Blue Jays, the Royals, the Atlanta Braves, and the St. Louis Cardinals as well as the Cubs. He retired after his age-41 season with a 102-115 career record, a 4.48 ERA, and a 1.49 WHIP over 1956 1⁄3 innings.

Right-handed pitcher Travis Smith was a 19th round pick of the Milwaukee Brewers in 1995. A five-foot-10 native of Springfield, Oregon, Smith was chosen out of Texas Tech University. He eventually appeared in one game for the Crew, allowing one hit in two innings in 1998, but did not play in his second major league game until 2002 with the St. Louis Cardinals.

Smith pitched 103 2⁄3 innings for the Marlins Triple-A outfit that season for the Albuquerque Isotopes where he was 7-8 with a 4.08 ERA. From the end of April through mid-July, he came into Marlins’ games out of the bullpen on 12 occasions. He plated 59 percent of his 191 pitches, striking out nine and giving up eight runs on five walks and 17 hits in 10 2⁄3 innings.

The Marlins didn’t retain Smith’s services past the 2005 season. He played 2006 in the Braves organization once more, but only appeared in one game for them.

Columbus, Ohio native Paul Hoover was a 23rd round pick of the Tampa Bay Devil Rays in 1997 out of Kent State University. A right handed catcher, Hoover eventually got to the majors with them in 2001, playing in eight games over the next two seasons. He went 4-for-21 with no walks, no extra base hits, and two RBI.

Over the next four seasons, Hoover played minor league ball with the Marlins, the Expos, and again with the Rays. Prior to 2006 Spring Training, the Marlins signed him through free agency once more. Hoover appeared in 20 games for the Marlins over the next three seasons in the majors, collecting 13 hits in 55 plate appearances. He hit one double and racked up three RBI, drawing two walks and striking out 19 times.

Defensively for the Marlins, Hoover made one error behind the plate out of 112 total chances. In 125 1⁄3 innings, he caught 4-of-11 runners trying to steal. He was guilty of three passed balls and was also on-hand for 10 wild pitches.

Hoover played another dozen major league games over the next two seasons with the Philadelphia Phillies.

Lefty pitcher Joel Adamson is a six-foot-four product of Lakewood, California. Drafted twice, he was more recently taken in the seventh round in 1990 by the Phillies. After the 1992 season, they traded him to the pre-debut Marlins with Matt Whisenant for Danny Jackson. Yeah. We had Danny Jackson. Chew on that.

Adamson got to the major leagues for the Marlins in 1996, and played in nine games. He struck out seven and walked as many, giving up nine earned runs on 18 hits for a 7.36 ERA and 2.273 WHIP. He didn’t get a plate appearance, and handled five fielding chances cleanly for a 1.000 fPct. Florida traded Adamson to the Brewers for a PTBNL after the season, and Milwaukee eventually sent Ed Collins in his place.

Adamson racked up a decent 1.271 WHIP in his 76 1⁄3 innings for Milwaukee in 1997, and played in another five games in 1998 for the Diamondbacks. That was his final major league exposure.