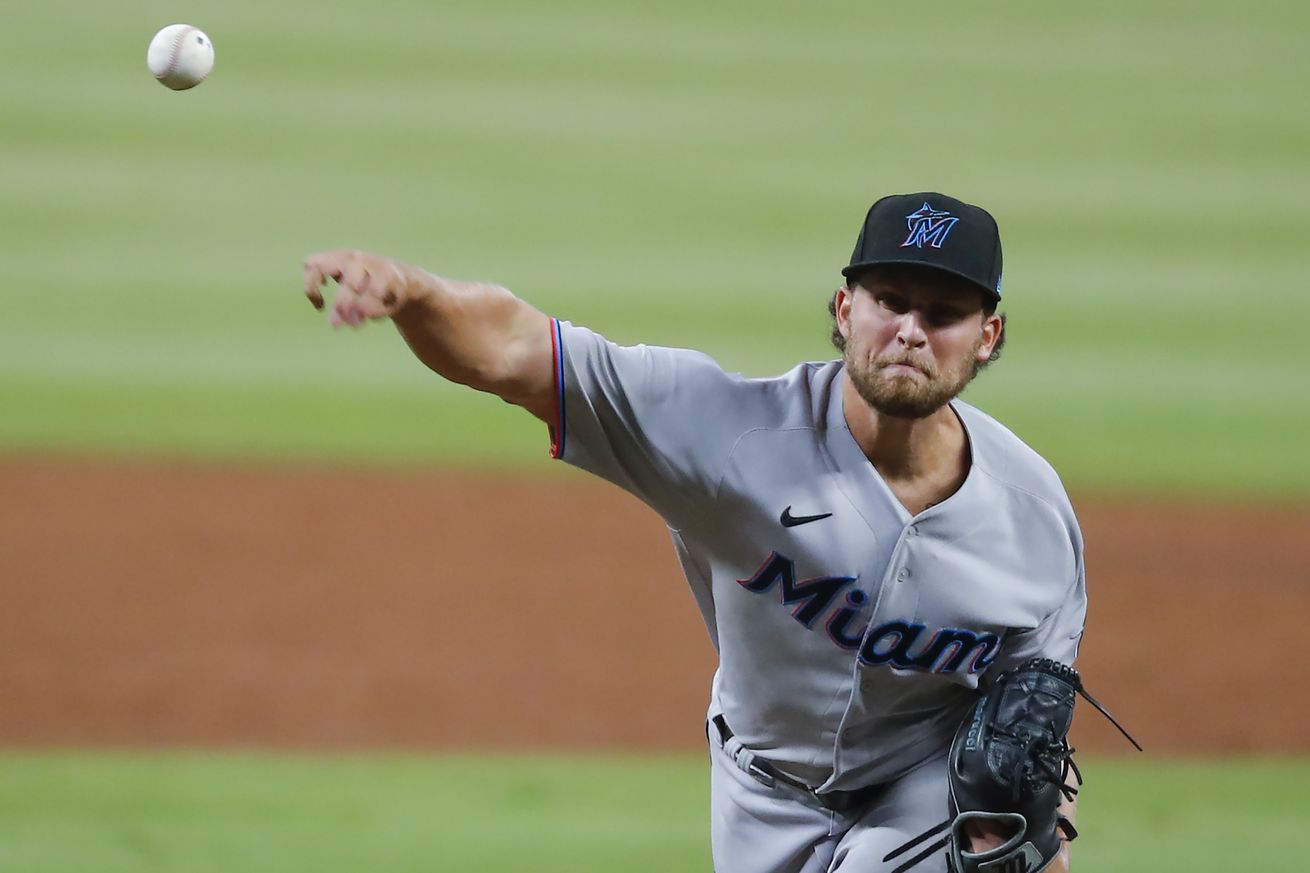 In the 26th chapter of our offseason-long 165-part series, we look at another six of the 630 to play for the Marlins over their first 28 seasons.

The six players mentioned in today’s article all had between 20 and 74 plate appearances, and all came in at exactly replacement level.

Tampa, Florida native Carl Everett was a switch-hitting outfielder and the New York Yankees first round selection back in 1990. After three seasons of minor league ball, the Yankees lost Everett to the brand-new Florida Marlins in the expansion draft.

Everett spent a giant chunk of his two seasons with the Marlins organization at their Triple-A level affiliate, the Edmonton Trappers. On July 1, he made his major league debut as a defensive replacement in center field in the ninth inning of a 7-5 victory against the New York Mets. In 11 total games he collected only two hits in 20 plate appearances, drawing a walk, stealing a base, and striking out nine times. Things would get better.

In May 1994, Everett rejoined the parent level for another 16 big-league contests. He collected multiple hits in three of them, going 11-for-51 with three walks, four stolen bases, seven runs, a double, two homers, six RBI, and 15 strikeouts. At 0.2 brWAR, Everett’s negative mark from the season prior was neatly cancelled. In 145 total innings in the outfield, he made 34 putouts, assisted on two plays, and committed one error for a .971 fielding percentage.

Florida traded Everett to the New York Mets for Quilvio Veras following the 1994 campaign. He would subsequently get traded an additional five times through his career, and play for the Mets, the Chicago White Sox, the Boston Red Sox, the Texas Rangers, the Houston Astros, the Montreal Expos, and the Seattle Mariners, making the American League All Star team in 2000 and in 2003.

Vin Mazzaro was a third round selection of the Oakland Athletics in the 2005 draft. A Hackensack, New Jersey native, Mazzaro is a right-handed pitcher. Four seasons later, he made his major league debut with the A’s, and got what would remain the most significant playing time of his career in two seasons with the club. He totaled 213 2⁄3 innings, starting in 35 of his 41 appearances and going 10-17 with a 4.72 ERA, a 1.573 WHIP, and 138 K’s. Following 2010, the A’s traded him with Justin Marks to the Kansas City Royals for David DeJesus.

Two seasons with the Royals featured Mazzaro far less than he had with Oakland. He played in 25 games, including 10 starts, and went 5-4 with a 6.72 ERA, 36 whiffs in 72 1⁄3 innings, and a 1.770 WHIP. Another trade put Mazzaro in a Pittsburgh Pirates uniform, again for two seasons.

In January 2015, Mazzaro signed with the Marlins through free agency and played in 10 games in relief. He totaled a dozen innings, with six walks and six strikeouts. Mazzaro ended up surrendering five earned runs during that time for a 3.75 ERA on 15 hits. Although he didn’t figure into any decisions, his best positively weighted interaction was on May 30 against the Mets, when he retired each of the five batters he faced in a 9-5 victory. During his tenure, he put 59 percent of his 200 pitches over the plate. Miami released him on June 28.

Mazzaro later signed with the Atlanta Braves, the San Francisco Giants, and the Cincinnati Reds, appearing in the majors for one inning with the Giants. He allowed nine runs in that one inning, and hasn’t got back to the majors since.

Jeff Abbott is a right-handed hitting, left-handed throwing outfielder from Atlanta. Taken in round 32 of the 1993 draft by the Chicago White Sox out of the University of Kentucky. Instead, Abbott returned for a senior season, and hit .445/.477/.886 with 23 round trippers and 64 RBI. His performance triggered the White Sox to spend their fourth round pick on him in 1994. This time he signed.

Abbott reached the majors for Chicago in 1997, and played at the top level of baseball with the south-siders for four seasons. In 205 games he hit .264/.306/.422 and smacked 18 home runs while collecting 78 RBI. After the 2000 campaign, the White Sox sent him to the Marlins for Julio Ramirez.

Abbott spent the majority of his time with the Marlins Triple-A affiliate, the Calgary Cannons in 2001. In 47 games he hit .320 with nine homers. On the last day of July, the Marlins called him to the big show. In 28 games with Florida, he went 11-for-42 for the plate with three doubles and five RBI. He drew three walks, scored five runs, and struck out seven times. In his best game on August 9, he started in center field and batted seventh, going two for four with a run and an RBI. His RBI single in the bottom of the eighth proved to be the game winner in a 3-1 Marlins win.

Defensively for the Marlins, Abbott made 26 putouts against one error for a .963 overall fielding percentage over 85 2⁄3 outfield innings, mostly in center. Florida granted his free agency following the conclusion of the season.

Later, Abbott signed minor league deals with Boston, the New York Mets, and the Mariners, but never returned to the majors.

Right-handed pitcher Nick Neidert made his major league debut for the Miami Marlins on July 25 of this year, allowing one hit and one walk in 2 1⁄3 innings of relief in the Marlins second game of the season, a 7-1 loss to the Philadelphia Phillies. This was followed by a six-week stay on the injured list, likely due to the COVID-19 outbreak on the team.

Neidert is a native of Suwanee, Georgia, and the Seattle Mariners second round pick in 2015 out of high school. A six-foot-one, right-handed pitcher, he was traded from the Mariners to the Marlins after the 2017 campaign with Robert Dugger and Christopher Torres for Dee Gordon and international bonus-slot money. He opened 2018 as Miami’s number 10 ranked prospect.

Neidert returned to the Marlins proper after his stay on the IL, and pitched another six innings over three games. He ended the season with 10 hits and two walks allowed in 8 1⁄3 innings, for five earned runs. He struck out four, and got 59 percent of his 132 total pitches between the wickets for strikes. Neidert is still rookie-eligible for the 2021 season.

In 1988, the Texas Rangers drafted Monty Farris with the sixth overall selection in the draft. Farris hit 12 homers with 58 RBI in 69 games for the Oklahoma State Cowboys in 1986, with 74 walks versus 61 strikeouts. He eventually made his major league debut with Texas in 1991, and played in 86 games over the next two seasons at Arlington. He hit .223/.314/.335 with four round-trippers and 27 RBI.

In the 1992 expansion draft, the Florida Marlins chose Farris with the 69th pick. He joined the team on June 12, and played in 18 of Florida’s next 46 games, going five-for-29 from the plate with two doubles and a triple. He scored three times, had a pair of RBI, and drew five walks while striking out 13 times.

The highlight of Farris’ tenure with the Marlins was likely on April 27, when Fariss tripled then scored to tie the Cincinnati Reds at two in the second inning of an eventual 4-3 Florida victory. Farris spend 1994 with the Edmonton Trappers, the Marlins PCL affiliate, and hit .285/.374/.527 with 20 homers and 60 RBI. Despite that solid line, the Marlins never called him up again, and Farris never again reached the majors.

Josh Booty was a two-sport star from Starkville, Mississippi, excelling in both baseball and football. He was the Florida Marlins’ first round pick in 1994, and later played Quarterback on the Cleveland Browns practice squad from 2001 through 2003.

Prior to his professional football career, Booty rose through the Marlins minors, peaking as the number 24 prospect in all of baseball in 1995. In 1996, he made his major league debut with Florida going one-for-two from the plate. In 1997, he upped that by appearing in four games and going three-for-five with an RBI.

No longer ranked as a prospect, Booty appeared with the Marlins for a third season in 1998, and played in seven games. Like in 1997, he again collected three hits, but unfortunately, it was over 22 plate appearances. He hit a double, drove in three, and drew three walks while striking out eight times. Defensively, as a third baseman, Booty made four errors in 65 1⁄3 innings of work for an .840 fielding percentage.