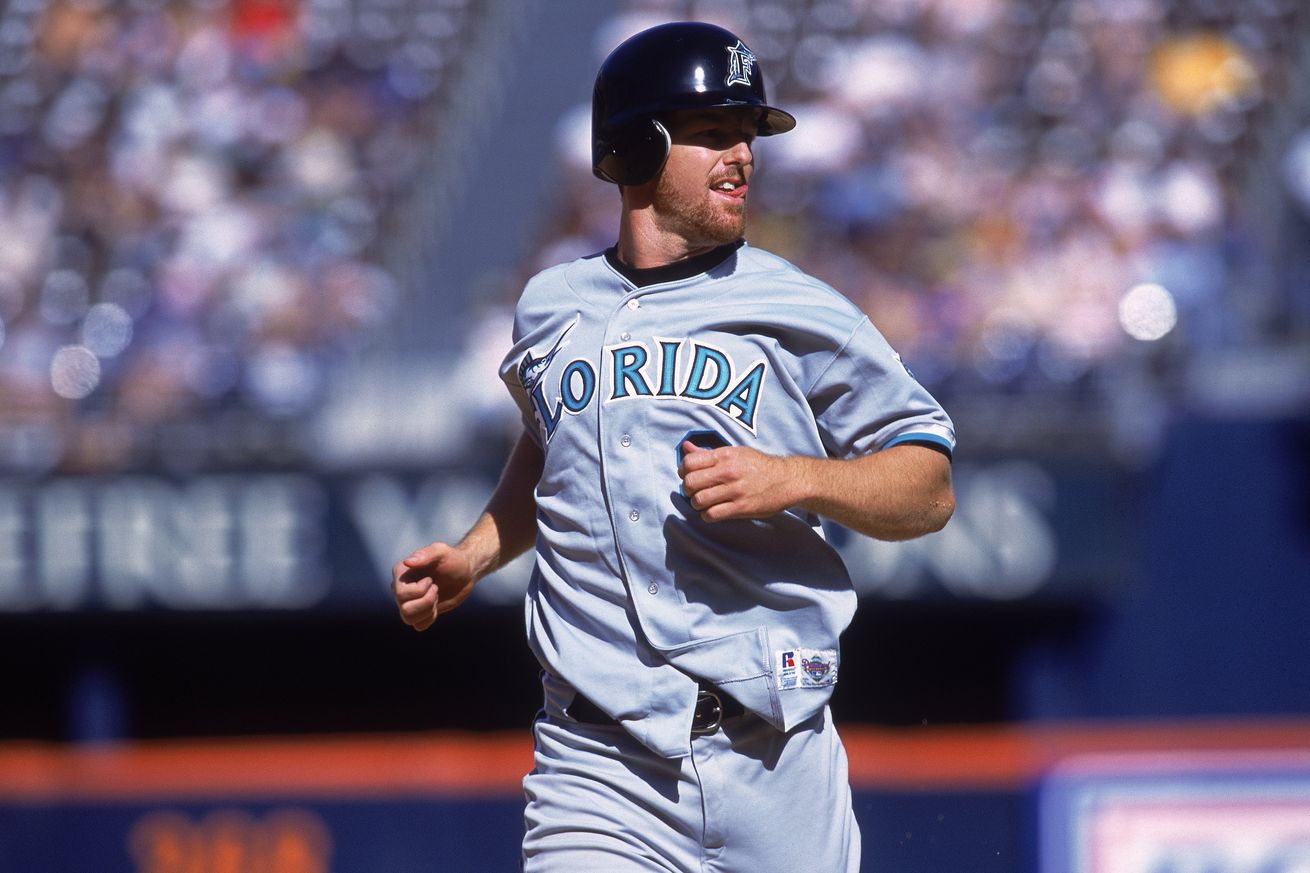 Ryan McGuire is amongst the six players featured in today’s story.

We’ve already covered 171 men to have played in at least one game for the Florida / Miami Marlins. We’re not planning to stop until we’ve checked out all 630.

Today’s article features six players who had between 20 and 74 plate appearances/batters faced while with the team. Most of the players listed in this story came in above replacement level.

Dallas native Chad Allen is a right-handed left-fielder. In 1993, the Cincinnati Reds chose him in round number 38 out of high school. Instead of signing, Allen elected to attend college at Texas A&M. In three Division 1 seasons, he appeared in 171 contests and totaled 19 homers, 130 RBI, and 49 stolen bases in 60 attempts. He drew 103 walks versus 70 strikeouts in total, and hit .350.

Allen signed with the Baltimore Orioles through free agency during 2002 Spring Training, but was released without making a major league appearance. Soon afterward, he signed on with the Cleveland Indians, and went one-for-10 with them in five major league games. Released once more after the season, the Marlins signed him on Thanksgiving week.

Allen appeared in a dozen games for the Marlins from mid-May through mid-June, and went five-for-24 from the plate with a double and triple. He drew zero walks, scored twice, and struck out five times. In 45 innings in the outfield, mostly in left, Allen made 13 putouts and assisted on one play without an error. He played the bulk of the season with the Marlins Triple-A unit, the Albuquerque Isotopes, and hit .323 with eight home runs and 53 RBI.

In an example of the worst possible timing for Allen, he got released by the Marlins organization on September 29, just before the start of the playoffs and Florida’s eventual World Series Championship. Allen later played in 41 games for the Texas Rangers in 2004 and in 2004.

Kendry Flores is a six-foot-two right-handed pitcher from Azua, Dominican Republic. In 2009, while still just 17-years-old, he signed his first professional contract to play rookie ball for the San Francisco Giants. After five full seasons in the Giants minor league system, they traded him with Luis Castillo to the Marlins for Casey McGehee.

In 2015, Flores appeared at Miami’s top three minor league clubs, as well as clocking his major league debut on June 6. Through his first six appearances at the top level, he managed to hold the opposition to two earned runs in 7 2⁄3 innings, striking out four and giving up two walks and nine hits. A lot of that was undone in his first career start on August 21, when he surrendered five runs in as many innings, allowing seven hits and two walks while whiffing five in a 7-1 loss to the Philadelphia Phillies.

That last start notwithstanding, Flores opened the 2016 campaign as a ranked prospect for the first time, placing fifth in both Baseball America and the MLB Pipeline’s respective lists. On May 14, in the second game of a doubleheader against the Washington Nationals, he threw three shutout innings to start the contest, a game the Marlins won by a 7-1 score.

Assigned to the seven day DL soon afterward, Flores was sent to the New Orleans Zephyrs to rehab, but never again appeared in the major leagues. He’s been a free agent since November 7, 2016.

Bellflower, California native Ryan McGuire was drafted by the Boston Red Sox in the third round of the 1993 draft. A 6-foot-2 first baseman, McGuire spent three years in Boston’s organization. He led the Carolina League in 1994 with a 13.6 percent walk-rate for the Lynchburg Red Sox and ranked second in the Eastern League with a .333 batting average in 1995 for the Trenton Thunder.

Prior to the 1996 campaign, the Red Sox traded McGuire with Shayne Bennett and Rheal Cormier to the Montreal Expos for Wil Cordero and Bryan Eversgard. It was with the Expos for whom McGuire made his major league debut, playing in 302 games over the next three seasons. For the north-of-the-border outfit, McGuire hit .220/.316/.324 with six homers and 45 RBI. Montreal granted his free agency following the 1999 season.

McGuire went 0-for-2 for the New York Mets at the major league level in 2000 in one game. The first half of the 2001 season was spent by him with the Marlins proper. In 48 games from mid-April through the start of July, he pinch hit for the team in 39 of them. At the plate, he was 10-for-54 with two doubles, a home run, and eight RBI. He scored eight runs, drawing seven walks and striking out 15 times. On May 31, he hit a pinch-hit grand slam to put the Marlins up 5-3 over the Mets in what turned out to be the game-winning hit.

Caracas, Venezuela native Harvey García signed with the Florida Marlins through free agency in 2000 at the age of 16. A right-handed pitcher, García was released two seasons later without appearing in a non-intersquad game. Signed by the Boston Red Sox, he played three seasons in their system before he got traded back to Florida in a seven-player deal also involving Hanley Ramirez, Anibal Sanchez, Mike Lowell, and Josh Beckett.

The 2006 season would see García post 21 saves for the Marlins High-A affiliate, the Jupiter Hammerheads. He would compete in Double-A and Triple-A through the 2007 minor league season. At the conclusion of that, and with the roster expansion to start September, García was called up for his major league debut.

García played in eight games for the Marlins, striking out 15 in 12 1⁄3 innings. He allowed six earned runs on 14 hits and seven walks for a 1.703 WHIP, and landed on an ERA+ mark of 102, just slightly better than the National League average. Of his 221 pitches, 61 percent finished over the plate. He didn’t have a plate appearance, and made one error in three chances for an unfortunate lifetime fielding percentage of .667.

Released after the season, García later signed minor league deals for the Pittsburgh Pirates and the Los Angeles Dodgers, but didn’t get back to the majors.

Will Ohman is a native of Frankfurt, Germany, and the Chicago Cubs eighth round pick in 1998. Drafted out of Pepperdine University, Ohman is a left-handed pitcher.

Ohman made his first major league appearance for Chicago in 2000, and played in 17 games over the next two seasons before missing the following two years due to Tommy John Surgery. Eventually, he played in 220 games for the Cubs, striking out 166 in 160 frames overall, all in relief.

Ohman later played a season each for the Atlanta Braves and the Dodgers. The first part of the 2010 campaign was spent with Baltimore before a trade-deadline deal for Rick van den Hurk made him a Florida Marlin.

Ohman was added to the Marlins bullpen for the remainder of the season, and played in 17 games down the stretch for Florida. He struck out 14 in 12 innings and allowed four earned runs on 10 hits and five walks. He went 0-2 and posted a 1.250 WHIP. He plated 59 percent of his 231 offerings for the Marlins, and allowed an opposing slash of .222/.294/.356. He didn’t have a plate appearance or a fielding chance during his tenure.

Ohman was not issued a qualifying offer by the Marlins following the season, and signed with the Chicago White Sox. He played 91 games for them over two seasons, pitching to a 4.95 ERA.

José García is a five-foot-11 native of Dajabon, Dominican Republic. The Florida Marlins signed him through their international free agency program on the day before Independence Day, 2001, when García was 16 1⁄2 years old.

The Marlins were coy with García’s development, at least at first. So much so that he didn’t appear in a non-intra-squad game until 2005. After going 12-9 with a 2.67 ERA between the High-A Hammerheads and the Double-A Carolina Mudcats in 2006, things seemed to happen a little quicker for him.

García made his major league debut in September of 2006, and played in five games out of the bullpen for the Marlins. He struck out eight in 11 innings of work, and allowed six runs on 10 hits and five walks. In his final game, in the last game of the season on October 1, he showed everything good and bad about his game to anyone watching. He whiffed six Phillies in only 3 2⁄3 innings, but also walked four and gave up two hits. Although he only gave up one run, it would be his last major league appearance.