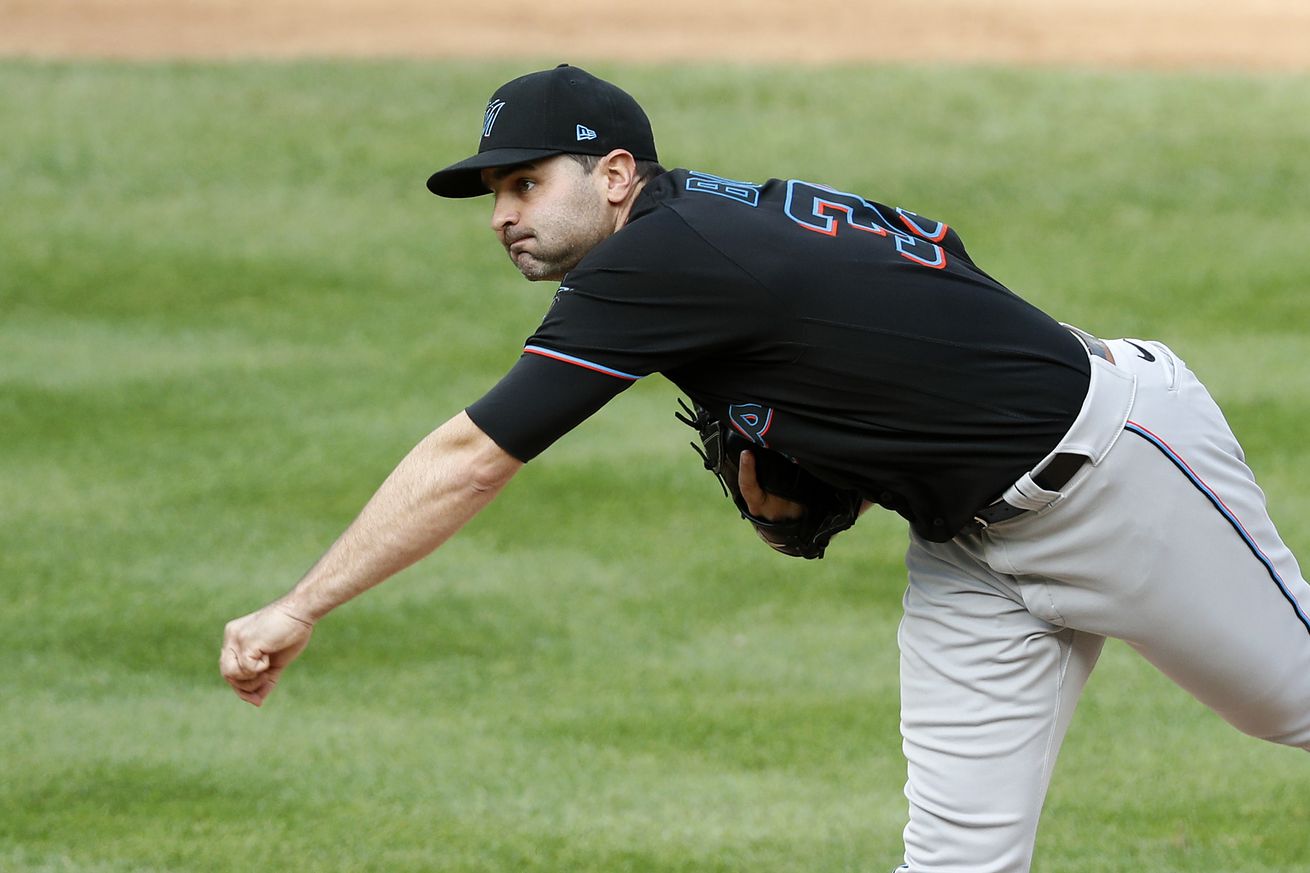 Today’s chapter in our offseason-long series features Richard Bleier, Kyle Keller, and others.

The 28th part of our 165-part offseason-long series features another six Marlins, past and present.

We’ve already gone through 177 Marlins from their earliest days right through 2020. We still have 453 to go. Today’s six players all had between 20 and 74 plate appearances, and all were above replacement level. Might as well dive right in.

Right-handed pitcher Nick Masset was an eighth round choice of the Texas Rangers in 2000 out of high school. A St. Petersburg, Florida native, Masset remained in Texas’ minor league system for seven seasons, making his debut in the big leagues in 2006. Prior to joining the Marlins in 2015, he also played for the Chicago White Sox, the Cincinnati Reds, and the Colorado Rockies. His pre-Marlins career would see him rack up a 4.02 ERA and 321 whiffs in 378 innings.

Prior to 2015’s Spring Training, Masset signed with the Marlins through free agency. He played in eight games for Miami, striking out six in 9 2⁄3 innings. He allowed three runs (two earned) on 12 hits and one walk, putting 67 percent of his 135 pitches over the plate. He didn’t have a plate appearance while with the team, and had one putout for a perfect fielding percentage. On May 19, the Marlins granted his free agency.

Masset soon thereafter signed on with the Atlanta Braves, and played in 20 games for them through the remainder of the season. It was his last major-league action to date.

Héctor Almonte is a six-foot-two right-handed pitcher from Santo Domingo, Dominican Republic. In 1993, the Marlins signed him through international free agency at the age of 18.

It took six years and then some, but Almonte got to the majors for the Marlins in 1999. He played in 15 games starting at the beginning of August, making 254 total pitches and putting 63 percent of them over the plate. In 15 frames in total, Almonte allowed seven earned runs on 20 hits and six walks, striking out eight. His bottom line was 0-2 with a 4.20 ERA, but the team went 3-12 in games in which he appeared in.

In 2000, Almonte pitched at the Marlins top three levels of the minors, but didn’t get back to the majors. 2001 would see him go overseas for the Yomiuri Giants in Japan’s Central League. He returned stateside with the Boston Red Sox organization in 2003, and also played for the Montreal Expos in that same year. He put up a 7.12 ERA in 36 2⁄3 innings over 35 appearances, and did not return to the big leagues.

Davie, Florida native Richard Bleier was a sixth round pick of the Texas Rangers in 2008, out of Florida Gulf Coast Community College. A six-foot-three left-handed pitcher, Bleier never did make the cut while with the Rangers, and was taken in the 2013 Rule 5 draft by the Toronto Blue Jays.

Bleier would go on to also play minor league ball for the Toronto Blue Jays and the New York Yankees before finally making his way to the big show in 2016 with the Bronx Bombers. From 2017 through the first part of 2020, he played for the Baltimore Orioles.

Bleier’s pre-2020 career saw Bleier go 8-1 with a 3.05 ERA and a 1.22 WHIP. His biggest strength is his bottom scraping walk rate. He’d only given up 29 through 174 1⁄3 innings. After striking out four over three scoreless innings for Baltimore to start the year, they traded him to the Marlins for a PTBNL, eventually Isaac de Leon.

Bleier appeared in 19 games for the Marlins, ranking fifth on the club. He struck out seven in 13 2⁄3 innings, and allowed six runs (only four earned) on 13 hits and four walks. His 1.24 seasonal WHIP was comparable to his career figure, and Bleier put 65 percent of his 179 offerings in the strike zone. He didn’t have any plate appearances, and handled four fielding chances without an error. He’s currently still on the Marlins 40-man roster.

Left-handed pitcher Raudel Lazo is a native of Pinar del Rio, Cuba. The Marlins signed him in 2011 at the age of 22. Four years later, at the age of 26, he made his major league debut.

Lazo appeared in seven games for the Marlins from September through the end of the season. He struck out five and allowed five hits in 5 2⁄3 innings, walking two, allowing two earned runs, and getting 58 percent of his 96 pitches over the plate. Miami was 2-5 in his appearances. On September 7, he turned in his best performance by whiffing two Brewers in a perfect ninth inning as Milwaukee won, 9-1.

Lazo spent the next two years back in the Marlins minor league system, but never again graduated to the major league level.

Kyle Keller is a six-foot-four right-handed pitcher from New Orleans, Louisiana. In 2015, the Miami Marlins drafted him in the 18th round out of Southeastern Louisiana University.

In August 2019, Keller got the call to join the Marlins at the major league level. He played in 10 games for the team through the rest of the season, totaling 10 2⁄3 innings. He only gave up five hits, but walked eight. Keller surrendered four runs in total and struck out 11 batters. He got 58 percent of his 174 pitches to end over the plate. This past January the Marlins traded Keller to the Los Angeles Angels for Jose Estrada.

Juan Alvarez was initially signed by the California Angels in 1995 after going undrafted. A native of Coral Gables, Florida, Alvarez is a six-foot, 184 lb. left-handed pitcher.

Alvarez made his major league debut with the same team that took a shot on him four seasons into his professional career. He appeared in 19 games over two seasons with the Angels, striking out six batters over nine innings in total. He also walked 11 and gave up 15 hits for 10 runs.

After Alvarez was granted free agency following the 2001 season, he signed on with the Rangers. It would soon afterward represent the bulk of his major league career, as he pitched 39 2⁄3 innings for them over 52 games that year. He struck out 30 and allowed 21 earned runs on 21 hits and 35 walks for a not-as-bad 1.41 WHIP.

Once again without a team going into 2003 Spring Training, the Marlins took a flyer on Alvarez. He played most of the season at the Marlins Triple-A level with the Albuquerque Isotopes, where he pitched in 51 games and went 3-2 with a 5.88 ERA. He spent the month of May back in the major leagues.

In nine games for the Florida Marlins, Alvarez struck out six in 11 2⁄3 innings of work, allowing four runs on eight hits and eight walks. Of his 187 total pitches, 53 percent of them were strikes, and Florida went 4-5 in his appearances.