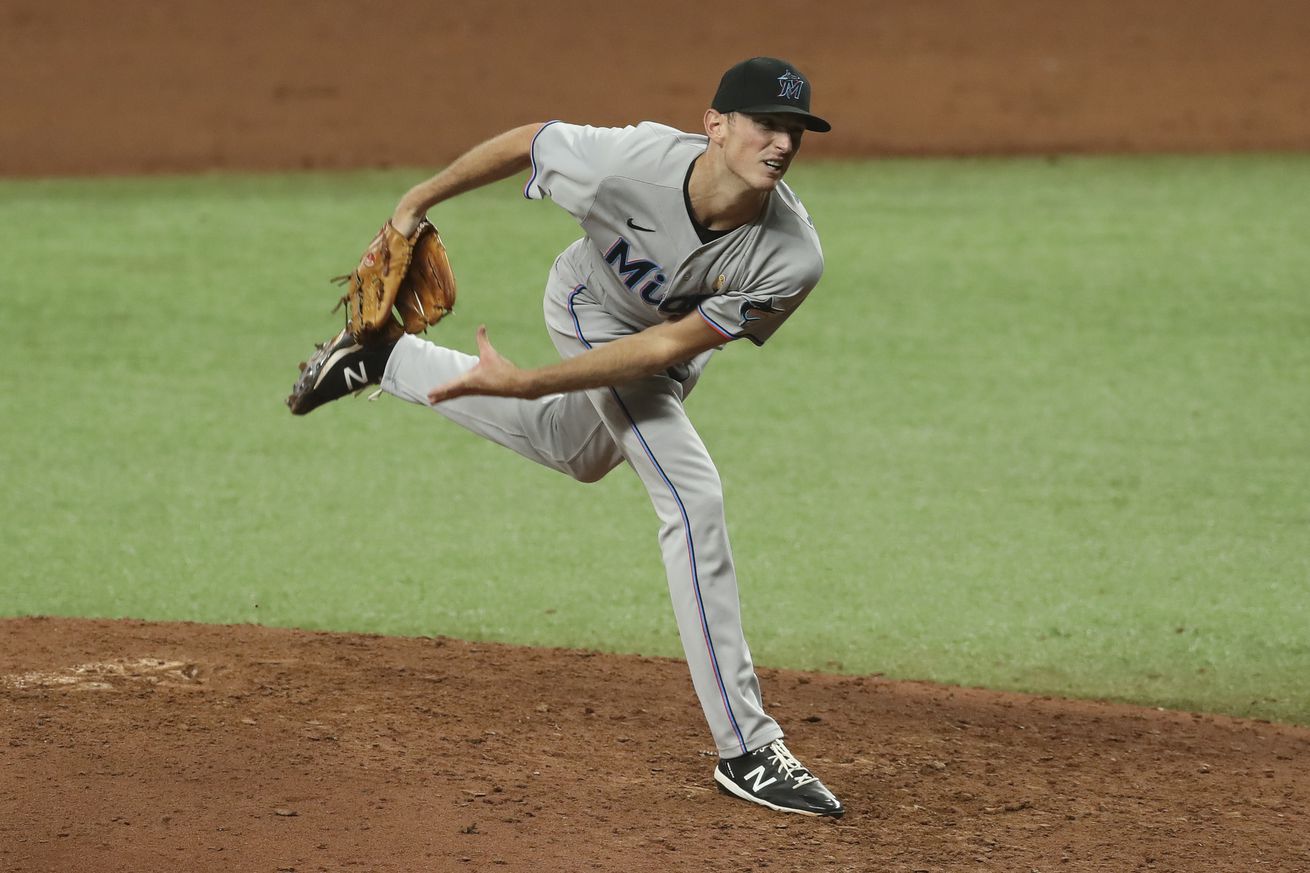 Chapter 29 of our offseason-long series on every player to appear with the Marlins features players from across all eras.

Today’s haul of six players all finished between 20 and 74 plate appearances/batters faced, and they all ended with a positive brWAR.

Nefi Ogando is a six-foot-even right-handed pitcher from Santo Domingo, Dominican Republic. In 2010, he signed his first professional deal with the Boston Red Sox at the age of 21. Midway through his fourth minor league season, Boston traded him to the Philadelphia Phillies for John McDonald. It was with the Phillies for whom Ogando made his major league debut in 2015, when he pitched four innings and allowed nine baserunners for four runs.

Ogando was called up to join the Marlins on three occasions through the 2016 campaign. He played in 14 games, and was totally rocked in one of them. On August 6, he allowed three runs on five hits and two walks over 1 1⁄3 innings.

Aside from that one outing, Ogando allowed seven hits and six walks in 14 1⁄3 innings for a sub-1 WHIP, and struck out a total of eight batters. He plated 60 percent of his 227 offerings in total, and didn’t have a plate appearance. He fielded six chances without an error, making three putouts and three assists. He was worth 0.3 brWAR during his short time with the team. Despite his solid output, the Pittsburgh Pirates claimed him off waivers after the season.

Ogando went on to also play in the minor league system of the Cincinnati Reds, but hasn’t again got back to the majors to date.

Pitcher Franklyn Germán out of San Cristobal, Dominican Republic is a six-foot-seven right-hander. In 1996, the Oakland Athletics signed him through their international free agency program at the age of 16. Exactly six years later, prior to Germán ever getting to the major leagues, the A’s traded him to the Detroit Tigers as part of a three-team deal. Two months later, he made his debut at baseball’s top level.

In parts of four seasons with the Tigers, Germán appeared in 126 games, striking out 93 batters in 125 innings. He posted a 1.78 WHIP and a 4.75 ERA through his Tigers career. At the conclusion of Spring Training in 2006, the Marlins had the opportunity to claim Germán off waivers from Detroit.

Germán joined Florida directly at the major league level after his acquisition, and appeared in 12 of the Marlins first 30 games. He allowed four runs over a dozen innings, allowing only six hits. Unfortunately, he also walked over a batter per inning, racking up 14 in his short stay with the team. Fifty-six percent of his 239 overall offerings wound up over the plate.

Germán did not make a plate appearance with the Marlins, but did handle three fielding chances cleanly. His best performance with the club was likely on April 11, when he struck out two of the three batters he faced in a perfect ninth inning of a 9-3 loss to the San Diego Padres. German was optioned to the minors in mid-May, and Florida released him on August 21.

Carlos Martínez is a right-handed pitcher from Villa Vasquez, Dominican Republic. In 2000, he signed his first professional deal with the Florida Marlins, at the age of 18.

Martínez pitched in the Marlins minor league system for several seasons before making his major league debut. In 2005, he ranked fifth in the Florida State League when he racked up 22 saves for the High-A Jupiter Hammerheads. In 2006, he broke camp with the Marlins.

Martínez pitched in six of Florida’s first 11 games of the year, striking out nine in 6 2⁄3 innings. He only allowed two runs on four hits, but also walked five. He rejoined the club for another half-dozen games in June, pitching 3 2⁄3 scoreless innings.

Most of 2007 would see Martínez mired back in Double-A with the Carolina Mudcats, although he also appeared at three other levels through the season, including in Florida. He allowed four runs in 2 2⁄3 innings over two appearances.

Another two seasons passed before Martínez was recalled up to Florida, but he only appeared in two more games for the Marlins. The bottom line for Martínez was 15 K in 15 1⁄3 innings, a 4.11 ERA, and a 1.63 WHIP. He went 0-for-1 with a strikeout in his only plate appearance, and handled one chance without making an error. Released following the 2009 campaign, Martínez has since not appeared in organized baseball.

Joe Mahoney is a six-foot-six left-handed hitting and throwing first baseman from Albany, New York. In 2007, the Baltimore Orioles took him in the sixth round of the draft out of the University of Richmond. Five years and a million miles later, Mahoney went 0-for-4 in two games with Baltimore in his major league debut.

After the 2012 season, the Marlins claimed Mahoney off waivers from the Orioles. Although he didn’t open the season on Miami’s major league roster, he joined them midway through April and played in nine games in 11 days. He went eight-for-29 with a double and a homer, with two runs scored and four RBI. He didn’t draw any walks and struck out four times. He collected hits in each of his final five games, going seven-for-20 overall. In the field, he converted 47-of-48 chances cleanly, ending with a .979 fielding percentage.

Mahoney was granted free agency following the season, and never again signed any deal with any other club.

Right-handed second baseman Amaury García was signed by the Florida Marlins as a free agent in December, 1992 at the age of 17. He regularly ranked at or near the top of the stolen base leaderboard in whatever circuit he was playing in through his minor league journey. He led the NYPL with 41 stolen bases for the Elmira Pioneers in 1995, ranked sixth in the Midwest League with 37 in 1996 for the Kane County Cougars, third in the Florida State League with 45 for the Brevard County Manatees in 1997, and 10th in the Eastern League with 23 for the Portland Sea Dogs in 1998.

In 1999, García played in 119 games at the Triple-A level for the Calgary Cannons, cracking as many home runs (17) as he had stolen bases. After going 0-for-2 in two games near the All Star break for his major league debut, he appeared in another eight contests for the Marlins through September.

Although the Marlins posted a miserable 1-9 record when García appeared in the game, he wasn’t without his highlights. The only win during that time was also García’s only multi-hit games, when he went two-for-four and scored a run in a 4-0 win over the Montreal Expos on September 21.

Overall, García went six-for-24 with the Marlins, with a triple and a pair of solo home runs. He scored six times and drew three walks, but also whiffed 11 times. Defensively, he made three errors in 44 chances for a .932 fielding percentage in 55 innings of field-work. After spending the entire 2000 season back in the minors, the Marlins traded García to the Chicago White Sox for Mike Roberts. García wouldn’t appear again in the majors, although he did play four successful seasons in the Mexican League, generally considered a Triple-A level adjacent organization.

Brandon Leibrandt is a left-handed pitcher from Alpharetta, Georgia. In 2014, he was the sixth round pick of the Philadelphia Phillies out of Florida State University.

Son of 14-season major league veteran Charlie Leibrandt, Brandon made the Freshman All-American First Team for the Seminoles after going 8-3 with a 2.82 ERA through 19 starts. He racked up a 1.22 WHIP through three Division 1 NCAA seasons.

Leibrandt, the younger, worked his way up through the Phillies system until 2018, playing two seasons at the Triple-A level with the Lehigh Valley IronPigs. After not appearing at any level in 2019, the Phillies released him at the end of May, still two months prior to the belated start to the 2020 campaign.

Decimated by COVID-19 early on in the late-starting 2020 season, the Marlins plucked Leibrandt out of free agency on August 10. On August 23, he made his major league debut for Miami, holding the Nationals to one hit and one walk over four innings in a 9-3 loss to Washington.

Leibrandt only pitched nine innings for the Marlins (so far), and did give up seven walks. Other than that daunting BB rate, he only gave up three hits to land on a solid 1.11 WHIP. He put 61 percent of his 150 pitches over the plate. On September 7, he was put on the 10-day injured list, and was later outright to the minors and granted free agency on November 2.