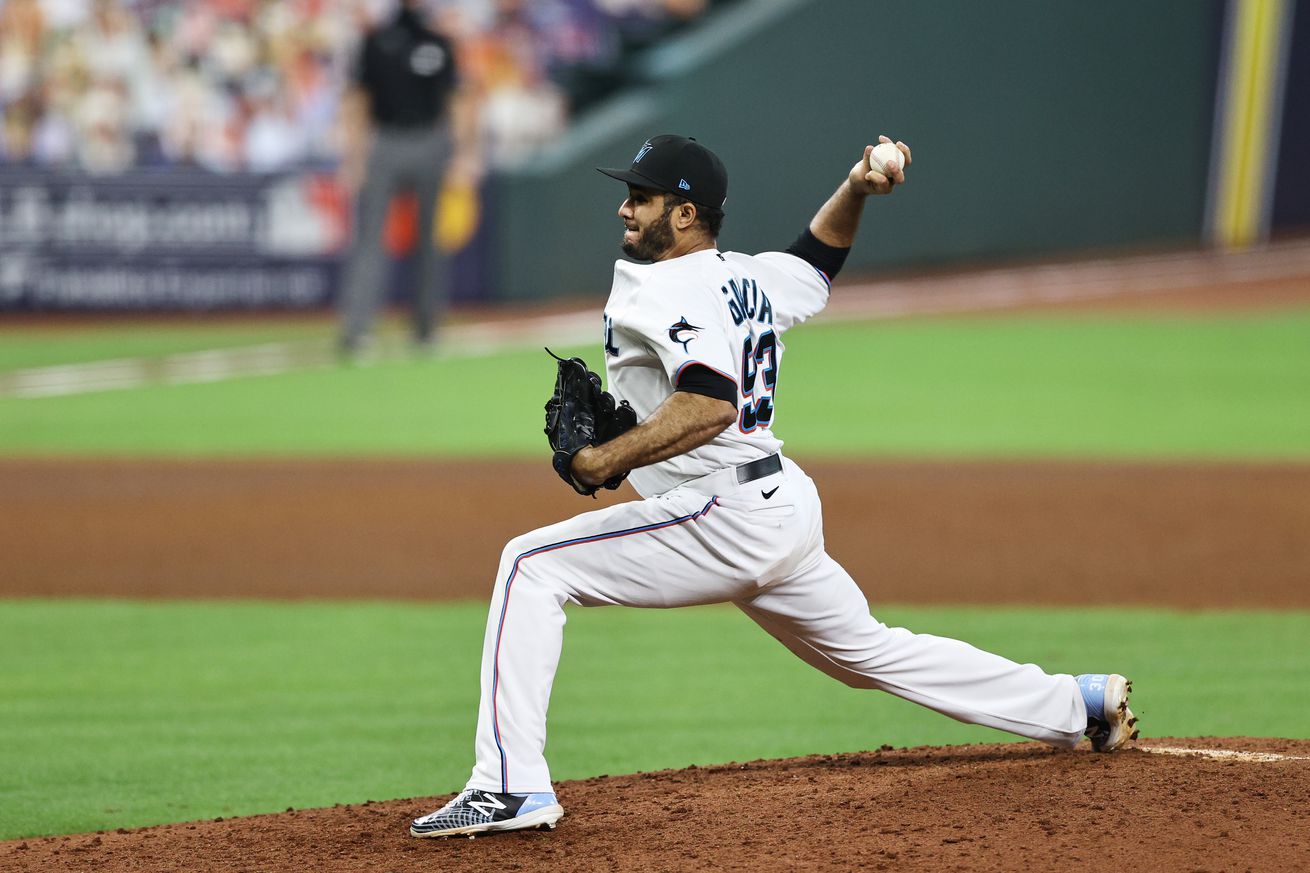 Chapter 30 features the top rung of the ladder of players to collect between 20 and 74 plate appearances/batters faced.

Chapter 30 of the off-season-long every-Marlins countdown features the very best of the players who totaled between 20 and 74 batters faced/plate appearances.

Although the term, “very best” is speculative, these six players had the highest brWAR of all Marlins to collect the aforementioned total of game transactions, excepting the first on the list.

Marcos Carvajal is a right-handed pitcher from Cuidad Bolivar, Venezuela. In 2000, he signed his first professional deal with the Los Angeles Dodgers at the age of 16. In 2004, they lost him to the Milwaukee Brewers in the rule 5 draft, and was immediately purchased by the Colorado Rockies.

Carvajal made his major league debut with Colorado in 2005, where he ranked as the third youngest player in the National League. He came into 39 games in relief, going 0-2 with a 5.09 ERA. In 53 innings of work, he struck out 47 and clocked a 1.377 WHIP. After the season, the Rockies traded him to the Seattle Mariners for Yorvit Torrealba. Prior to the start of the following season, he was again traded, from Seattle to the Tampa Bay Devil Rays for Jose De La Cruz.

After a season for the Rays in the minors, Carvajal was taken off waivers by the New York Mets. Without having reemerged in the majors, he was again placed on waivers in September, 2007, where the Marlins claimed him.

Carvajal appeared in three games for the Marlins that month, allowing eight hits and a pair of walks in four innings. He surrendered four runs (three earned), and committed one error in two fielding chances. The Marlins released him in July, 2008.

Francisco Cervelli is a six-foot-even, 220 lb. right-handed catcher from Valencia, Venezuela. Born on March 6, 1986, Cervelli signed a deal to play ball for the New York Yankees just prior to his 17th birthday in 2003.

Cervelli worked his way up through the Bombers’ system until making his major league debut in 2008. In seven seasons as the Yankees backup catcher, he appeared in 250 games and slashed out a respectable .278/.348/.381 line with 10 homers and 92 RBI. After the 2014 campaign, New York traded Cervelli to the Pittsburgh Pirates for Justin Wilson.

Although Cervelli had played mostly as a backup through his time in New York, he inherited the starting role in Steel Town. He played four-and-a-half seasons for the Bucs, and hit .264/.362/.374 in 450 contests. He socked 26 taters and added 194 RBI to his career totals. The Pirates waived him on August 22, 2019, and the Atlanta Braves signed him two days later. He only played in 14 games for them, hitting .281.

A free agent once more following the season, the Marlins signed Cervelli on January 9. He was to be the Marlins backup catcher, spelling Jorge Alfaro, but was pressed into starting duty when COVID-19 struck the team. Cervelli went 13-for-53 from the plate, with two doubles, three homers, and seven RBI. He drew eight walks versus 14 strikeouts, and even stole a base. Defensively, he put up a .992 fielding percentage with one error in 130 1⁄3 innings behind the plate, but threw out none of the five runners attempting a stolen base against him.

On August 7, Cervelli was the big hero of a 4-3 Marlins victory against the Mets. In his first plate appearance of the game, he hit a three-run homer to provide most of the Marlins offense. Unfortunately, Cervelli sustained a concussion in his final appearance, and eventually decided to retire from active play.

Although Cervelli’s time with the Marlins was short, his brWAR per plate appearance was higher even than that of the number one player on our list. You’ll have to tune in to find out who that was, but I think you could probably guess his name.

Prior to his time with the Dodgers, Hernández started his professional career in 2009, after getting drafted in the sixth round by the Houston Astros. A San Juan, Puerto Rico native, Hernández has made a career of appearing at any position needed. In 2014, he made his major league debut with the Astros, for whom he hit .284 in 24 contests. On July 31, they traded him with Austin Wates and Jarred Cosart to the Marlins for Jake Marisnick, Francis Marte, Colin Moran, and a late-first round draft pick.

Hernández played in 18 contests for the Marlins, and went 7-for-40 from the plate with two doubles, a triple, and two home runs for eight RBI. He drew four walks and struck out 10 times. Defensively, he appeared in left field, right field, second base, and third base. In a total of 100 2⁄3 innings combined, he made no errors. After the season, Miami sent him to the Dodgers with Austin Barnes, Chris Hatcher, and Andrew Heaney for Dee Strange-Gordon, Dan Haren, and Miguel Rojas.

Boise, Idaho native James Hoyt is a six-foot-six right-handed pitcher. In 2012, he signed his first professional deal to play for the Atlanta Braves at the age of 26. Four years later, he debuted at the major league level with the Houston Astros, and appeared in 66 contests for them out of the bullpen over the next three seasons. In 71 2⁄3 frames, he was 2-1 with a 4.40 ERA and a 1.28 WHIP.

After the 2018 campaign came to a close, Hoyt was granted free agency. His free agent status lasted exactly one day, and he signed on with the Cleveland Indians on December 1. He spent most of 2019 at the Triple-A level with the Columbus Clippers. He also racked up a 2.16 ERA over 8 1⁄3 major league innings with the Tribe.

Hoyt was resigned by the Indians after the season. The belated start to the 2020 season, paired with the COVID-19 problems in Miami necessitated unconventional methods by which to stock the team, especially the bullpen. The Marlins purchased Hoyt’s contract from Cleveland on August 1.

Hoyt was rock solid for the Fish out of the pen, tying for the team lead with 24 appearances through the season. He went 2-0 with a microscopic 1.23 ERA over 14 2⁄3 innings, allowing just nine hits and eight walks for a 1.159 WHIP. Hoyt struck out 20 for a 12.3 K/9 rate to rank second on the team out of the players to pitch more than four innings. He pitched one inning in the postseason, allowing a solo home run in game one.

Hoyt held the opposition scoreless through his final 19 appearances, striking out 14 in 11 innings and giving up only five hits. He is presently still on the Marlins active 40-man roster.

Right-handed pitcher Yimi García started his pro career in 2009 at the age of 18 after signing with the Los Angeles Dodgers. A native of Moca, Dominican Republic, García made his big league debut with the Dodgers in 2014.

García is still on Miami’s 40-man roster, and is due to become a free agent following the 2021 season.

Waco, Texas native Arthur Rhodes was a second round choice of the Baltimore Orioles in 1988 out of La Vega HS. A left-handed pitcher, Rhodes transitioned from starter to reliever after going 15-19 with a 5.56 ERA through 50 starts with the Orange Birds to start his career. The splits are telling in that he totaled 6.6 K/9 through the four seasons from his debut in 1991 through 1994, and his post-1994 K/9 turned out to be 9.4 over his final 16 seasons.

Never considered a team “closer,” Rhodes nevertheless collected 33 over the course of his career, including a career-best nine for the Oakland Athletics in 2004. Prior to the Marlins’ leg of his journey, he also played for the Seattle Mariners, the Cleveland Indians, and the Philadelphia Phillies.

At the 2008 trade deadline, the Mariners traded Rhodes to the Marlins for Gaby Hernandez, a prospect who never reached the major league level. Rhodes was only a part of the Marlins organization through the end of that season.

In 25 appearances for Florida, Rhodes went 2-0 with one save and a 0.68 ERA over 13 1⁄3 innings of work. He struck out 14 while walking only three, including two intentional walks. He didn’t give up a home run and limited the opposition to only one run in total, landing with a 1.05 WHIP. Opponents slashed just .220/.264/.260 through 54 plate appearances. Of his 211 pitches thrown for the Marlins, Rhodes landed an incredible 67 percent of them in the strike zone.

After his time with the Marlins, Rhodes played for the Cincinnati Reds, the Texas Rangers, and the St. Louis Cardinals, making his first all-star appearance in his penultimate season at the age of 40.