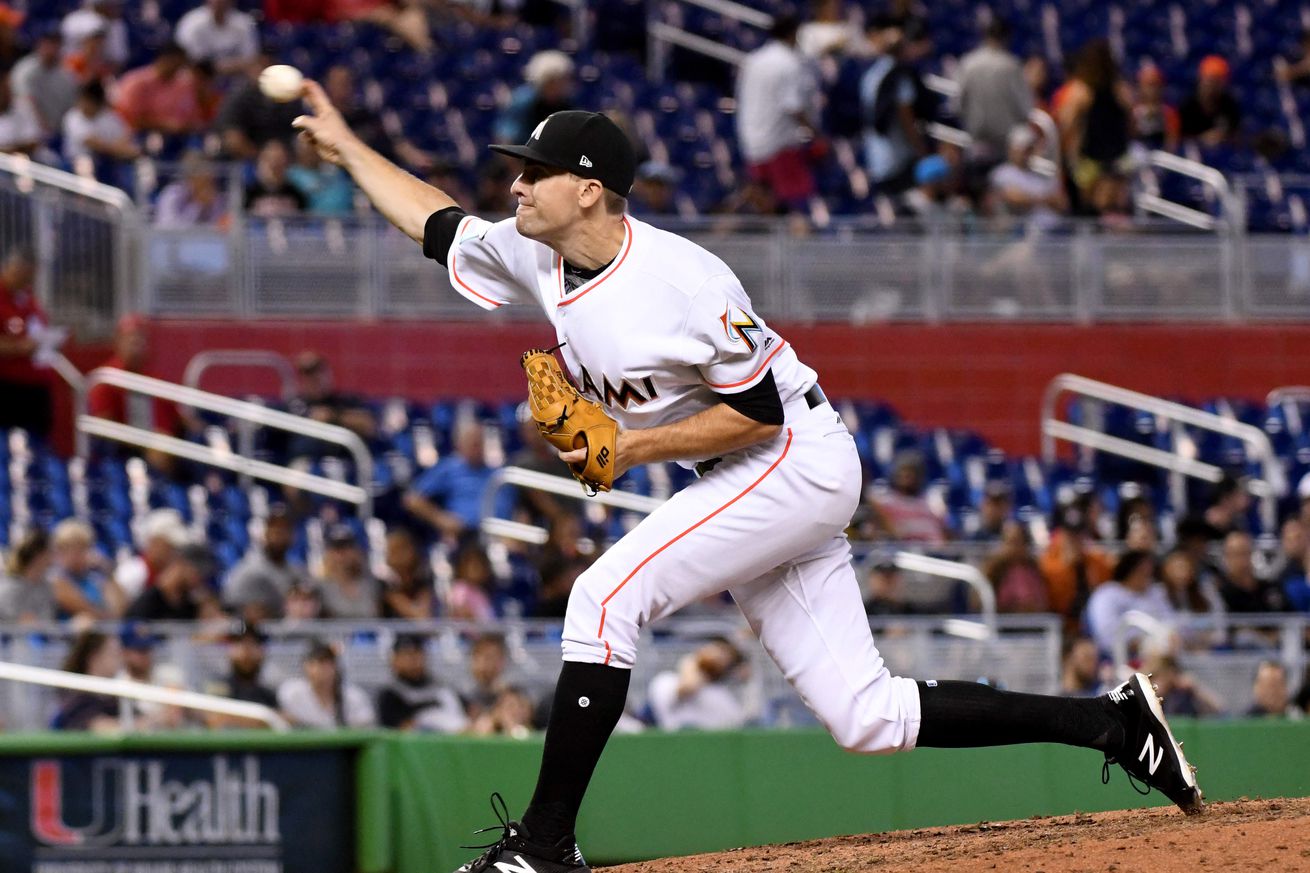 Chapter 31 of our offseason-long, 165 part series features the first six players between 75 and 249 plate appearances/batters faced. Each of the six players featured in today’s article finished well below replacement level (per brWAR).

Hayden Penn was a six-foot-three right-handed pitcher from La Jolla, California. In 2002, the Baltimore Orioles took him in the fifth round of the draft.

Penn made his major league debut with the Birds in 2005, and started 14 games for them over the next two seasons. He put up a 9.31 ERA and a 2.03 WHIP through 58 innings of work, not really a particularly small sample size. After spending 2007 and 2008 entirely in Baltimore’s minor league system, the Orioles traded him to the Marlins for Robert Andino.

Despite Penn’s questionable output at the major league level, he opened the 2009 campaign on the Marlins active roster, and pitched in 16 of Florida’s first 54 games of the season. His best appearance with the team was on April 15, when he earned the victory after pitching 1 1⁄3 perfect innings, including one strikeout.

The bottom line wasn’t as rosy for Penn. Although his strikeout rate was nearly triple that of his time with Baltimore, with 27 in 22 innings, he also walked 20 and gave up 30 hits for a 2.27 WHIP, along with a 7.77 ERA. Penn only introduced 57 percent of his 490 Marlins pitches to the strike zone. He went 0-for-2 at the plate, although he did draw a walk, and made two fielding assists without an error. He spent the rest of the season at the Marlins Triple-A affiliate, the New Orleans Zephyrs.

The Pittsburgh Pirates claimed Penn off waivers from the Marlins after 2010 Spring Training, but Penn only pitched another 2 2⁄3 major league innings.

Abraham Núñez was a switch-hitting outfielder from Bajos de Haina, Dominican Republic when he signed his first professional deal. That was in 1996 by the Arizona Diamondbacks when Núñez was 19 years old. Three years later, the Snakes sent Núñez to the Marlins to complete an earlier trade for Matt Mantei.

Núñez opened the 2000 season ranked as the number 30 prospect in baseball, according to Baseball America. By 2002, he was no longer ranked in the MLB’s top 100, but he put it all together while playing for the Triple-A Calgary Cannons. In 129 games he slashed .250/.329/.477 with 21 home runs and 60 RBI. In September, he made his major league debut with the Marlins and went two-for-17 in 19 games. Both of those hits came on September 20, in a 6-2 Marlins victory against the Atlanta Braves.

After spending his entire age-26 season in the Marlins minors, he finally got back to the majors with them as part of the Opening Day roster in 2004. He played in 58 of Florida’s first 102 games of the season, collecting 11 hits in 75 plate appearances. He hit a double, a triple, and a homer, driving in five and cooling nine runs. He drew nine walks and struck out 21 times, stealing one base in three attempts. Defensively, he made zero errors in 229 1⁄3 innings in the outfield, mostly in left field. The Marlins traded him to the Kansas City Royals at the deadline for Rudy Seanez.

Núñez hit .226 in 59 games to close out the season with the Royals, but didn’t make any appearances at the major league level after that.

Right-handed pitcher Justin Speier was a 55th round pick in 1995 by the Chicago Cubs. A native of Daly City, California, Speier was taken out of Nicholls State University.

Speier’s father Chris was a three-time All Star at shortstop and a 19-season major league veteran between five teams. Justin eventually played a dozen seasons in the major leagues. After pitching 1 1⁄3 innings in his debut with the Cubs in 1998, Chicago traded him to Florida with Todd Noel and Kevin Orie for Steve Hoff and Felix Heredia at the deadline.

Speier’s tour of duty with the Marlins was short, only 18 games long. All of his appearances were out of the bullpen, as Speier allowed 18 earned runs in 19 1⁄3 innings, on 25 hits and 12 walks for a 1.91 WHIP. Seven of the 25 hits were home runs, although Speier did manage to strike out 15. He finished with an 8.38 ERA. The Marlins kept Speier on the roster through the offseason and 1999 Spring Training, but sent him to the Atlanta Braves for minor leaguer Matt Targac on April 1.

Speier later also played for the Cleveland Indians, the Colorado Rockies, the Toronto Blue Jays, and the Los Angeles Angels, racking up a 35-33 career record with a 4.11 ERA in 613 appearances.

Ben Meyer is a six-foot-six lefty-hitting righty-pitching native of Minneapolis, Minnesota. The Miami Marlins spent their 29th round pick on him back in 2015. In four seasons of Division 1 play for the Golden Gophers, Meyer was 20-27 with a 4.01 ERA through 118 appearances, including 51 starts.

After joining the Marlins system, Meyer worked his way up through their minor league system for the next four seasons, skipping the Double-A level. As a part of the starting rotation for the New Orleans Baby Cakes in 2018, he started in 11 of his 15 appearances and went 5-4 with a 4.24 ERA. In June, the Marlins called him up to the majors for the first time.

Meyer worked out of the pen for Miami, appearing in 13 of the Marlins final 101 contests. In 19 innings of work, he allowed a 10.42 ERA on 23 hits and 14 walks. He struck out nine batters, plating 60 percent of his 369 offerings in the process. His best showing in a Marlins victory was on July 15, when he struck out two in a perfect ninth inning as Miami defeated the Philadelphia Phillies by a 10-5 final score.

Meyer was released from the Marlins system outright in June 2019. The Colorado Rockies signed him, and he’s spent the interim in their minor league system.

Right-handed pitcher Óscar Henriquez is a six-foot-six native of La Guaira, Venezuela. Born in 1974, he signed his first professional deal with the Houston Astros at the age of 17.

It took parts of seven seasons, but Henriquez rose through the Astros system to make his major league debut in 1997. He walked three and allowed a pair of runs on two hits over four innings, but the ‘stros flipped him along with Manuel Barrios and Mark Johnson for Moises Alou after the season in a deal with the Marlins.

Henriquez opened the 1998 campaign as part of the Marlins Opening Day roster, and played in nine of Miami’s first 19 contests. In total, he played in 15 games for the team, contests in which the Marlins put up a nearly incomprehensible 0-15 record. Henriquez allowed 22 runs in 20 innings, 19 of them earned for an 8.55 ERA. He struck out 19 and gave up 26 hits (including four homers) and a dozen walks. Out of 373 total pitches for Miami, Henriquez put 59 percent over the plate. He was 0-for-1 from the plate, and did not have a fielding chance.

After the close of the 1998 campaign, the Marlins traded Henriquez to the New York Mets for Jorge Fabregas. Henriquez bounced around the minors for a few seasons after, before finally reemerging in the majors in 2002 with the Detroit Tigers. He put up a 4.50 ERA over 28 innings, and saved a pair of games while posting a respectable 1.214 WHIP.

Matias Carrillo was a 22-year-old outfielder for Poza Rica in the Mexican League in 1985 when the Pittsburgh Pirates purchased his contract and began his stateside career. A five-foot-11 left-hander, Carrillo is a native of Los Mochis, Mexico. Two seasons later, the Milwaukee Brewers took Carrillo in something called the “minor league draft,” which I can only imagine is a precursor to our current system, the rule 5 draft.

Carrillo did make his major league debut for the Brewers in 1991, but did not get any plate appearances. He did appear in three games defensively for them in left field. After the 1993 season was spent with the Mexico City Tigers, the Marlins purchased his contract.

Carrillo appeared in 24 of Florida’s final 31 games of their inaugural campaign. He went 14-for-55 with six doubles, four runs scored, and three RBI. He drew one walk and struck out seven times. His most impactful game was on September 5 in a 4-3 win over the Los Angeles Dodgers, when he drove in Jeff Conine with an eighth-inning single to tie the game at three.

In 1994, Carrillo appeared in another 80 contests for the Marlins, hitting .250 with seven doubles and nine RBI. On June 28, he led off the ninth inning of a tie game with the Phillies with a double, and scored the eventual game-winner on a Jerry Browne sacrifice fly two batters later.

In 76 total chances in the outfield, Carrillo made one error to close his Florida career with a .987 fielding percentage. The Marlins granted his free agency following the season. He did not get back to the major leagues again.