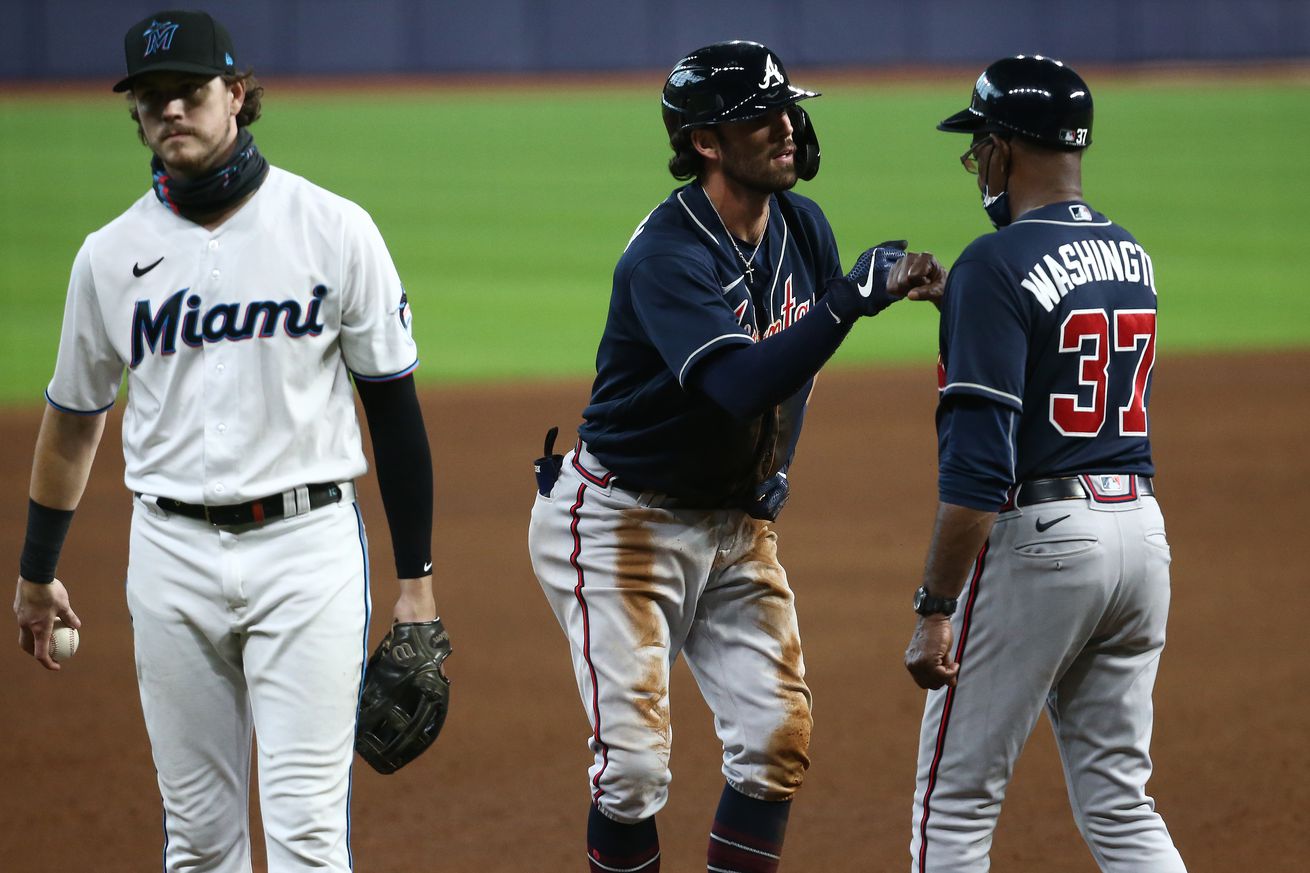 The Marlins were outscored 18-5 during the series, but can still reflect fondly on a competitive 2020 campaign.

The magical 2020 run has come to an end for the Miami Marlins. Quite literally, nothing was working for the Fish in their 7-0 loss to the Atlanta Braves. The Braves swept the Marlins in three games, handing Miami their first postseason series loss in franchise history.

Although Marlins starting pitcher Sixto Sánchez began the afternoon with a five-pitch first inning, he found himself in trouble shortly thereafter. He allowed a single and two walks to load the bases to start the second inning. With zero outs, the Braves looked like they were ready to break open the game. But after Sánchez struck out Adam Duvall, left fielder Corey Dickerson made a diving catch on a ball hit by Nick Markakis. That catch kept at least one run on the board.

“I thought at first, ‘this cat is going to be lights-out today,’” Marlins manager Don Mattingly said about Sánchez. “But then in the next inning it seemed like he backed off a little bit and wasn’t as aggressive.”

Sánchez and the Marlins were able to get out of the second, but that’s where their luck ran out. Sánchez allowed a walk to Ronald Acuña Jr., and then three more base hits before recording an out. Travis d’Arnaud continued his dominance over Miami with a two-RBI double to cap off a four-run inning for Atlanta. d’Arnaud was 6-for-10 with two home runs and seven RBI against Miami in the NLDS.

“It was the walks,” Sánchez said. “The walks were what got me in trouble. I wasn’t able to execute my pitches, and (Atlanta) took advantage of that.”

Sixto Sánchez’s day was brief and largely ineffective. He was relieved by rookie Trevor Rogers in the fourth, but Rogers couldn’t find success against a Braves lineup that has had Miami’s number all season long. He gave up another three runs, two of which were earned.

But none of that extra offense was needed by Atlanta. Miami was shut out once again, just like they were in game two of the series. After scoring in the eighth inning of game one, the Braves’ pitching staff held the Marlins scoreless over the last 19 innings of the series.

What very few chances the Marlins had, they were unable to capitalize on. They went 0-for-9 with runners in scoring position on Thursday. They went 0-for-14 in that department over their last two shutout losses.

Despite the disappointing end for Miami, they defied expectations simply by appearing in the NLDS. In a season that began with 18 players in quarantine due to positive COVID-19 tests, the Marlins were able to get back to the playoffs for the first time in 17 years, with the help of over a dozen rookies making their MLB debuts.

“At the end of the day, this is just the beginning,” said Marlins shortstop and de-facto captain Miguel Rojas. “I feel like this organization, the things we’re going to do here, are going to be sustainable for a long time. I’m so happy and proud to be part of this group.”

“I’m proud of being part of this organization.”

On top of the promising rookie campaigns by Miami’s top pitching prospect Sixto Sánchez and infielder Jazz Chisholm, the Marlins still have more prospects down in the minor leagues that will likely make their MLB debuts some time in 2021.

“There’s still guys coming,” Mattingly said. “You talk about the JJ Bledays of the world and (Jerar) Encarnación. There’s other cats coming too. So that’s what I’m saying, there’s going to be a lot of competition.”

While the future is bright for the prospects, the Marlins also have complicated decisions to make on a couple of veterans. First baseman Jesús Aguilar is due a substantial raise in arbitration if tendered a contract while closer Brandon Kintzler awaits news on whether the club will pick up his $4 million option for the 2021 season.

“The window’s just opening for this team…Hopefully they can take advantage of it,” said the 36-year old Kintzler. “If my option’s picked up, it’s going to be a short offseason.”