The Brewers and Marlins have agreed to a swap sending right-handed reliever John Curtiss from Miami to Milwaukee in exchange for minor league catcher Payton Henry, the teams announced just prior to Friday’s trade deadline. 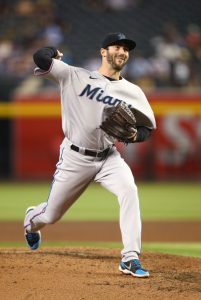 Curtiss, 28, was at one point a fairly well-regarded bullpen prospect in the Twins system but never panned out in Minnesota, Anaheim or Philadelphia after bouncing around in a series of transactions. Like so many others, however, he found a home with the Rays in 2020, pitching to a brilliant 1.80 ERA in 25 innings of relief and posting a 25.3 percent strikeout rate against a masterful 3.0 percent walk rate. The Rays nevertheless flipped Curtiss to the Marlins in a late offseason trade for minor league first baseman Evan Edwards — perhaps not sold on Curtiss being able to sustain his otherworldly command.

While Curtiss’ command has indeed backed up a bit — sustaining a three percent walk rate is a near impossibility for any pitcher — it’s still sitting at a brilliant 5.6 percent so far in what has been a terrific 2021 season. Curtiss pitched 40 innings for the Marlins and notched a tidy 2.48 ERA with a solid 24.8 percent strikeout rate.

Beyond his excellent production, Curtiss was no doubt appealing to the Rays due to the fact that he’s not yet arbitration-eligible and is controlled through the 2025 season. Curtiss won’t even reach arbitration until the 2022-23 offseason, so there’s potential for him to step up as a long-term bullpen piece for the Brew Crew.

The Brewers will gain those four and a half years of control at the expense of the 24-year-old Henry, whom they selected in the sixth round of the 2016 draft. Henry ranked among the Brewers’ top 30 prospects at Baseball America each season from 2018-20 but fell off this year. He’s still 25th among their farmhands over at FanGraphs, where Eric Longenhagen notes that he was a bat-first catcher in the draft who has made enough defensive gains to stick behind the plate. Henry’s raw power is his best tool.

So far in 2021, however, that pop hasn’t really been on display. He’s batted a combined .297/.372/.390 with just two homers between Double-A and Triple-A. That said, Henry has curbed his once-problematic strikeout rates by a wide margin this year; he fanned in 32 percent of his trips to the plate in Class-A as recently as 2018, but he’s down to an even 25 percent between Double-A and Triple-A this year (with fewer punchouts in Triple-A).

The Marlins are known to have been looking for potential long-term options behind the dish, and while Henry is a long shot to step up as their everyday option back there, he gives the Fish an upper-minors option who is producing at the dish and may not be too far from getting a shot in the big leagues.