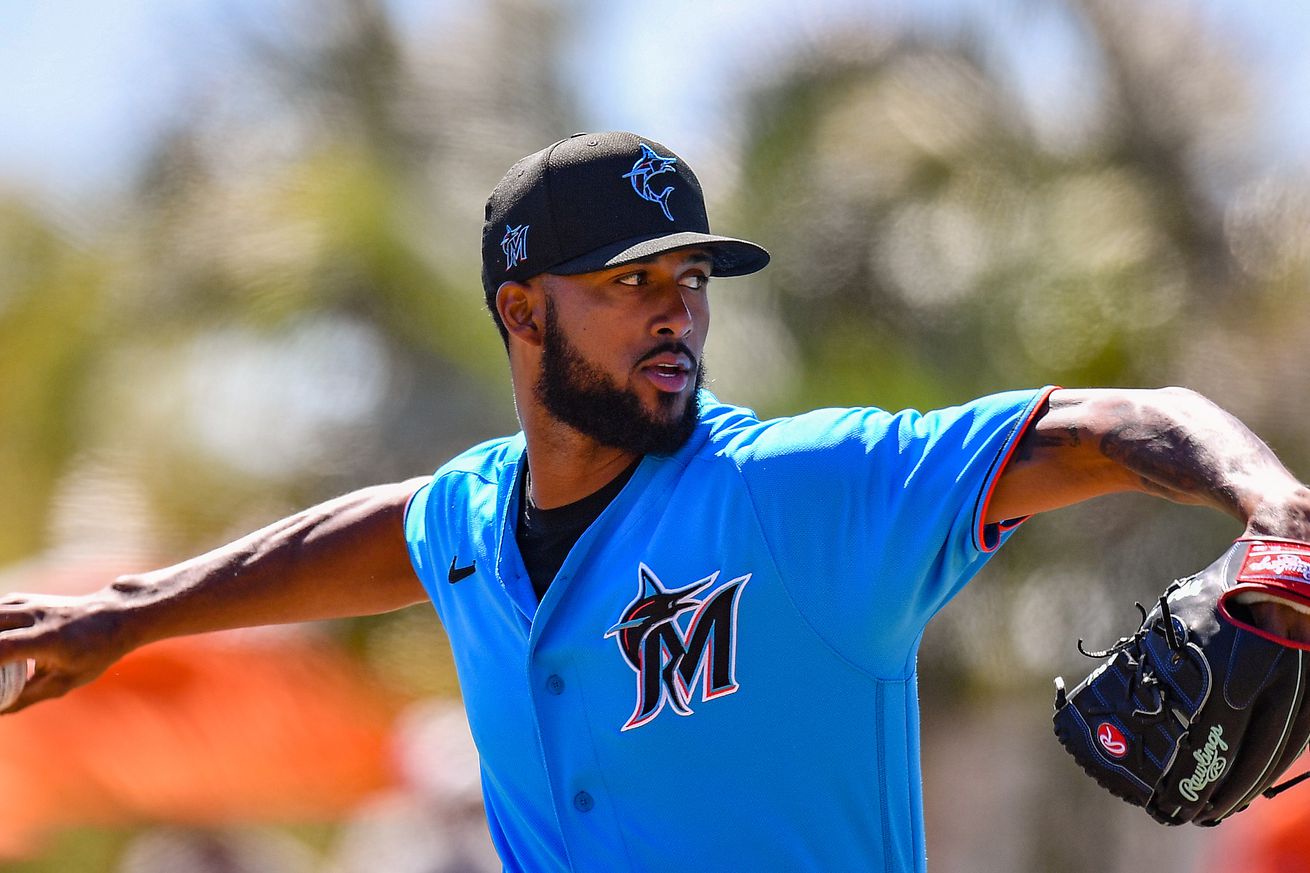 After taking a look at the position players with the best attributes last week, it is now time to check out the organization’s best arms. Just to give you a warning, there are plenty to choose from. As if their pitching depth wasn’t enviable enough already, the Marlins used all their picks to reinforce the position during the 2020 MLB Draft.

For a rebuilding team, the Marlins rotation was solid enough last year, as their ERA was middle of the pack in the MLB. Sandy Alcantara made impressive strides in 2019, showing the dominance we all expected when he initially joined the organization. Pablo López and Caleb Smith have also been decent for the Fish, but they must take the next step towards consistency fairly quickly before some pitching prospects start knocking on the door. Sooner rather than later, Sixto Sanchez and Edward Cabrera will be making their major league debuts, and the competition for a starting job will be much more intense.

The real strength of the Marlins farm is in their pitching depth, and in this article we will take a look at the best pitching attributes in the organization. Scouts utilize the 20-80 grade scale for different pitches, control, and command, while analysts look for different aspects in addition to the ones scouts provide, such as ground-ball production, hard-hit rate, as well as others.

The Marlins No. 1 prospect in the organization had an incredible 2019, as he posted a 2.76 ERA in 114 IP in High-A and AA. His fastball ranges from 95-99 MPH, and his two-seamer has major vertical movement, while his four-seamer reaches triple digits. MLB Pipeline gave Sixto Sánchez a 70-grade fastball, tying him with four other Marlins prospects. No wrong answer here!

“With the third pick of the 2020 MLB draft, the Miami Marlins select Max Meyer” is a sentence that changed Meyer’s life for good. Besides Edward Cabrera, no one else from the right side really has a devastating slider in the organization. Meyer and his 70-grade breaking ball is here to change that.

So the Marlins pick, Max Meyer, has a pretty sick slider pic.twitter.com/czABrCTB9C

And, oh yeah, this one too:

With such a great fastball/slider combination and a bit more development on his other pitches, Meyer will be up there with Sixto and Edward fighting for the top spot in the Marlins rotation very soon.

Changeup specialist Trevor Richards was the natural choice here before the Marlins traded him to the Tampa Bays Rays during the 2019 season. Receiving Jesús Sánchez in return for him hopefully makes it worth it. Besides, this organization has no shortage of devastating offspeed offerings.

In 31 starts across two years in the majors, Pablo López hasn’t shown the overall results we expected, but his changeup is the one pitch that is considered way above MLB average. If López had pitched enough innings last season, he would have ranked in the top 20 most effective changeups in the majors, per FanGraphs. Just take a look at how his changeup and fastball complement one another:

The location, the horizontal break, the deception…there’s a lot to like about the Venezuelan right-hander.

Even though there are many Marlins prospects with promising changeups of their own, Pablo has proved that his can be effective in the majors. That is why he has the best changeup in the organization until Sanchez/Cabrera/Neidert prove me wrong.

It looks like Yams agrees with me on this one:

Braxton Garrett had one of the best curveballs in the 2016 MLB Draft class. He had a grade of 60 on that signature pitch on his scouting report, which was tied for first in the farm system until Zach McCambley (65 grade) was selected in the most recent draft class.

Only one qualified pitcher in the entire organization had a BB/9 below a 2.00 during the 2019 season: Sixto Sánchez at 1.73.

What makes Sánchez one of the best prospects in baseball is the full package of his pure, filthy stuff and his control. In this era, where high velocities and great spin rates rule the art of pitching, some may forget how important it is to throw your pitches where you want to throw them.

Two hard throwing sinker-ballers, José and Sandy, have produced a lot of grounders throughout their careers. Last year, Alcantara was one of only three starters in the majors to have at least 16 GIDP before the All-Star break, a big reason why he was selected to his first Midsummer Classic. Fittingly, the young right-hander completed a scoreless inning during the big game thanks to a clutch 6-4-3.

Relievers also have attributes to admire! Alex Vesia is coming off an incredible 2019 season, where he struck out 100 hitters in 66.2 IP and ended the season on an unfathomable scoreless streak. He was also having a perfect spring training before, you know, everything stopped:

Another clean frame for #Marlins‘ No. 27 prospect Alex Vesia. He’s now posted 5 straight perfect innings and after not allowing a run in his last 35 IP in 2019 (including the AFL), he hasn’t allowed one in 6 this spring.

As soon as baseball is back, I expect him to be at the back end of the big league bullpen.

Combine all of these putaway pitches with good pitching fundamentals, you’d get the most consistent hurler the Marlins have ever seen. While that might not be realistic, it’s a reminder that with a good organizational culture where players trust and genuinely root for each other’s success, these guys can hopefully pick up best practices from their teammates, forming a deep and dynamic pitching staff for years to come.