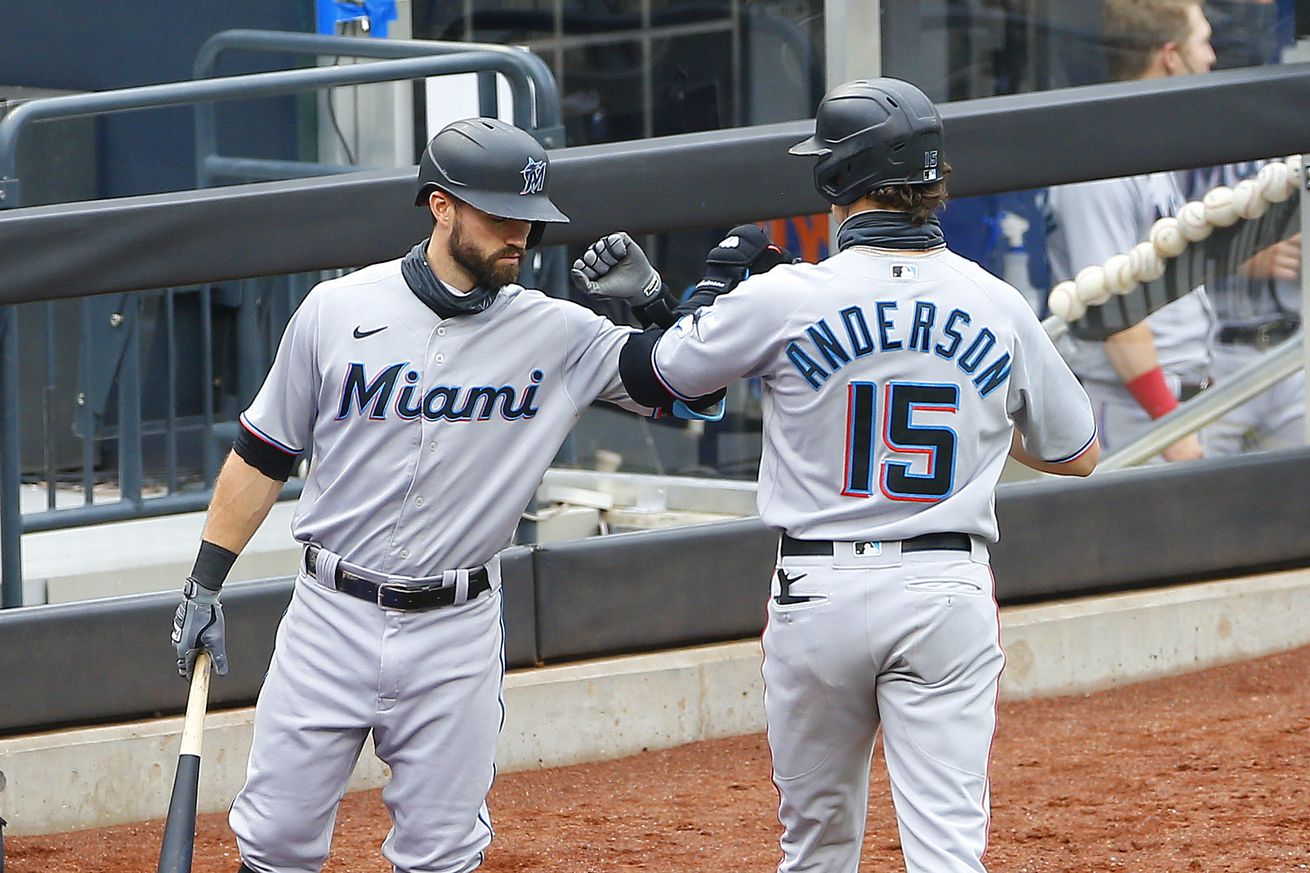 With only a couple hours to spare, the Marlins pulled the trigger on an exciting outfield upgrade and another trade that could yield big long-term benefits.

The Miami Marlins’ 5-3 win over the New York Mets was just the beginning of an eventful day from the Fish.

Sitting at 14-15 coming into Monday, it wasn’t clear whether the Marlins would be trade deadline buyers or sellers. Many people around Miami predicted it would be a mixture of both, with the Marlins perhaps giving up prospects and MLB talent only in the event that they could acquire a player with multiple years of team control. They made a couple of big additions to their lineup that has sputtered a bit in the last couple of weeks.

The biggest trade Miami made was the acquisition of outfielder Starling Marte. The Marlins had to give up pitchers Caleb Smith and Humberto Mejía, as well as a player to be named later (Class-A LHP Julio Frias).

After starting the season looking like the best offense in baseball, the Marlins have fallen back down to Earth. The Marlins are near the bottom of the league in runs scored and have only hit 11 home runs since August 17.

With the addition of Starling Marte, the Fish are getting a middle-of-the-order hitter that can support Brian Anderson and Corey Dickerson. Coming in with a .311/.384/.443 slash line, he instantly becomes one of Miami’s better hitters. There are currently no qualified players in the starting lineup that have higher than a .300 batting average (Miguel Rojas has a .349 average but only has 43 at-bats).

One factor that made Marte especially appealing to the Marlins was his contract. Unlike most veterans on the trade block, he remains under club control through 2021, assuming Miami picks up his $12.5 million option after this season. Marlins president of baseball operations Michael Hill indicated that they absolutely will.

“I don’t think you give up what we just gave up if it’s just a 30-day rental,” Hill said. “We feel, as our starting pitching continues to improve and return from the injured list, that we could put our starting pitching against anyone in the league. And we just wanted to fortify our offense and give ourselves every opportunity to score runs and to win games.”

The Marlins had to give up Caleb Smith, who had his share of success with the Marlins. But with an influx of pitching at all levels of the organization, the Marlins felt they could afford to ship him off. The successful arrivals of Sixto Sánchez and Trevor Rogers have also proven that the Marlins are deep enough in the pitching department.

The Marlins also shipped off Humberto Mejía, who had a 5.40 ERA in three appearances when pressed into emergency starting duty. He never pitched more than four innings at a time, and the jury’s still out regarding whether he’s capable of sticking in a major league rotation.

This was more of a “seller” move. The Marlins are sending Villar to the Toronto Blue Jays for a player to be named later. That player has now been revealed to be outfielder Griffin Conine.

Villar came to Miami as a versatile defender who had potential to be a solid bat at the top of the lineup. His former team, the Baltimore Orioles, made him attainable in a glorified salary dump despite coming off an extremely productive 2019 campaign. Although he was thrilling on the basepaths, his short tenure came with frustration as well. While he led MLB with nine steals, he also led the league in caught stealings with five. He also struggled with plate discipline and poor plate vision. According to Craig Mish, people within the Marlins organization felt that he was very talented, but would play recklessly and “never fully bought in” to what the organization was trying to do.

As for the Marlins’ return on this trade, Conine is the son of Mr. Marlin, Jeff Conine.

This may at first glance seem a sentimental move, but Conine brings much needed power to a Marlins organization that could certainly use it. Griffin slashed .283/.371/.576 with 22 home runs in Single-A last season. He also brings above-average arm strength, which will prove useful in the spacious outfield at Marlins Park.

Díaz opting back in

Perhaps the most surprising turn of events on Monday was learning of the pending return of infielder Isan Díaz. The 24-year-old started the season with Miami, but exercised his right to opt out of the season during the Marlins’ COVID-19 outbreak at the end of July. Although his numbers hadn’t been great in his limited number of at-bats this season and the second half of last year, he’s still capable of providing professional at-bats for Miami. His presence makes Villar far more expendable.

Díaz has been practicing at the Jupiter alternate training site for the past week. However, he still needs to officially be reinstated by MLB.