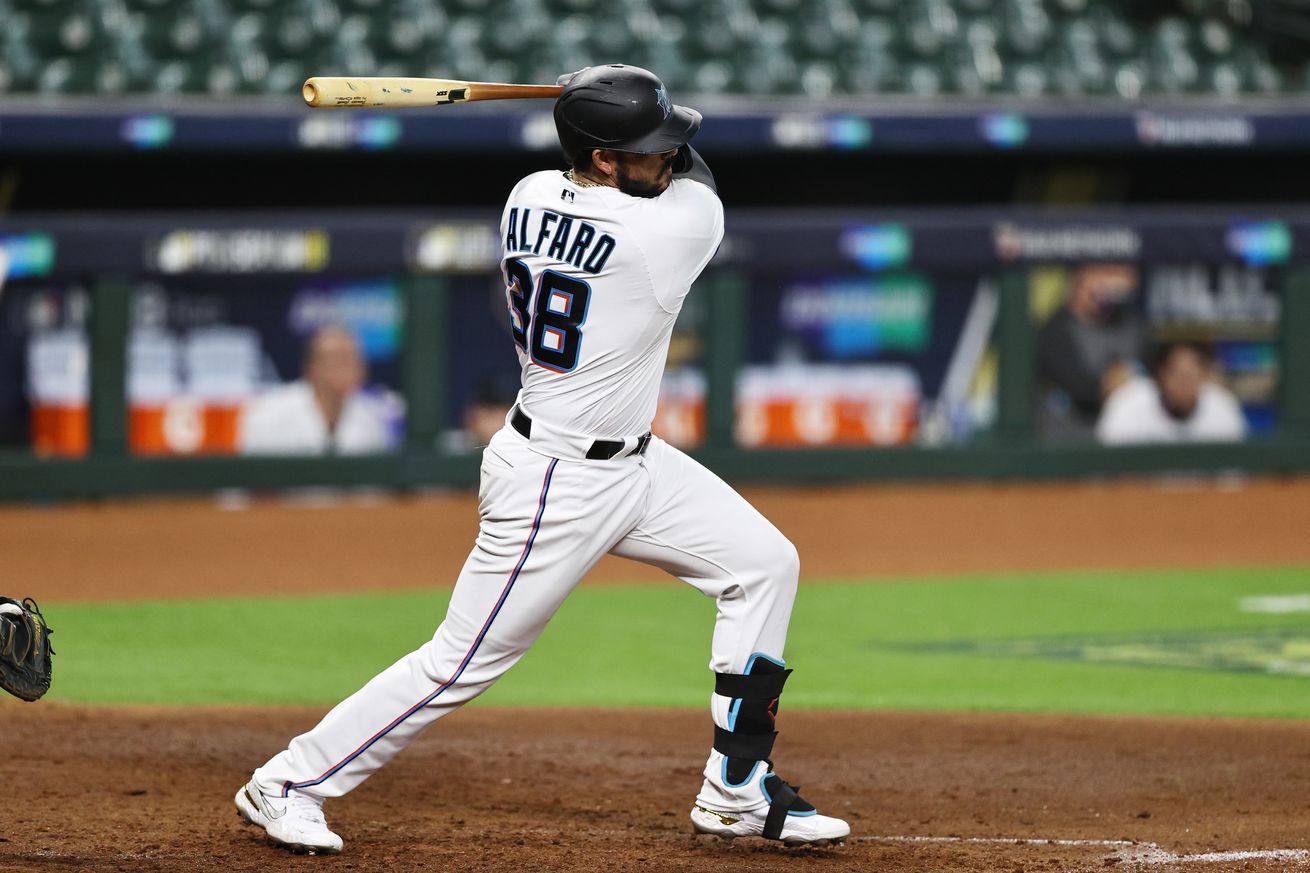 Alfaro struggled at the plate this season and his exit velocity levels keeps falling down. Could he show a better version of himself in 2021?

It would be a farce to say Jorge Alfaro has not had his chances with the Marlins. In his first season with the team in 2019, Alfaro appeared in 130 games, 113 of which he started. Alfaro would finish 2019 with 18 home runs, and a respectable .425 slugging percentage despite a below-average 94 OPS+.

We all know of the power Alfaro possesses at the plate, with his 21 home runs ranking 9th among catcher since the start of the 2019 season. And despite having his moments in parts of two seasons in Miami, Alfaro’s level of production might not be the one the Marlins are expecting from their backstop.

With that said, the question we pose to here is this: is it time to worry about Jorge Alfaro’s future in Miami?

In these aforementioned 31 games in 2020, Alfaro was a .226/.280/.344 hitter with only 21 hits, 16 runs batted in, and 36 strikeouts. However, these numbers are not what concern me. After all, one can always fall victim to bad luck, especially over a small sample size of games.

But concerns surrounding Alfaro stem from other underlying issues. For one, the former Phillies’ backstop seems be losing some of his bat speed, as his exit velocity has decreased steadily over the past three seasons: 91.7 MPH in 2018, 90.8 MPH in 2019, and 89.2 MPH in 2020. At the same time, this decreased bat speed has coincided with a career low launch angle of 2.8º in 2020, which is not the best for a runner of Alfaro’s ilk.

Plate discipline hasn’t been a friend of Alfaro’s either. His 2020 SwStr percentage, according to FanGraphs, was 24.3-percent, the worst rate of his five-year career (MLB average was 11.3-percent).

As previously outlined, Alfaro’s struggles might be partially caused due to bad luck or could merely be fixed with a few adjustments here and there.

Arguably the most concerning note of Alfaro’s 2020 season lies in his struggles with fastballs in the strike zone. The 27-year-old was 7-for-31 off fastballs in the zone this year, enough for a lousy .226 batting average and .258 slugging percentage with only one extra-base hit. Those numbers contrast big time with the ones he put in 2019: .344 batting average (42-for-122), .574 slugging percentage.

We know a lot of what transpired in this, a 60-game season, deserves the benefit of the doubt given many extenuating circumstances. With that said, it isn’t too far-fetched to think Alfaro can develop into the type of hitter Miami can rely on in the middle of their order for the foreseeable future. Continued struggles in 2021 would only further complicate the Marlins’ plans at the catching position. With that said, 2021 is make-or-break for Jorge Alfaro.