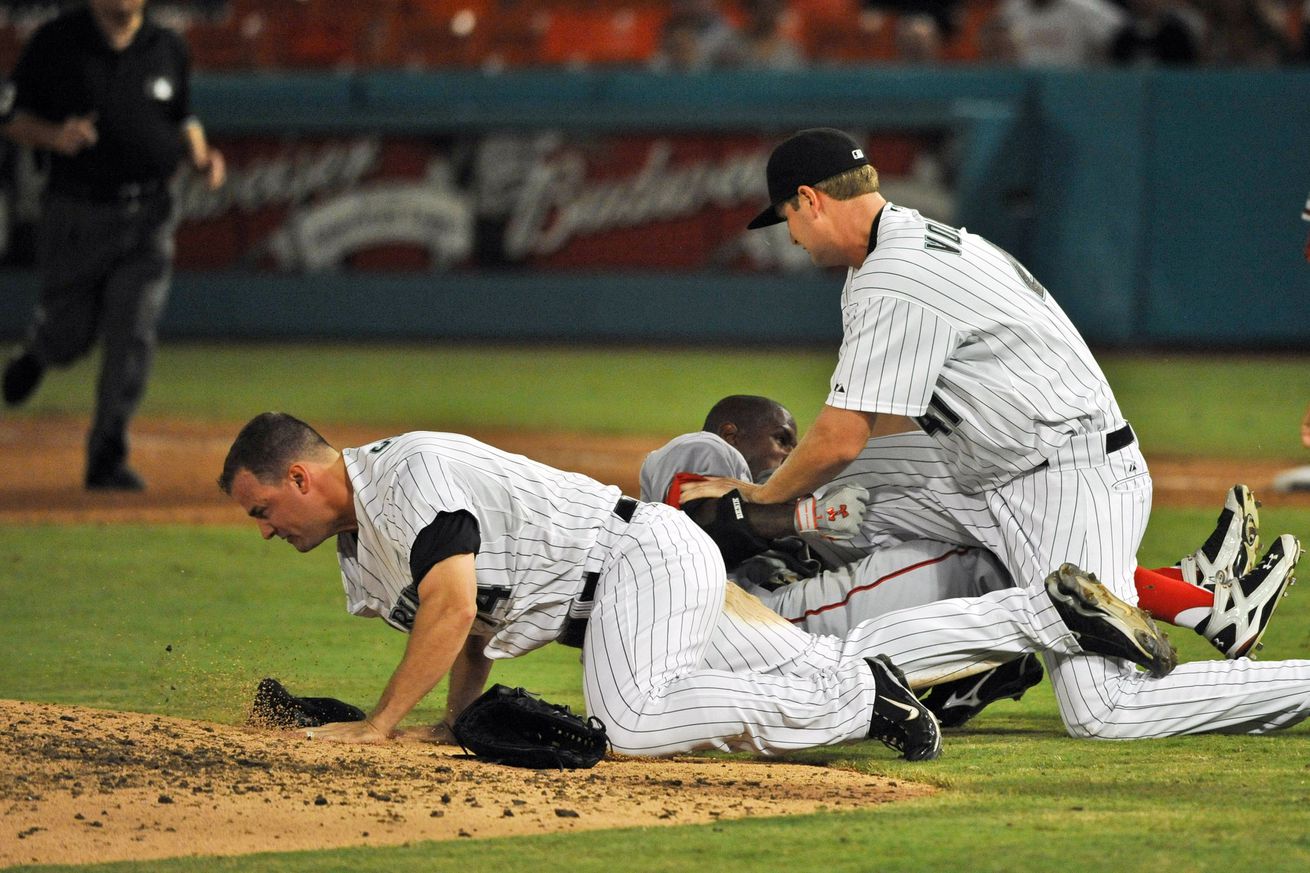 With the game all but decided, chaos erupted.

Florida’s first Major League Baseball franchise got its name because of first owner Wayne Huizenga’s admiration for how marlins fought when they were being reeled in. Huizenga likely envisioned this his team would have similar tenacity on the field.

In a game against the Washington Nationals on Sept. 1, 2010 at Sun Life Stadium, both the Nationals and Florida Marlins showed fight, but probably not the kind that Huizenga initially had in mind.

Most of the Marlins’ damage came early against a familiar face. They plated nine runs in less than two innings off former Florida starter Scott Olsen. Over the first three innings, Florida scored 14 times.

The Marlins led 15-5 in the top of the sixth when Washington lead-off man Nyjer Morgan stepped to the plate with a runner on second and no one out. To that point, Florida starter Chris Volstad had already hit three batters, including Morgan back in the fourth.

As Volstad’s first pitch went behind Morgan, the Washington outfielder immediately charged the mound and appeared to land a punch to the Marlins’ right-handed starter. Morgan was soon knocked to the ground by a clothesline from Florida first baseman Gaby Sanchez and the benches cleared.

Multiple players had to be restrained as both Volstad and Morgan were ejected. The fireworks, however, weren’t done. In the bottom of the seventh inning, Doug Slaten was ejected after hitting Sanchez with a pitch.

Morgan would be suspended for eight games while Volstad served a six-game suspension. The brawl overshadowed a contest where the teams combined for 26 runs and 31 hits. Florida won the contest, 16-10.

Giancarlo (then Mike) Stanton, Brad Davis and Cameron Maybin all homered for the Marlins in the win. Wes Helms finished with a team-high three hits and a game-high five RBIs in the victory. Donnie Murphy finished with three RBIs and two runs scored for Florida. Logan Morrison and Hanley Ramirez each scored three runs in the victory.

Ian Desmond was 3-for-4 with two runs scored and two RBIs for the Nationals. Will Nieves added a solo home run in the loss. Despite allowing six runs on nine hits and getting ejected, Volstad earned the win. Olsen took the loss.

Over the course of nearly three decades of baseball, the Marlins have had their fair share of altercations. One of the more memorable ones in recent memory came on this day a decade ago.