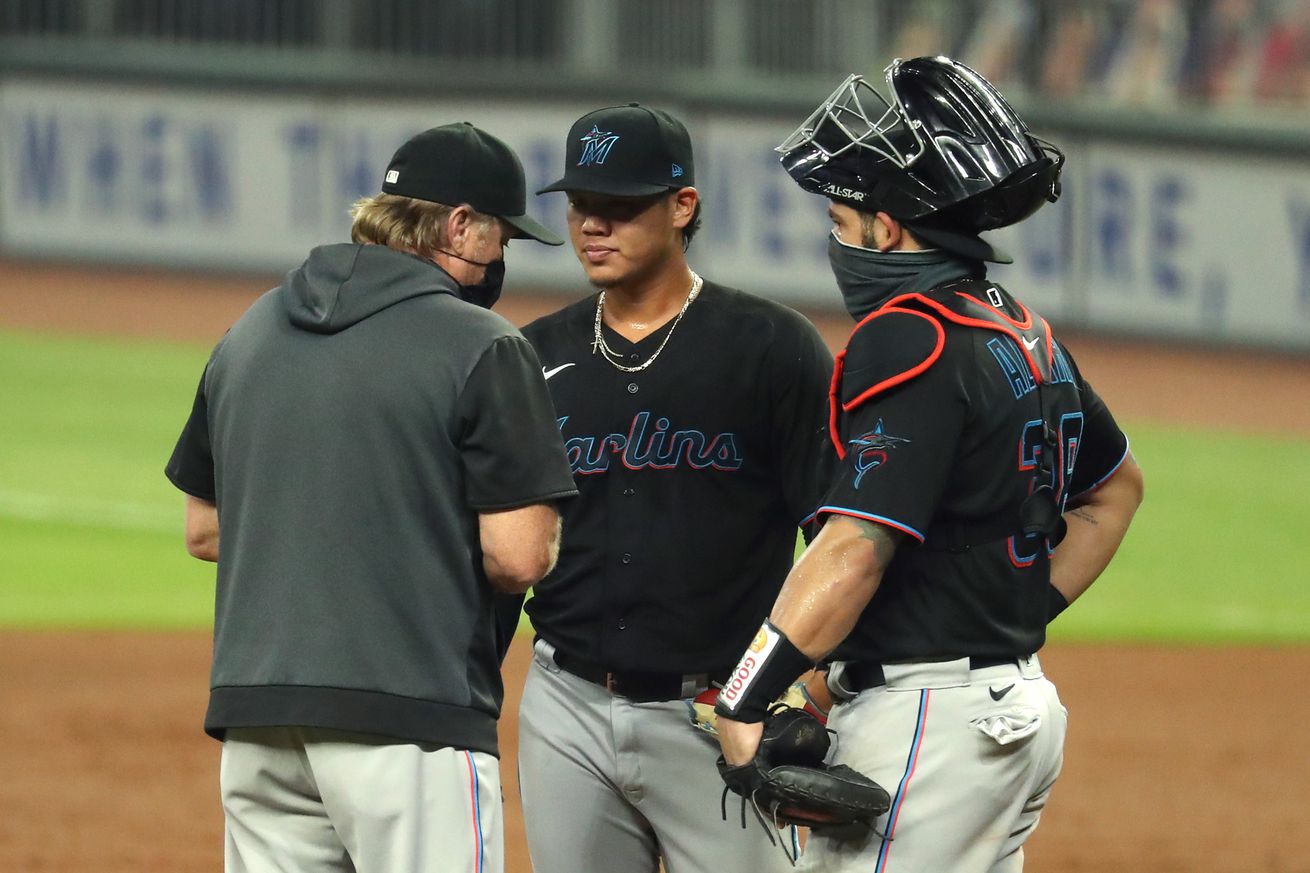 A questionable umpiring decision helped flip a game that the Marlins had a decent chance to win into a blowout of historic proportions.

Pablo López and the Miami Marlins started the bottom of the second inning by allowing a single to Dansby Swanson. Forty-three minutes and three outs later, their 2-0 lead turned into an 11-2 deficit.

López came into Wednesday’s game looking to improve from his last outing against Tampa Bay last Friday that saw him give up a season-high five runs in four innings. Unfortunately for the 24-year-old, he did not look sharp in his 1 1⁄3 IP during the Marlins’ 29-9 loss to the Atlanta Braves on Wednesday.

He began the second inning by allowing a single and two consecutive walks to load the bases for Ozzie Albies. Albies hit a ground ball to score Atlanta’s first run of the game.

Things would quickly unravel from there. López would get Ender Inciarte to fly out to center field for the second out, scoring the tying run on a sacrifice fly. Starling Marte made a throw from center field to third base to try to throw out Adam Duvall tagging up on that same play. The original call was safe at third, and was confirmed as such after the Marlins challenged the play.

“We thought he was—or—he was out at third,” Marlins manager Don Mattingly said. “That cost us like 10 runs right there missing that. After that, it got out of hand.”

Although the inning probably should have ended there, López wound up allowing five more runs before exiting the game. Jordan Yamamoto, who was brought back up to the MLB squad to mop up innings, came in relief. He allowed four runs, including two homers, before recording an out. In total, it took the Marlins 43 minutes and 61 pitches to get out of the second. Ten of their eleven runs were scored with two outs.

But the Marlins’ offense wasn’t done fighting. The Fish came back the next inning and cut the deficit to 11-5, thanks to a three-run home run by Lewis Brinson. Miami put up another three runs in the fourth inning, thanks in part to Jazz Chisholm’s first MLB home run. Jesus Aguilar, Brian Anderson and Jorge Alfaro all recorded RBIs as well.

“All night long, our offense just kept coming,” Mattingly said. “Lots of good at-bats. Jazz had a good night, (Brian Anderson) looks great. For a game like that, I know they get long and tough and get sloppy on the field sometimes because you’re on your legs so much, but at the plate I felt like our guys pretty much played until the last out.”

But Yamamoto wasn’t sharp enough to keep Miami in the game for long. He gave up 12 runs in 2 2⁄3 IP. His season continues to be disappointing after putting up promising numbers last year. His ERA ballooned from 11.42 to 18.26 after Wednesday’s game.

The 29 runs scored by Atlanta is just one fewer than the modern era major league record set by the Texas Rangers back in 2007. It’s the most runs the Marlins have ever given up, breaking the record of 25 against the Boston Red Sox in 2003. Atlanta hit seven total home runs, including three from Adam Duvall.

As disappointing of a loss as this was, the Marlins still walk away with a series win at Atlanta for the first time since 2016. They also remain at .500 with a 19-19 record. They still hold a wildcard spot, and are two games behind the Philadelphia Phillies for second place in the division.

They will face Philadelphia at home this weekend, where they will play seven games against them over the next five days. Thursday’s starting pitchers will be Sandy Alcantara and Jake Arrieta.