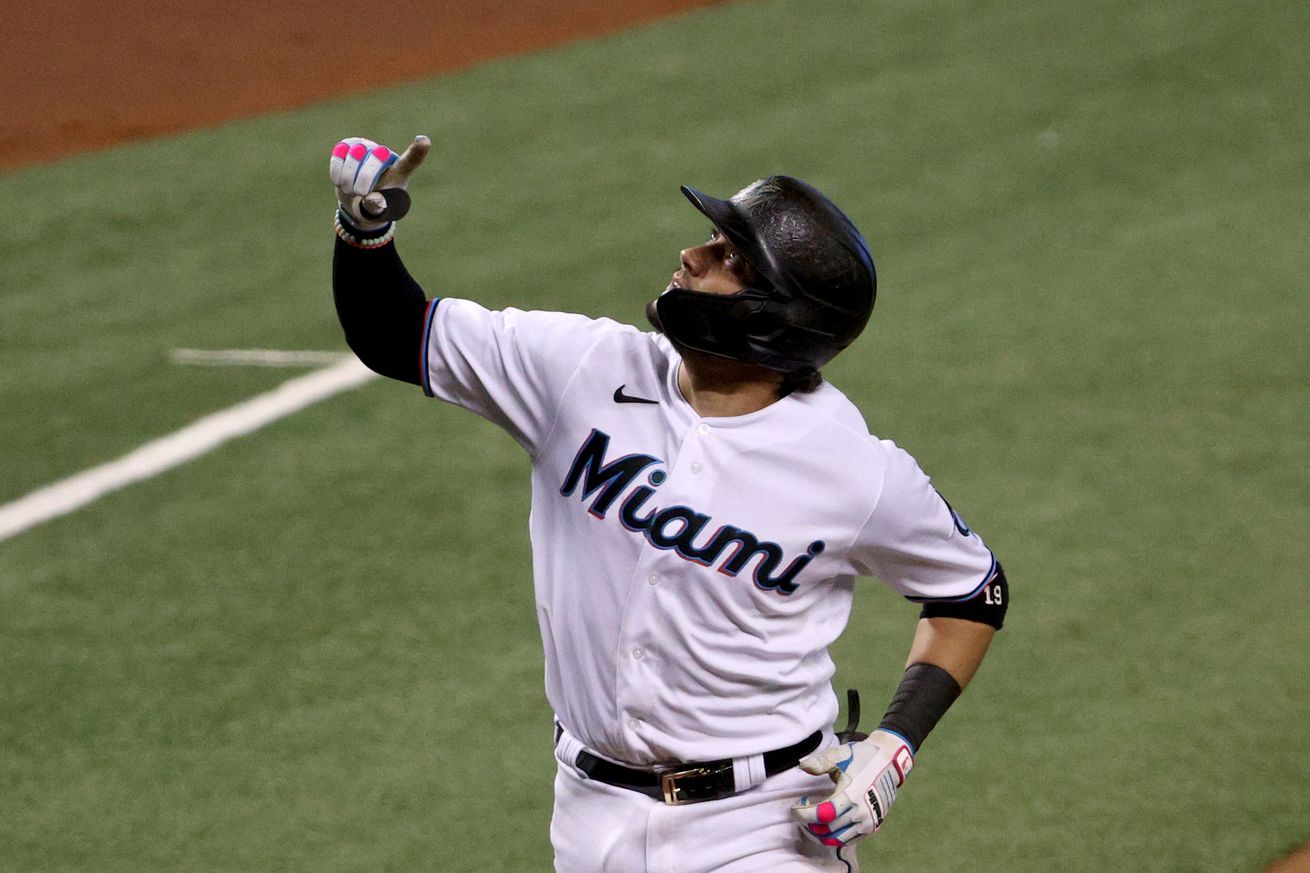 The Marlins pad their lead over the Phillies in the battle for second place in the NL East (and a coveted MLB postseason berth).

The Miami Marlins are back in the win column after beating the Philadelphia Phillies 6-2 in the series finale. The Fish ended up winning five of the seven games series against the Phillies.

Fish beat the Phillies in 5 of 7 games, this one led by Pablo López and Miguel Rojas

Gonna ride the wave not just to a playoff spot, but the NL East title?? pic.twitter.com/OgHBCrCggy

Pablo López got the start for Miami and was outstanding. The Phillies had right-hander Vince Velasquez on the hill, but he didn’t have much success against the Marlins.

Philadelphia got things going quickly thanks to Andrew McCutchen’s leadoff home run to center field. It was the former NL MVP’s seventh home run of the season and the fifteenth leadoff shot in his career.

López was able to shake off his early miscue and get Bryce Harper to line out to center. Alec Bohm followed with a pop out to second, and Didi Gregorius to grounded out to shortstop.

After a quick 1-2-3 inning by López in the top of the second, Matt Joyce got the Marlins’ first hit of the game with a single into right field. Joyce would advance to second on a groundout to the pitcher by Garrett Cooper.

Jazz Chisholm would come in clutch as he singled into center, scoring Joyce and tying the game at one. Chisholm would later advance to second due to a throwing error by the Phillies catcher as they tried to pick him off of first.

Miguel Rojas drew a four-pitch walk putting runners on first and second with one out and Isan Diáz at the plate. Diáz would weakly ground out but did advance both runners into scoring position for Chad Wallach. The Marlins’ backup catcher wouldn’t come through as he struck out chasing a fastball up and out of the zone to end the inning.

After a pop out to first by Scott Kingery, rookie catcher Rafael Marchan recorded in his first MLB hit with a line drive single up the middle. López struck out McCutchen but Harper would keep the inning alive with double down the right field line.

The Phillies had two runners in scoring position with two down and their rookie third baseman coming to the plate. However, Bohm couldn’t get the job done as López struck out Bohm on three pitches finishing him off with an 0-2 changeup.

Corey Dickerson led the bottom of the third off with a double down the left field line. Starling Marte followed that up with a single into right field, but Dickerson was held at third, putting runners at the corners with no outs and Jesús Aguilar at the plate.

Aguilar would come through with a double down the left field line, scoring both runners and giving the Marlins a 3-1 lead. The Fish would not add to their lead as the next three batters all struck out, stranding Aguilar at second.

Heading into the top of the fourth, Isan Díaz was pulled from the game in favor of Brian Anderson and played third. Rojas moved to shortstop, and Chisholm went to second.

High rate of injuries across MLB this season, but especially difficult for an athlete to stay healthy when they shut it down for a few weeks and then ramp it up again (like Isan did) https://t.co/fwvMHObFer

The Phillies failed to get the offense going in the top of the fourth as Gregorius lined out to center. Jean Segura popped out to second, and Phil Gosselin struck out swinging.

Miguel Rojas got things going in the bottom of the fourth with a leadoff single to right field. Brian Anderson stayed hot at the plate and smoked an RBI double into left-center scoring Rojas from first.

Wallach tried bunting to advance Anderson to third but couldn’t get it down and grounded out to third instead, leaving Anderson at second. Dickerson also struck out swinging to finish Velazquez’s day.

Velasquez threw 3 2⁄3 innings allowing seven hits, four runs, one walk and five strikeouts. Right-handed pitcher Blake Parker entered in relief for the Phillies. Parker did his job as he got Marte to chase out of the zone to end the inning.

After Adam Haseley grounded out to third, Matt Joyce made an impressive play out in right when Scott Kingery lined one to deep right. Joyce hauled it in, making an over-the-shoulder catch to record the second out of the top of the fifth.

Jesús Aguilar got the bottom of the fifth going with a leadoff walk, his second time on base. The Fish would strand Aguilar at first, however. Parker struck out the next three men up.

After another 1-2-3 inning by López, Blake Parker was pulled from the game heading into the bottom of the sixth. Parker was outstanding as he pitched 1.1 innings, allowing no hits, no runs, one walk and four strikeouts. Former Marlins relief pitcher David Phelps came in to relieve for the Phillies.

Phelps was immediately greeted by one of his former teammates as Miguel Rojas homered to left to lead off the bottom of the sixth. The homer was Rojas’ third of the season.

Phelps would rebound from the solo blast by Rojas and get Anderson and Wallach to strikeout and Dickerson to ground out to first.

In the top of the seventh with one out, Joyce made another terrific catch right up against the right field wall, stealing a double away from Segura. López would finish the inning with a swinging strikeout of Phil Gosselin.

Starling Marte started the bottom of the seventh with an opposite field home run to right extending the Marlins{ lead. It was Marte’s fifth home r of the season and his third with the Marlins.

After Aguilar grounded out to Gregorius, Girardi pulled Phelps from the game. Phelps had a rough day as threw 1.1 innings, allowing two hits (both home runs), two runs and two strikeouts. Adam Morgan would get out of the inning as he struck out Lewis Brinson and got Cooper to ground out to the shortstop.

Heading into the top of the eighth, López was pulled from the game after a terrific performance. Lopez pitched seven innings allowing three hits, one run, no walks and six strikeouts. Right-handed pitcher Brad Boxberger came in relief for the Fish.

Monte Harrison also came into as a defensive replacement for Corey Dickerson. Harrison went to right, and Lewis Brinson moved to left.

After Haseley lined out to right, Scott Kingery hit his second home run of the season to center field giving the Phillies their first hit since Harper’s double in the third. Boxberger was able to bounce back after the homer with a line out to right and strikeout of McCutchen.

After Chisholm grounded out, Morgan departed. The left-hander had a solid appearance as he threw a clean inning while striking out one. Right-hander Hector Neris was summoned for the Phillies. Neris recorded the next two outs as Rojas lined out to deep right and Anderson popped out.

After one inning of work, Boxberger was pulled in favor of closer Brandon Kintzler to start the ninth. He shut the door with flawless frame to give the Marlins the win in the series finale. Pablo López earned his fourth win of the season. Vince Velasquez was saddled with his first loss of the season.

This series was huge for Miami’s playoff hopes. Winning five out of seven over the Phillies not only put them in second place in the National League East but they’re now 1.5 games ahead of the Phillies. Philadelphia has had their struggles against Miami this season as their 3-7 record against the Marlins will attest.

The Marlins are back on the diamond Tuesday night as they’ll begin their three-game series against the Boston Red Sox. Sandy Alcantara is scheduled to take the bump for the Fish, and he’ll be opposed by right-handed pitching prospect Tanner Houck, who’ll be making his MLB debut. Houck was the club’s 2017 first round pick out of the University of Missouri. First pitch is at 6:40 pm ET.