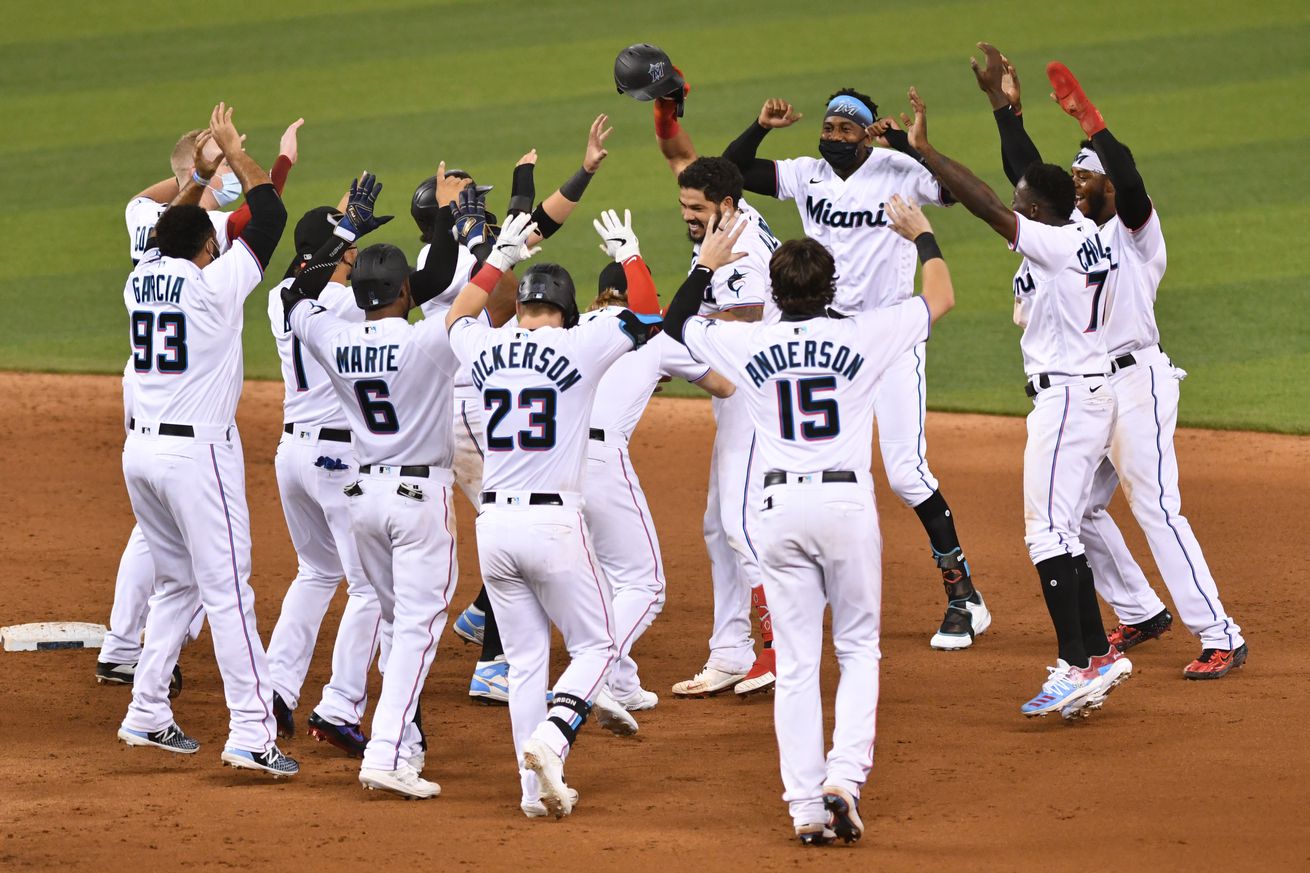 Starling Marte doubled twice, including a game-tying three-run double in the eighth, and the Marlins came back to win the series opener against the Phillies 7-6.

It’s looking like the Marlins absolutely robbed the Diamondbacks in the trade for Starling Marte.

On a night where Miami was itching for a clutch hit, Marte erased a three-run deficit with a bases-clearing, game-tying double in the eighth inning to knot the score at six runs apiece in the eighth inning before Jorge Alfaro played ninth inning hero with a walk off single to give the Marlins a 7-6 victory Thursday night. The win moves the Fish back over .500 at 20-19 and and inches Miami to just a half game behind Philadelphia for second in the NL East.

“We’re going to be fighting no matter what the score,” said Alfaro. “The mentality right now is don’t quit. Keep competing, keep fighting, and that’s all we’re trying to do.”

Marte stole the show with the game’s biggest hit, but the center fielder 11 days into his tenure in Miami already had an extra-base hit before even stepping into the batter’s box in the eighth inning. Marte got the scoring started in the first inning with a double down the left field line that brought home the first run of the night for the Marlins in the form of Corey Dickerson.

Phillies starter Jake Arrieta kept the Marlins mostly in check after that, allowing three earned runs on the night before the former Cy Young winner exited with two down in the sixth inning. But just as teams have done all season long, Miami soon after finally capitalized on a Phillies bullpen that has struggled much of the season.

Marte’s double came after countless squandered opportunities, 11 to be exact. Miami was just 1-for-11 with runners in scoring position before Marte cleared the bases. That one swing boosted the Marlins’ win probability from 12.9% to 57.9%, according to FanGraphs.

One inning later, Brian Anderson wasted no time in beginning a ninth-inning rally with a leadoff single. Don Mattingly immediately went to the bench and pinch ran for Anderson with rookie Monte Harrison, a move that payed massive dividends for Miami.

Harrison scored the winning run on Alfaro’s single, but instead of sprinting around the bases, only had to jog home. That’s because after advancing to second on a groundout, the rookie rolled the dice and made the risky decision to attempt a steal of third. J.T. Realmuto’s throw was a good one, but the speedster Harrison beat it, and from there the Fish were on the doorstep of a victory.

ALFARO WITH THE WALK OFF MARLINS WIN pic.twitter.com/IKiJjGpF6z

Marlins starter Sandy Alcantara may not have had the start he wanted, but the defense behind him didn’t do him any favors. Errors from Marte and Jesús Aguilar helped put up six runs on the board for the Phillies, just three of which were earned over the six innings he pitched. But the fighting Fish were able to claw back and ultimately beat their divisional rivals for the third time in four games this season.

The Marlins came into Thursday’s game owners of the eighth and final National League playoff spot, and the win keeps Miami steadily in the race to sneak in. Thursday’s game was also the first of seven straight games the two teams will play at Marlins Park. All of them are crucial to Miami’s playoff hopes that may have seemed like a pipe dream after losing 18 players to COVID-19. But with just 21 games left in the regular season, that dream is very much real.

Next up, Trevor Rogers gets the ball for the Marlins Friday afternoon at 5:10 in the first game of a doubleheader. Both contests will be seven innings long, an experimental format that has actually treated the Fish well so far.