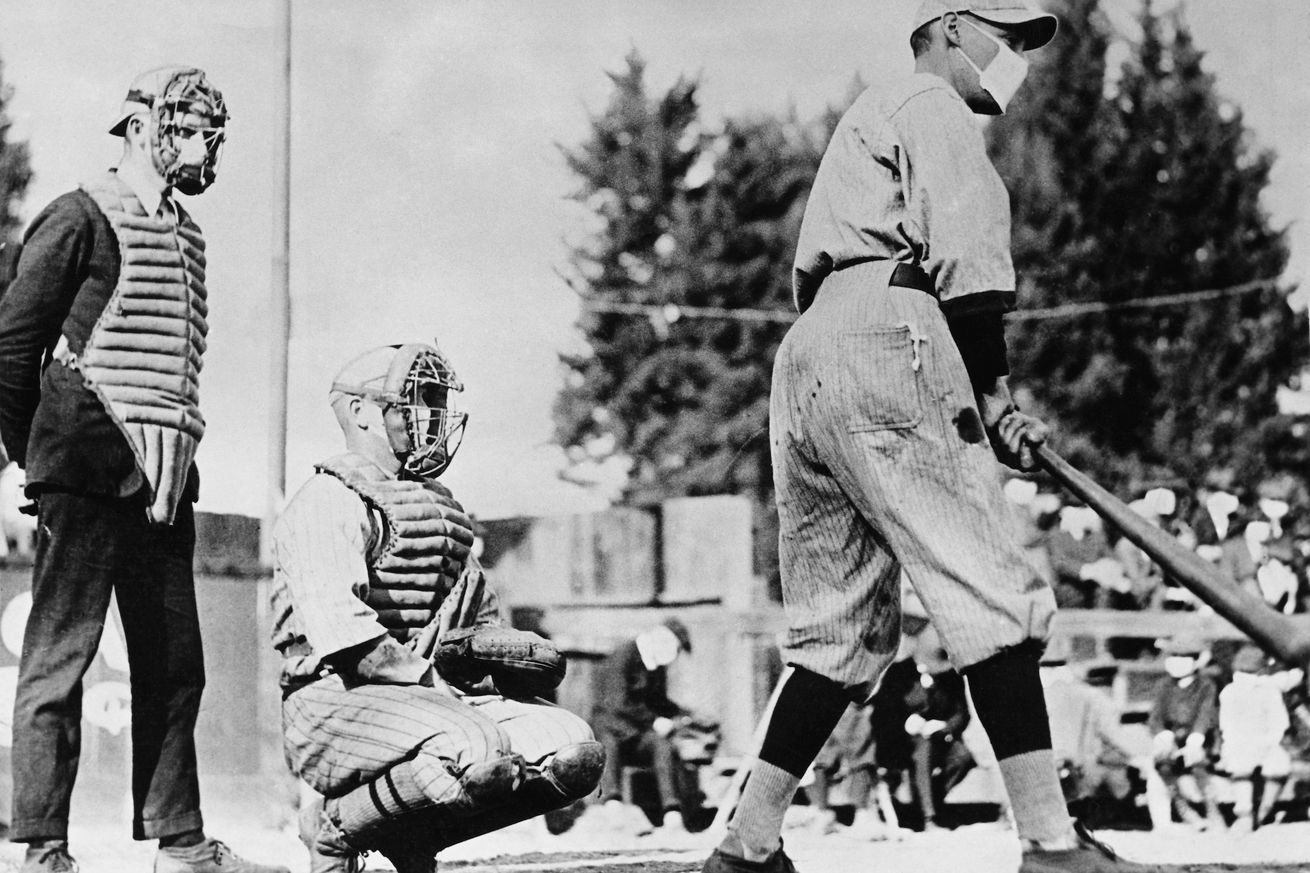 The last time baseball was stuck between a rock and an infected place.

It will all seem uncomfortably familiar to you. Tremendous pressure being levied upon baseball to shorten its season or even close down until the threat can be abated. Disagreement and dissent between the players on the teams angling for the postseason and arguing with the commissioner of baseball as well as the relevant owners; demands for full shares of their players’ pay for making the postseason in a shortened series. A disease percolating through the population, a lethal strain of the H1N1 influenza virus, and a clueless government refusal to acknowledge its seriousness even while thousands are dying.

This is baseball and Boston in the early fall of 1918. Skip Desjardin’s saga of the national pastime and the national spirit in the throes of war and epidemic won’t be a comfortable read, but it will be a fascinating one. It unfolds like the shuffling of a deck for a card game, though in this case the cards are biological and political memes like some crazed version of Levi-Strauss’s Structural Anthropology. In 1918 the government was locked in an argument with the Lords of Baseball about shortening the season, possibly eliminating the World Series and cancelling the following season altogether, not because of the flu but to keep the public focused on the war effort in Europe.

Incredibly enough, the flu didn’t even play into the urgencies our leadership felt—from the White House through the Massachusetts state house to Boston’s city hall—because they didn’t want the population to know about the illness at all. But the cases piled up along with the death toll as people were literally dropping in the streets even as the World Series, the last one Boston would win for 86 years, was being played. Before September 1918 was over, obstructing the news became impossible. Some ballplayers volunteered for military duty and found themselves quarantined in deathtrap barracks, like Camp Devens in Boston. Many others fled the cities for the supposed safety of the countryside, then joined war industries to avoid the draft only to find themselves surrounded by infected workers in the close quarters of their factories.

In addition to the names of owners, ballplayers and perhaps baseball officials you might recognize, you will also become acquainted with some of the genuine heroes who offered supreme sacrifices not only along the front in France but along the less well publicized front in Boston and its outliers.

By contrast, there’s also a rogue’s gallery of scoundrels, incompetents and cowards whose company could, as novelist Jim Harrison put it, gag a maggot. You will meet, among other unsavory characters, Woodrow Wilson’s Goebbels prototype and war propagandist George Creel, as creepy as anyone you might recognize in Washington now. Obsessed with the war effort, Wilson himself comes off looking pretty bad here. His response to the H1N1 epidemic, as it unfolds with lethal rapidity through the military cantonments of Massachusetts, is pretty much to downplay or ignore it.

Most medical experts today agree the disease first took hold in the American Midwest, in a military base in Kansas, vectored perhaps by some foul little dog. Spreading easily in the close quarters of the barracks, it was spread to Boston by routine troop transfers and to Europe by the first waves of American soldiers. From those troops at the front it spread quickly through the allied forces, the British and French, and was carried into Spain by French tourists and businesspeople. How the German troops became infected is still being debated; some caught it at the front but Spanish travelers might also have been responsible. Military censorship was strict under both the allied and German regimes so word about the disease ravaging their forces was suppressed. Spain, not a player in the conflict, had little press censorship at all, so reportage of what was happening on the Iberian peninsula was unhampered. The world heard of the Spanish outbreak earliest, and they got lumbered with the imprimatur.

It is heartbreaking to watch the best doctors and researchers of their age, in these years long before electron microscopy and DNA typing, struggle to identify invisible “bacteria” and come up with a vaccine derived from an organism which hadn’t been discovered yet. As horrifying and tragic are the willfully ignorant pronouncements of so-called public servants. Local health commissioners like Dr. William C. Woodward, surely one of the great villains of the epidemic, mayors and city councilmen downplayed the disease as it wiped out whole companies of troops and entire families within a few days of infection, urging constituents to keep their schools and businesses open and attend their churches. And there were the usual quack cures and blandishments to get out in the fresh air, swim at the beach, and leave your windows open. Of course none of this worked.

Babe Ruth actually caught the Spanish Flu twice and survived. He probably came down with it in May when it was misdiagnosed as tonsillitis because the doctors couldn’t recognize its symptoms or behavior; the disease hadn’t won its sobriquet as “Spanish Flu” yet. It was being spread already but not as massively as it would once it dug its fangs into the big troop training and transshipment cantonments on the east coast. The first inklings of the disease weren’t even recognized well enough to bring down the bootheels of George Creel’s protectivism over the war effort. Babe actually got out of bed and pitched a game while still slightly delirious and won. When questioned by the sports press about how he felt, he characteristically replied, “Hell, I coulda pitched a double header if they wanted me to.”

He caught it again in mid-September, after the World Series, and went home to a hospital in Baltimore to recover. By then, one would think, he knew what he was up against. Of course, he did survive well enough that Red Sox owner Harry Frazee, stunned by how sharply the war had eaten into his postseason gate, could still package him for Jacob Ruppert and send him to the Yankees. The rest, as they say, was myth, legend, dust.

While Ruth got better in Baltimore other ballplayers weren’t as fortunate. Canadian slugger Charlie Swain died at 33 from respiratory collapse. Among the other unlucky ballplayers were Larry Chappell of the Boston Braves, catcher Harry Glenn who had played with the Cardinals, and a long list of minor leaguers. The popular veteran umpire Silk O’Loughlin died in December.

The bug took down journalists too, often with terrifying speed. It was not unusual to feel a little sick in the morning, very sick by dinner, and be dead by breakfast. Feature sportswriter Eddie Martin, an official World Series scorer and secretary of the Boston chapter of the Baseball Writers’ Association, who covered the series for the Boston Globe, died shortly afterwards. As the disease spread to Philadelphia with troop transfers and the help of a very badly advised War Bonds march, local baseball writer Chandler Richter was carried off along with umpire JJ McNulty.

By the 1919 season, which itself was now doubly in danger of cancellation, the armistice in Europe eliminated the excuse of distraction from the war. Soldiers returned, including ballplayers, and that year we had baseball, but not as usual. The virus was still spreading to other American cities and out into the countryside and would continue to ravage the nation until early in 1920 when it seemed to run its course. Yes, baseball went on, but here’s what it looked like: