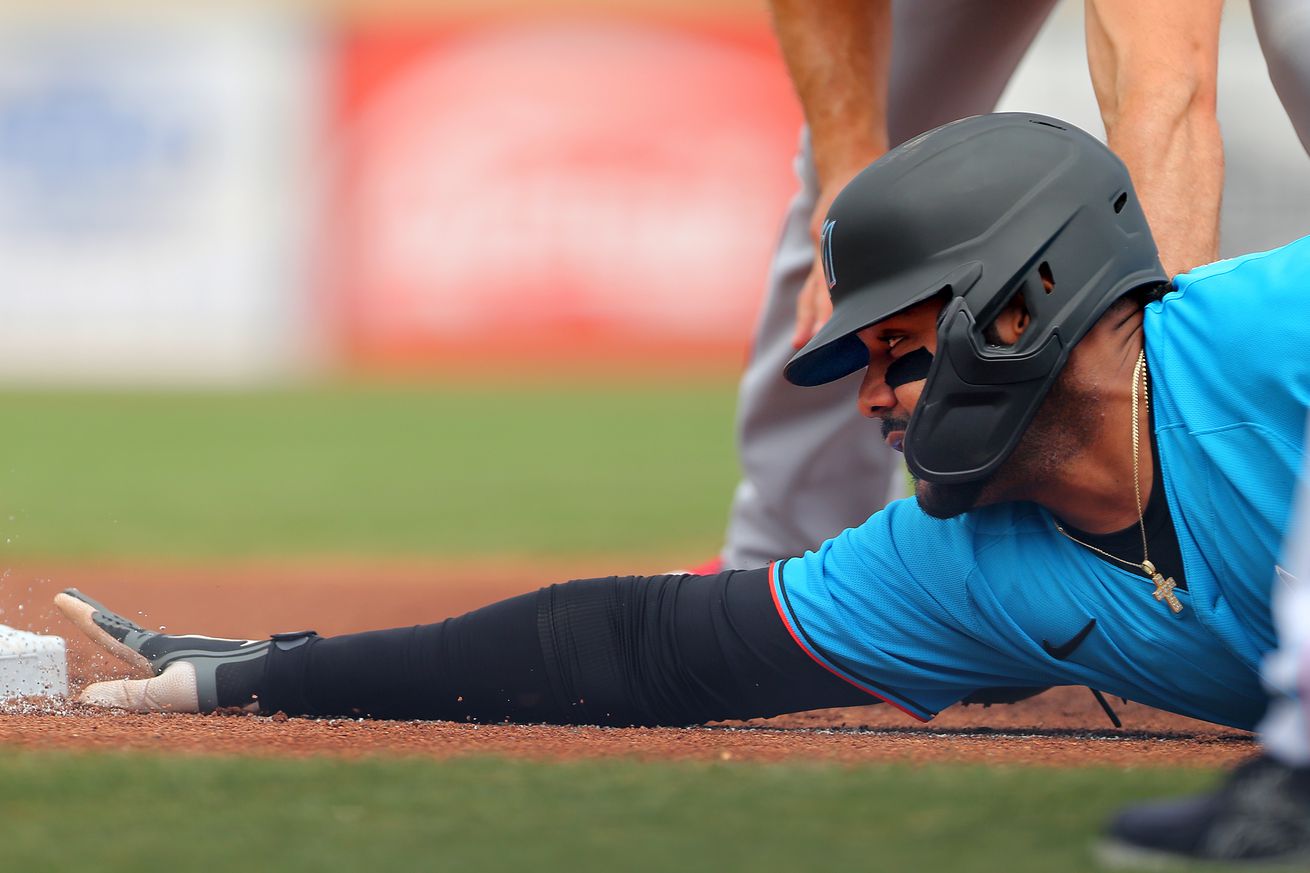 Each of these simulations say that the Marlins’ Father’s Day losing streak would’ve continued in 2020. | Photo by Rich Schultz/Getty Images

The latest simulated Marlins stats and storylines from Baseball-Reference, The Athletic and Strat-O-Matic.

The 2020 Marlins regular season is off to a delayed start, but technology is a beautiful thing, ain’t it? Simulation games have created alternative universes in which this much-anticipated campaign is running precisely on schedule, featuring many of the players who were projected to make an impact for the real-life Fish.

At the end of each week, I will do a roundup of how the Marlins are performing.

Baseball-Reference is simulating the entire 2020 MLB schedule using the game Out of the Park Baseball 21 (OOTP 21). Results are published daily at around noon ET.

Hard to put into words how severely Jorge Alfaro has been struggling at the plate. The athletic catcher blasted his third home run on Apr. 24 and has added only one since. His -2.4 Win Probability Added is worst in Major League Baseball. Yes, dead last among nearly 700 players who have batted so far this season.

Meanwhile, the dream campaign continues for shortstop Miguel Rojas. He has a decent chance at reaching 20 HR/20 SB—unthinkable for somebody who entered this season with only 20 career homers and 19 steals.

The Marlins capitalized on NL East matchups during March/early April and started hot in 2020, but those have proven to be problematic for them since then. They’ve lost six of their last eight series against division rivals (with one win and one split).

Veteran outfielder and 2019 AL All-Star Hunter Pence made his Marlins debut while pinch-hitting on Sunday.

Just like Baseball-Reference, staff members at The Athletic are using OOTP 21. Editor Or Moyal is serving as general manager for the Marlins.

However, their simulation began after the MLB Opening Day date and they are moving at an accelerated pace. Results for the Marlins are already available through Sept. 23. For those who want to take a deep dive into the organization’s progress, TAAU also provides data for all Minor League Baseball affiliates.

The Triple-A Wichita Wind Surge finally came back down to Earth with eight losses in their last 11 games (now 45-25 for the season). Lázaro Alonso continues to be a bright spot anyway, currently raking in the month of June with a .362/.520/.741 slash line and seven home runs in 77 plate appearances.

Jonathan Villar is running free. He’s up to 26 stolen bases, more than any Marlins player had in the 2018-2019 seasons combined. Although Alfaro continues to get the lion’s share of work behind the plate, Francisco Cervelli is taking advantage of his limited opportunities.

Take part in All-Star voting! The following Marlins are listed on the National League ballot: C Alfaro, 1B Jesús Aguilar, 2B Isan Díaz, 3B Brian Anderson, SS Miguel Rojas, OF Corey Dickerson, OF Harold Ramirez and OF Villar.