Right-hander Tom Koehler, in camp with the Pirates as a non-roster invitee to Spring Training, announced his retirement from baseball on Instagram this morning. The 33-year-old Koehler says he’s looking forward to “starting [his] next chapter in the game,” whenever and whatever that may hold. For now, it seems as though he’ll take some time with his family. 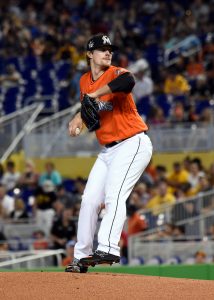 From 2013-16, Koehler was a solid and durable constant at the back of the Marlins’ rotation, averaging 30 starts per season while pitching to a 4.14 ERA with averages of 6.8 strikeouts, 3.7 walks and 1.0 home runs per nine innings pitched. He struggled early in the 2017 season and found himself traded to the Blue Jays, with whom he posted an intriguing 15-game relief stint (2.65 ERA, 18-to-6 K/BB ratio in 17 innings). That showing prompted the Dodgers to take a look at Koehler in the offseason with the hope that he could transform his career as a late-inning bullpen piece.

Instead, Koehler was beset by shoulder injuries in 2018. After spending more than half the season trying to rehab an anterior capsule strain and make his Dodgers debut, Koehler underwent surgery that ended his 2018 season. He never threw a pitch at the MLB level for the Dodgers. He signed with the Pirates both last offseason and earlier this winter but wasn’t able to get back onto the hill.

It’s a tough way to end a playing career, although as an 18th-round senior sign back in 2008, Koehler exceeded any and all expectations. The Stony Brook alum pitched in 161 Major League games, totaling 784 1/3 innings of 4.39 ERA ball along the way. Koehler’s 36-55 record is more an indictment on the sub-par Marlins rosters surrounding him for much of his career than on his own abilities on the mound. He was generally a serviceable option, twice leading the club in games started and once leading them in innings pitched. Koehler was never a household name but pitched into his arbitration years, helping him to secure more than $12MM in total salary. Best wishes to Koehler in whatever path he next pursues.