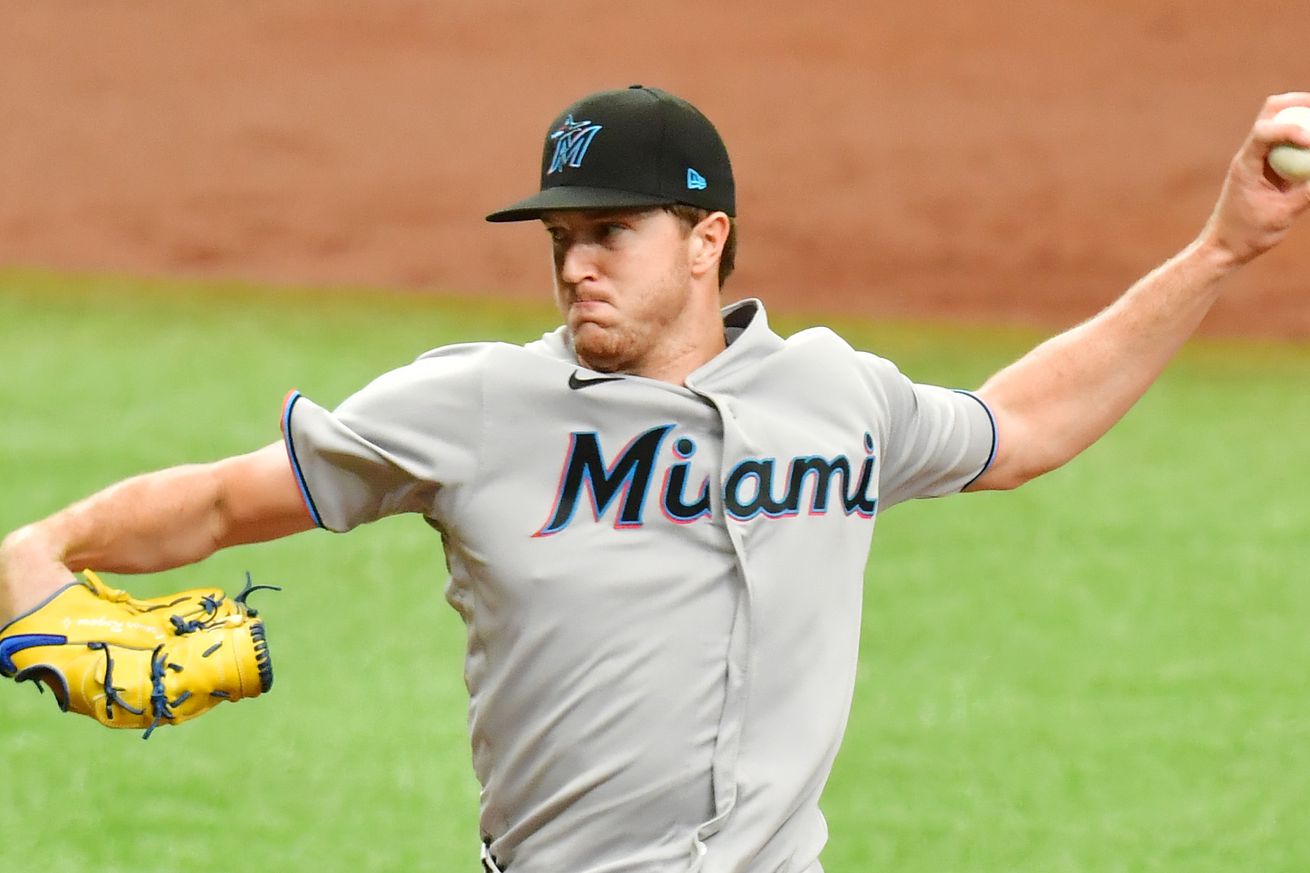 The young left-hander has found immediate major league success, cementing himself as a member of the Marlins starting rotation during their playoff push.

For the first time in a long time, the Marlins have had an excess of two things: storylines and starting pitching. As a result, it may be easy to overlook the strong start to Trevor Rogers’ MLB career, especially when you consider the national attention Sixto Sánchez has garnered with his impressive debut.

The Marlins have long had high expectations for the 6’5” left-handed pitcher ever since the team selected him with the 13th pick in the 2017 MLB Draft out of Carlsbad High School in New Mexico.

Rogers did not make his professional debut until mid-2018 due to some minor arm issues and was a little bit slow out of the gate after the time off. The hard-throwing southpaw came back in 2019 and reminded everyone why he was a first-round pick, pitching to a 2.53 ERA across 18 starts while punching out 122 in 110 1⁄3 innings for High-A Jupiter.

Trevor’s impressive run in Jupiter earned him a late season call-up to Double-A Jacksonville where he faced made five starts and continued to look solid. While the numbers may say otherwise (4.50 ERA in 26 IP), Rogers put together four quality starts with one “blow up” game where he surrendered six earned runs.

Coming into this season, the thought that Rogers could make a big league impact for the 2020 Marlins seemed a bit far fetched. The minor league season was cancelled and he had only reached Double-A for a cup of coffee, which left him severely lacking in professional experience. But after a strong showing in Spring Training 2.0 and at the alternate training site, the Marlins decided to give him a shot despite having thrown just 209 career innings.

Rogers has taken that opportunity and ran, improving each start and developing in front of our eyes. He looked better than ever in his last outing against a tough Tampa Bay Rays team, punching out ten across six frames while only walking one. The Rays were able to get to Rogers for 3 earned runs thanks to a pair of solo-shots by a red-hot Randy Arozarena and a fluky solo homer off the bat of Hunter Renfroe that had an XBA of .080, per Statcast.

Home runs have never been an issue for Rogers, only seeing his pitches leave the yard 14 times in the minors and heading into his start at hitter-friendly Tropicana Field, Rogers had not surrendered a home run to the Mets in either of his two outings against them.

While Rogers doesn’t have one true “plus” offering, he is able to get a ton of swings and misses thanks to his high fastball spin-rates, length and tough arm angle. His fastball averages around 93-94 MPH, but he is able to dial it up to 97 if needed. His high spin rate of 2,422 RPM on his fastball helps create the much desired perceived rising action which generates a lot more swing and miss. Put simply, it is better to throw kind of hard with a high spin rate than really hard with a lower spin rate most of the time.

On top of the high spin rate and relatively high velocity, Rogers gets so much extension towards home that the ball gets on hitters much more quickly or in other words, his perceived velocity is higher. Pair that with the tough three-quarters arm slot and left-handed hitters are in for a bad time.

It is no surprise that Rogers throws his four-seam fastball almost 60% of the time against lefties, because it sets up his other pitches. When the heater is hard to pick up and in a hitters mind, the slider and change become that much more effective, especially when the pitcher can locate it on both sides of the plate.

Both of Rogers’ off-speed offerings are average to above average at best, but when he sets them up with located fastballs, slider plays up against lefties and the change-up plays up to righties. The southpaw goes to his slider roughly 20% of the time against left-handed hitters, making it his second favorite pitch while still throwing the changeup in 12% of his pitches, which is rare for left-on-left.

Trevor Rogers allows the first HR of his career, but responds with this nasty K pic.twitter.com/xGQLDPzZsD

When a hitter is seeing a fastball like the one Rogers has nearly two-thirds of the time, they may sell out for it and when they do it can leave them exposed to swings like the one above.

Rogers doesn’t quite go to the fastball as much against righties, using it in roughly 47% of his pitches, but he enjoys throwing his changeup twice as much at nearly one-quarter of the time. He also mixes in a sinker at 15% and the slider at 13%.

Facing right-handers is when Rogers’ impressive command is put on display. Rather than just blowing it by guys, Rogers is crafty, setting up his pitches well. With the way he hides the ball and the aforementioned three-quarters arm slot, his pitches look like they are coming across the plate towards righties.

A fastball with a high spin rate plays best at the top of the zone because of that perceived rising action, so it’s no surprise that Rogers likes to live up and in with his heater on right-handed hitters.

Imagine you are a right-handed hitter and this long, lanky lefty keeps his front side closed and last minute his arm whips around with a fastball that almost feels like its coming from first base in on your hands. The only way to hit that pitch is to pull it, which is exactly what Rogers wants you to think, because right when you’re geared up to pull that up and in fastball deep into left field, he spins you a changeup that breaks in the opposite direction.

Whether Rogers uses the changeup or the sinker, both tail away from right-handed hitters which is a bit of a brainteaser when it’s seemingly coming towards the hitter from Rogers’ arm slot. As a result, Rogers gets more swings and misses on his changeup than any other pitch at 37%.

A lot of the things that Rogers has going for him, you can’t teach which is why Rogers has a good shot at being a front-end arm. A 33% strikeout rate so far in the big leagues with an arsenal that is above average at best can only make you wonder just how high his ceiling can be as he hones in on his stuff and makes it sharper.

Another reason to look for progression from Rogers is the fact that despite his solid stat line, the 22-year-old has actually been a bit unlucky. Some of the bad luck was alluded to earlier in the mentioning of Renfroe’s home run. On a larger scale, despite an opponents’ xBA of .103 on fastballs this year, they are hitting .231. Rogers also has a discrepancy of nearly 100 points between his expected and actual batting average allowed to left-handed hitters, which can be traced back to an unsustainable .385 BABIP.

While some pitchers can be outliers to certain metrics, it is fair to assume that if Rogers continues to pitch the way that he has been pitching, the numbers will level out in his favor. Anticipating that his opponents should regress to the mean paired with the fact that he is so young and just scraping the surface with his off-speed stuff, the Marlins may just have another legit rotation piece for the foreseeable future.