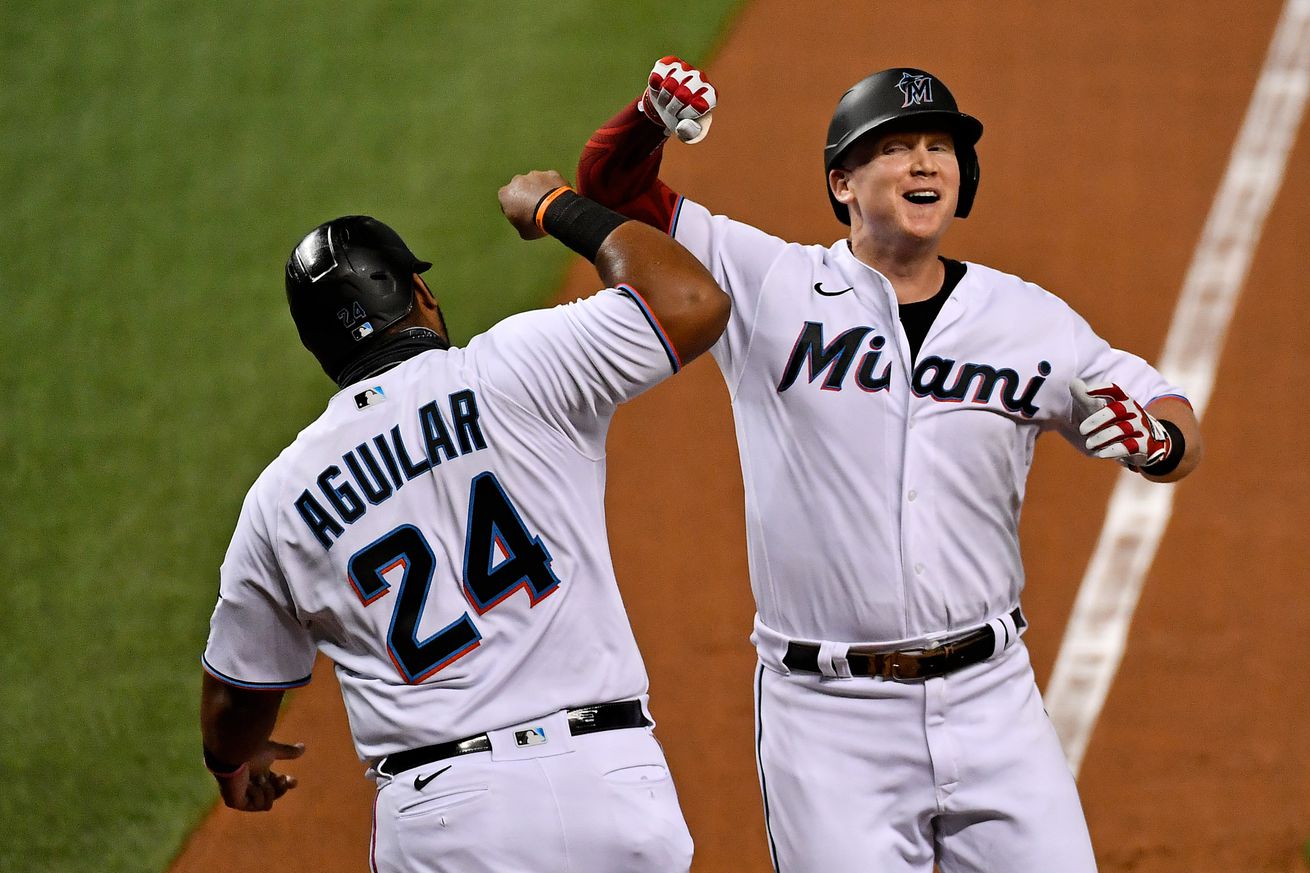 Jesús Aguilar was a revelation for Miami in 2020, but with Garrett Cooper continuing to show promise, Miami is in a bit of a one-position pickle with what to do at first base come the 2021 season.

When the Marlins acquired Jesús Aguilar on waivers in December 2019, the move was seen as low-cost, high-reward.

Following a breakout 2018 that saw Aguilar hit 35 home runs and drive in 108 runs en route to a selection to the NL All-Star team as a member of the Milwaukee Brewers, 2019 was a year marred by transition and adversity. That season, the then-29 year old posted a less-than-stellar .236/.325/.389 slash line, ending the season with 12 home runs in 131 games in year split between Milwaukee and Tampa Bay. Aguilar’s OPS+—a mark where 100 is league average—fell from 135 the previous season to 87 in 2019.

Upon joining the Marlins though, Aguilar managed to prove a pleasant surprise, finishing the 2020 season with a modest .457 slugging percentage and 120 OPS+. Aguilar also demonstrated the ability to make consistent contact, striking out in just 18.5-percent of his plate appearances, well below the league average of 23.4.

With Aguilar under club control through the 2022 season, one would think consistent playing time for him would seem like a formality. However, the continued consistency the club has seen out of Garrett Cooper has seemingly complicated Don Mattingly’s thought process here.

Since the start of the 2019 season, Cooper, who missed 55 games due to recurring injuries to his calf, hand, and right knee, has been a productive bat while on the field. Encompassing 141 games—essentially a full-season’s worth of games given the increased frequency of player off-days—Cooper has posted a .281/.347/.459 slash line, hitting 21 home runs along with 24 doubles. Cooper’s 115 OPS+ in that time, per baseball-reference, places him 12th (along with Brandon Belt of the San Francisco Giants) among first basemen with at least 85 games played at the position.

Projected over a full-season, Cooper possesses true 25-30 home run power, something the Marlins would surely take what has long been a offensively-barren first base position in Miami.

Concerns surrounding Aguilar question whether his 2020-rebound was a fluke, while the questions with Cooper come more from whether or not he can stay healthy over the course of a full season. Age factors into this decision as well, with Cooper turning 30 on December 25th, and Aguilar expected to turn 31 on June 30th.

Unlike Aguilar, Cooper has demonstrated an ability to provide positional versatility, appearing in 31 games in right field in 2019, a position he has logged 269 innings in over the course of his career. With the National League adopting the Designated Hitter rule in 2020, Cooper and Aguilar each logged extended time there, appearing in 15 and 20 games respectively. However, given Commissioner Rob Manfred’s intention to bar the DH from the Senior Circuit in 2021, Cooper could find himself back in right field to start the 2021 season.

For a team still in throes of rebuilding, Miami would best be served having both bats in the lineup should it look to improve on its 92 OPS+, a mark which ranked 19th in 2020. And don’t forget, the Fish will have top first base prospect Lewin Díaz, who the organization has ambitiously compared to Carlos Delgado, lurking at Triple-A.