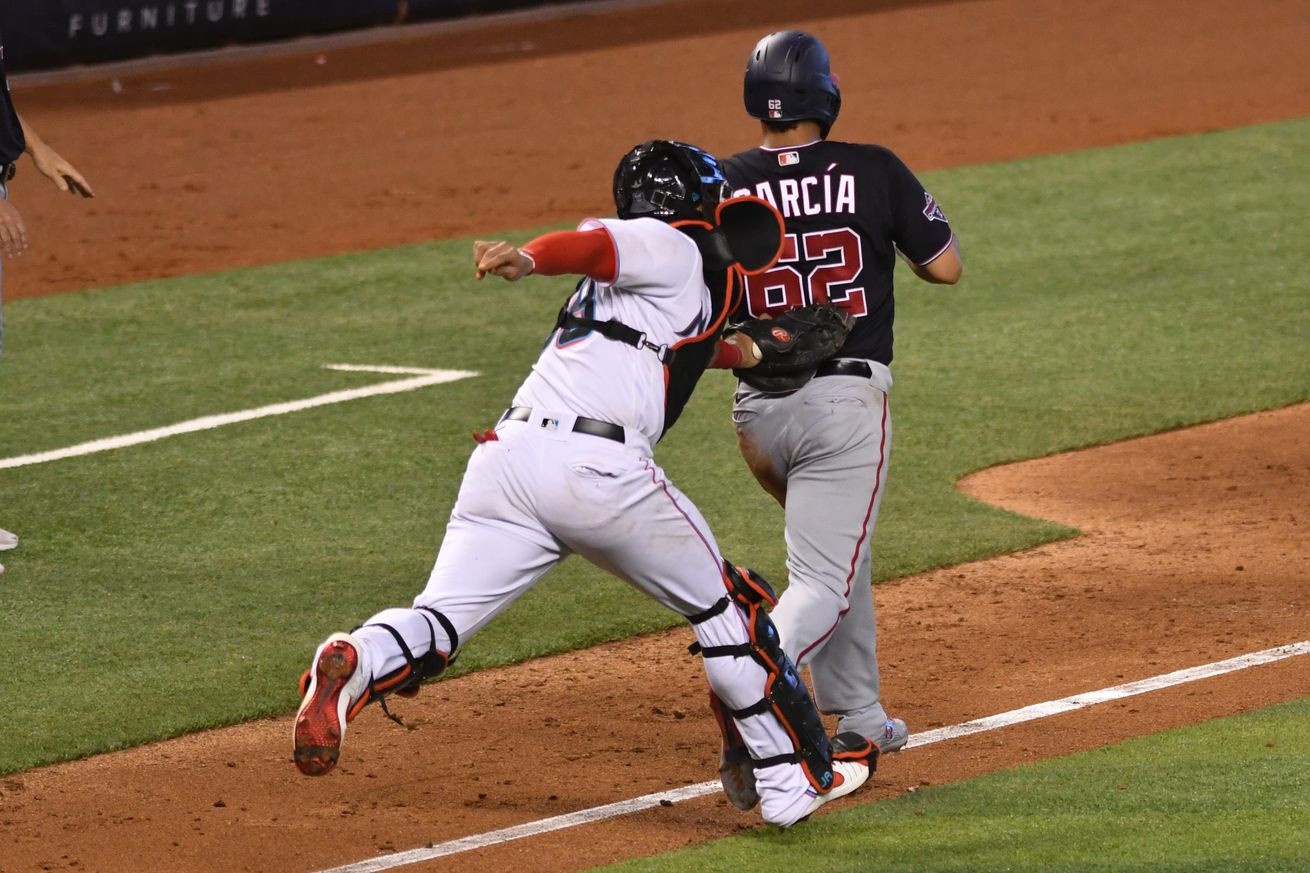 Runs were hard to come by in the opening game of Sunday’s doubleheader with two great starting pitchers facing off.

MIAMI—While the Miami Dolphins were stuck in a lightning delay at their roof-less stadium, the Miami Marlins enjoyed a nice 2-1 win over the Washington Nationals under the roof at Marlins Park…with a uniquely stressful ending.

Just like his outing last week against the Boston Red Sox, the 25-year-old Sandy Alcantara barely got run support from his offense. The Marlins struggled against three-time Cy Young award winner Max Scherzer, but Alcantara was just one run better on Sunday afternoon.

Alcantara was cruising through four innings, allowing just two hits and zero walks. His first true challenge came in the fifth inning. Alcantara allowed two walks and a single to load the bases with two outs. Trea Turner then hit a chopper that seemed to get 20 feet into the air. Brian Anderson corralled it at third base, but the ball hung in the air long enough for Brock Holt to score, tying the game at 1-1.

The Marlins offense had no issues getting on base against Scherzer, but runs were at a premium. Both Marlins runs came from poor defensive plays by Washington.

The Marlins took a 1-0 lead in the first inning when Matt Joyce hit into the shift at second base with two out. But Luis García made an errant throw to first base, allowing Joyce to reach safely and Corey Dickerson to score from third base.

With the score tied at 1-1 in the sixth inning, Starling Marte made a pinch-hit appearance with the bases loaded. He hit a ground ball to third base, but first baseman Eric Thames dropped the throw from Carter Kieboom, allowing Monte Harrison to score from third base.

With a one-run lead going into the final inning, Brandon Kintzler entered to close the game out. He had blown his last two save opportunities coming into Sunday, and the final inning looked like it was headed in the same direction.

Kintzler allowed two hits to open the inning, and eventually found himself with runners at second and third with one out. By a stroke of skill and some luck, Kintzler snared a comebacker off the bat of Trea Turner, and immediately turned home to catch Yadiel Hernandez in a run-down between 3rd base and home. Kintzler then struck out Kurt Suzuki to escape from the mess that he got into, and pick up his first save since September 5.

Fans watching from home didn’t get to experience the dramatic moment live—the FOX Sports Florida television feed was interrupted by technical difficulties at the precise moment that Kintzler began to deliver his final pitch.

Here is the final pitch for those who missed it

As of the beginning of game two of the doubleheader, Miami is 2.5 games back of the Atlanta Braves for first place in the division, while they are 1 game ahead of the Philadelphia Phillies, pending the result of their game against Toronto.