5:00pm: Frank Seravalli of TSN is reporting that Ekblad will require surgery to repair a broken left leg and is out for the rest of the season.

2:35pm: Last week, the Florida Panthers waived veteran defenseman Anton Stralman and moved him off the active roster. It seemed the team had made the decision that Stralman no longer ranked among the team’s best six defensemen, so he was moved to the taxi squad to open up a little more cap space. After all, the team had Aaron Ekblad to carry the right side, logging more than 25 minutes a night and playing the best hockey of his career. The team could afford to take their time and shop around at the deadline for a top-four improvement, knowing that Ekblad could carry the load. 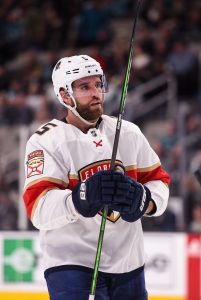 Ekblad, chasing a loose puck in the Dallas Stars end, got his feet tangled with Esa Lindell and fell awkwardly on his left leg. In a mostly-empty arena, you could hear the Florida defenseman cry out in pain immediately and stay down clutching his knee. The play was stopped and a stretcher was brought out to take Ekblad off the ice.

As Elliotte Friedman of Sportsnet writes in his latest 31 Thoughts column, it appears to be a long-term injury for Ekblad, which will change the challenge for Florida as the deadline approaches. The insider reports that the team was already looking to add a defenseman, but the injury “will add to the urgency” of the search.

Quite frankly, it will be impossible for the Panthers to really replace Ekblad, given how well he has been playing this season. Before last night he had played at least 21 minutes in every single one of his 34 appearances his season, including twice coming just a few seconds shy of the 30-minute mark. His 11 goals have him tied for first among defensemen and his 22 points were good enough for fifth on the Panthers roster.

Selected first overall in 2014, Ekblad has dealt with concussion and neck injuries in the past that have detoured his career path, but things finally were starting to come together once again. After turning 25 in February, he looked like a truly elite option that could anchor a top pairing for years to come.

That kind of player isn’t available on the trade market, though Mattias Ekholm of the Nashville Predators perhaps comes closest. Others like Vince Dunn have been linked to the Panthers in the past and it remains to be seen if the team is now looking for multiple additions. The Panthers of course still won that game against the Stars with ease, taking their record to 22-9-4. That’s just a few points out of first place in the entire NHL, meaning the time seemed right for a deadline push. Whether Ekblad’s injury will make them reconsider or buy even more aggressively will likely come down to price.