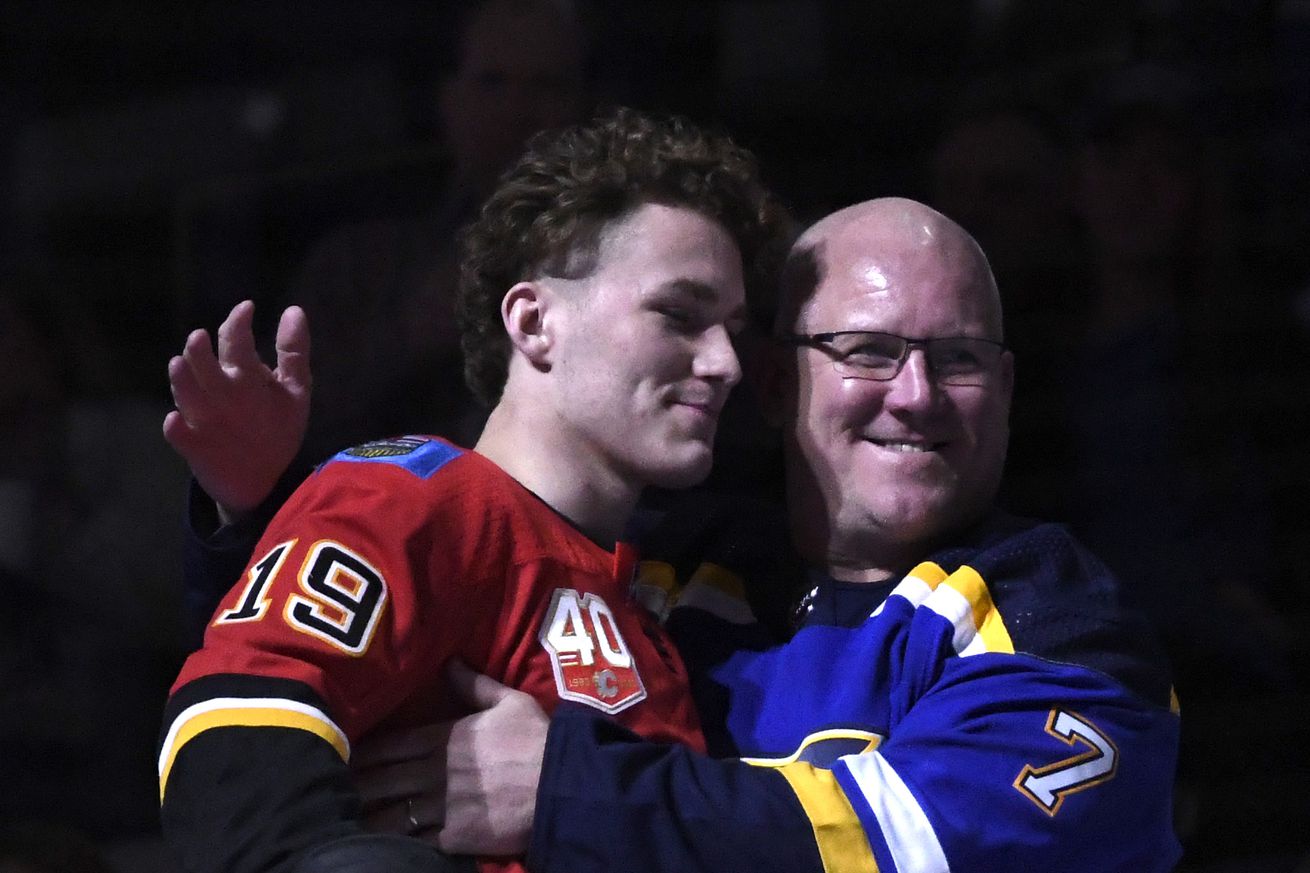 In of light of yesterday’s Father’s Day holiday, I thought it would be great to look back at some of the NHL’s most recent father and son combinations and rank the top ten pairs with the son still being an active player. I will only be ranking one father with one son, so the Nylanders, Tkachuks, and Folignos were all evaluated separately. Also, in order to be on this list, each father and son had to have a minimum of 200 regular season games under their belt. So, without further ado, let us check out some of these great dynamic family duos.

Paul Reinhart had an amazing NHL career with the Calgary Flames and Vancouver Canucks. He totaled 648 points in 559 games, as a defenseman that is pretty incredible. His son, Sam, was selected second overall in the 2014 NHL draft by the Buffalo Sabres, and has been with them ever since. In total, Sam Reinhart has produced 255 points in 400 regular season games.

The current general manager, coach, president, and owner of the Red Deer Rebels of the WHL had a lengthy and productive career in the NHL with the New York Islanders and the Chicago Blackhawks. Totaling over 800 points in his career, and winning three Stanley Cups in a row with the Islanders. He is no doubt an NHL great. Brandon, on the other hand, did not turn out to be a huge point producer, but a valuable asset nonetheless. He has recorded 277 points in 727 games with the Carolina Hurricanes, Pittsburgh Penguins, and Vancouver Canucks

Tie Domi is known as one of the NHL’s toughest enforcers of all time. His point totals definitely don’t stand out too much, but his penalty minutes total over 3,500. Max, on the other hand, is a natural scorer. In his time with the Arizona Coyotes and Montreal Canadiens, he has come up with 251 points in 375 games

Michael Nylander had a lengthy NHL career. In his tenure with the Calgary Flames, Tampa Bay Lightning, Chicago Blackhawks, Washington Capitals, Boston Bruins, and New York Rangers; he totaled 679 points in 920 games. Michael also has three World Championship silver medals, three bronze medals, and 2 golds. His son, William, although fairly new to the league, is having a lot of success with the Toronto Maple Leafs. In 307 regular season games, he has produced 221 points. He also has a World Championship gold medal.

The former third overall pick in 1979. Mike spent his playing days with the Detroit Red Wings, Buffalo Sabres, Toronto Maple Leafs, and finally the Florida Panthers, and had a phenomenal NHL career. During that span, he recorded 727 points in 1,018 games. That is a .71 point per game average. Son Nick, the current Columbus Blue Jackets captain, has also had a pretty good career thus far. In 908 games, Nick has amassed 466 points. He spent that time with the Ottawa Senators and the Blue Jackets. Nick also picked up some hardware along the way. He won the King Clancy Trophy and the Mark Messier Leadership Award after the 2016-17 season.

Dave Gagner had great lengthy NHL tenure. In 946 games with the New York Rangers, Dallas Stars, Toronto Maple Leafs, Calgary Flames, Florida Panthers and Vancouver Canucks; the skilled center had over 700 points. Son Sam has accumulated some good numbers as well, despite hitting some bumps in the road. The younger Gagner has put up 459 points in 844 regular season games thus far.

Keith Tkachuk is one of the best American-born hockey players of all time. Throughout his time with the Phoenix Coyotes, St. Louis Blues and the Atlanta Thrashers; Tkachuk recorded 1,065 points in 1,201 games. In the 1996-97 season, he recorded 52 goals, which won him the Maurice Richard Trophy for the most goals in the league. His first born son, Matthew, like William Nylander, is still rather new to the league. However, he made an instant impact as soon as he hit the Calgary Flames lineup. In 293 regular season games, Matthew has accumulated 235 points.

The late Jean-Paul Parise made a great career for himself in the National Hockey League. He suited up for multiple teams during his career, including the Boston Bruins, Toronto Maple Leafs, Minnesota North Stars, New York Islanders, and the long-defunct Cleveland Barons. In total, he scored 594 points in 890 games. Zach is also having a great career. In his tenure with the New Jersey Devils and Minnesota Wild, he has generated 792 points in 1,015 regular season games.

Thomas Steen is by far one of the most underrated players in NHL history. Don’t just take my word for it, ask his former Winnipeg Jets teammate and current NHL broadcaster Eddie Olczyk. In 950 games with the Jets, Steen recorded 817 points. His son Alex, has had a pretty successful run in the NHL. Not only has he recently won a Stanley Cup, he has also recorded over 600 points in over 1,000 games for the Toronto Maple Leafs and St. Louis Blues.

For the number one father / active son duo, I have the Stastnys. Peter Stastny had an amazing run in the NHL. In 977 games with the Quebec Nordiques, New Jersey Devils, and St. Louis Blues; he had 1,239 points; that’s a 1.27 point per game average. Although he never won the Stanley Cup, he did win the Calder Trophy as rookie of the year in the 1980-81 season. Paul has also created quite a name for himself in the NHL thus far. In 945 career games he has recorded 726 points playing for the Colorado Avalanche, St. Louis Blues, Winnipeg Jets, and new Vegas Golden Knights.